It’s tired already. The soundbites, the leaflets, the screaming newspaper headlines – when it’s this hysterical from the start, what will it be like come May? So what’s the real truth?

And you know what?

Prepare yourself for a shock: every single one of those hysterical accusations is true.

But not one of them is true for the whole country.

They may well be true for individual constituencies… Though no-one knows for a fact which ones, because voters change their minds. OK, with quite a few you can make a pretty good guess, and most of the time it’ll be right – but even then, it’s only a probability, and in only one seat at a time.

The newspapers and leaflets and soundbites that say it applies across the whole country – like the literally millions of Unite-funded Labour leaflets claiming it’s between Labour and the Tories in seats where the Tories are in a poor third place and there’s either a Liberal Democrat MP already or perhaps soon will be – are simply telling a massive, shameless lie. It doesn’t say much for any positive reasons for voting, does it?

Lib Dems Must Really Want To Be Either Labour Or Tory, Mustn’t They?

Here’s a newsflash. While Labour and the Tories both try alternately to insult, bully and love-bomb Liberal Democrat voters into supporting them, Liberal Democrats aren’t Labour or Tories. Most of us believe that the Conservatives and Labour are much closer to each other than they are to us: whether ideologically, with both hideously authoritarian; or on their near-identical records in government of green inaction, centralisation and warmongering; or just for a laugh about the Labservatives. But that’s a teeny bit of negativity coming through.

Let me ask a simple, positive question about why you think Liberal Democrats are Liberal Democrats: it’s much, much easier to get ahead and get power in a slightly bigger party that, thanks to the electoral system, has alternated in absolute power for most of the last century. I can see why people would become Labour or Tory even if they don’t really agree with them at heart, because, pragmatically, it makes a kind of sense. But given what a struggle it is even to be heard, let alone win power as Lib Dems – though we’re on 23% in the polls today, and have 63 MPs, when I joined we were on 19 MPs and struggling to make 5% – why on Earth would we bother if we didn’t believe in it?

Some Liberal Democrat supporters this election have got tired of all the negative campaigning and anti-voting, and set up a new Positive Voting site. Why not take a look? As opinion polls have often said – if everyone who said they’d vote Liberal Democrat ‘if they could win’ voted Lib Dem… Then we’d win.

If you’re passionately in favour of the Conservatives, or Labour, or any of the others, and if you’re really not keen on the Lib Dems… Well, then don’t vote Lib Dem. But why not take a look at what we stand for, if you’re not sure, and if you like what the Liberal Democrats say – then vote for us. Don’t be bullied into something you loathe fractionally less than something else.

Or you could just read Nick Clegg’s and Vince Cable’s top priorities.

For me, I’d say vote Liberal Democrat for fairness. For freedom. For a green future. To fight poverty, ignorance and conformity.

And because we’re the only party that’s had the honesty to put all the figures in our Manifesto so you can work out for yourself if the sums add up.

The more votes and the more seats Liberal Democrats win, the more likely it is that Liberal Democrat policies will count in the next Parliament. Even while Labour’s had absolute power on a third of the vote, we’ve still made the difference on issues like the Gurkhas and civil liberties: every Lib Dem vote increases the chance of a Lib Dem government, or at least of stopping the other two being able to do every single thing they want to without anything like majority support and let some new ideas in for a change.

Because, you see, electing MPs by proportional representation would all but eliminate feeling you have to make a choice between the lesser of two evils when there’s something better on offer. Of course it wouldn’t stop people and parties campaigning negatively in other ways – there’ll always be attacks, and that’s an argument for another day – but it would cut off at the knees most of those daft ‘voting X is only a vote for Y’ babbles. Your X would simply be your X – or, in the Single Transferable Vote system the Lib Dems prefer, your 123: putting it simply, most types of PR give fair shares but too much power to parties, but STV gives voters a double power. Not only does it reflect your votes in proportion, but it lets you choose which individual candidates you want, either within or across different parties. Sounds a bit technical? It would mean the safe seats that led to the lazy arrogance of the MPs who most abused their expenses would be swept away, too.

The Conservatives will never choose to back proportional representation – unless actually letting the people in is the only way they can get power. And we all know now that Labour will never change the system on their own. In 1997, they had the largest majority in the House of Commons (on one of the lowest pluralities of votes) for a century. They promised in their manifesto that they would hold a referendum on proportional representation. They had the power to do it: they didn’t. They made the same promise in 2001. They broke it again. Last year, with defeat staring him in the face, Gordon Brown promised a referendum on ‘the Alternative Vote’ – a half-way system does give preferential voting, but that’s often even less proportional than the one we have now (at random). Then, just a week ago, they dropped that policy in the House of Commons. Now they promise to bring it back after the election. Of course you will, Gordon. No. You broke your promise when you had power, then broke it again, and again: offering a much weaker policy at some time in the future doesn’t deserve a second glance (though you might take a pause to realise that the Labour leaflets pretending sitting Lib Dem MPs can’t win deceitfully pretend the country is one big seat, despite the fact they’ve been the main protectors of it being lots of little ones).

A vote for the Liberal Democrats is a vote to deliver real change. It’s not the only possible vote for change in all seats: if making every vote count is your main aim, then in Scotland or Wales you might look to see if Plaid Cymru or the SNP are ahead in your seat, while in one seat in England – Brighton Pavilion – the Greens have a decent chance. I’d argue even then that you should vote Liberal Democrat, of course, but that’s because I do passionately believe that we need a party that’s fair, liberal and green, and mine’s the only one that’s all three. And I’ve already given you my reason my STV’s a better, more voter-powerful system of proportional representation than those other parties support.

If you support any smaller party, or even if you are Labour or Conservative supporter, and you want proportional representation, so every vote counts – then in nine out of ten Westminster Parliament seats the Liberal Democrats are almost certainly the party which is best-placed to gain PR. So, why not give us a try? If enough people support us this time, we are committed to changing the system – and then all those leaflets can go in the dustbin, and you can vote safely for your first choice for ever afterwards. Where the Labservatives want to scare you into voting for them by keeping the crooked system that might make you feel that’s necessary, the Liberal Democrats want to break open the system and run the risk you’ll then feel free to run to someone else. I think that’s a better way, don’t you?

And finally (courtesy of my friend Andrew)… Who do you get into bed with if you vote Liberal Democrat? The dreadful truth! 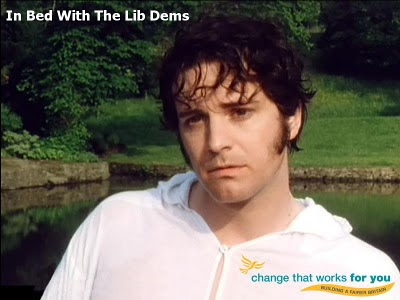 Wouldn’t it be awful?