How Paddy Ashdown Changed My Life (and How the Police Might)

Some days change your life. Some people do. Twenty years ago today I was a teenage activist at my first ever Liberal Democrat Federal Conference, and I was told off by Paddy Ashdown. But not in the way you think. And given that, though I’ve not missed an Autumn Conference since, I may well not be at next week’s Conference because I’ve still yet to hear if the police – the police – will deign to permit me to take part in our democracy, Paddy’s moral is very resonant today. So what was it that our then Party Leader said?

The day before, I remember I’d met Paddy Ashdown for the first time, and had the first of what were to be a great many arguments with him. A set-piece Conference debate had called no cards against, despite quite a number being submitted; I remember that mine was one (another year before I got to make my first Conference speech, when I went into such a spectacular rant that I managed to talk over time. And cause our then Leader in the House of Lords to walk off the stage behind me), and that another was from someone who’s now a leading MEP. I strode up to Paddy afterwards and asked him if he thought that was right. He said he didn’t, and that I should challenge it – then blasted the arguments I would have used had I been called to pieces. Across the next decade, I had more rows with Paddy than I’ve had with any other Leader, but it’s those rows, and that first one, that earned him my undying loyalty, even when I thought he was absolutely wrong. When I was a mouthy young activist who no-one had ever heard of, there were plenty of party bigwigs I wanted to take to task, and more than a few refused to engage with someone as unimportant as me. Even when Leader, Paddy never looked down on ordinary members, and if you wanted to argue with him, he’d argue. And quite rightly, he never patronised you, either: if you were talking bollocks, he took no prisoners.

So why did Paddy admonish me and other Student Lib Dems that day in Bournemouth? That afternoon, there was a Conference debate on a policy paper called Science and Survival. I remember it vividly. Various party grandees, particularly those working in the House of Lords and in higher education, had used the paper to decree that the best thing for all young people was that they be required by law to be in education until the age of 18. I and a bunch of other Student Liberal Democrats, though most of us were just past 18 at the time, were quite aware of the party’s commitment to votes at 16, and thought that superannuated worthies commanding what ought to be voting adults what to do – ‘for their own good’ – was the sort of thing Labour did, and that Liberals ought to give a good kicking to. We pushed that clause to a vote; by my reckoning, we won, but that’s not what the chair of that debate thought, and he refused our shouts for a count of the votes.

That evening, Paddy held a private meeting – as he used to every year – with all the Student and Young Liberal Democrats (as was) at the Conference. The practice was, he’d turn up (usually turning a chair round and slinging his jacket over his shoulder) and we could ask him whatever he wanted, no topics barred… But no cameras, no recordings, and absolutely no journalists. I still remember my satisfaction on getting sleazy Times hack Alice Thomson thrown out of one a couple of years later when she’d lied her way in; yes, I know, a Murdoch employee listening in on people by deceit? Who’d have thought.

But on that evening in Bournemouth, the first thing Paddy did was not answer a question, but put one to us. He’d been in the debate that afternoon, and he’d disagreed with us – but he thought we’d backed down too easily. We should have forced a proper count of the votes. And he saw that as symptomatic of the (then separate) Student and Youth wings of the party since he’d become Leader, and asked us why that was: “You’re not causing enough trouble.”

Imagine the mortification when your Leader – who knows that the founding principle of Liberalism was to control arbitrary power – is the one who had to tell the rebellious young people that they’re crap at it. But mortification wasn’t my only reaction. I made two resolutions to myself at that very moment: because this hadn’t been a failure of will, but of knowledge, that I’d find out what the correct procedure was for demanding a counted vote, and if necessary challenging the chair of a session [tip for next week: turn to page 63 in your Conference Agenda]; and that Paddy would never have to tell us that twice.

Over the next half-dozen years, the various Liberal Democrat Youth and Student bodies bombarded Conference with motions and amendments that took great care to get the procedures exactly right, and as a result had more of their policies passed by Conference than anyone else but the Federal Policy Committee. And when, in 1994, the Conference debated drugs and the monarchy – despite remarkably heavy pressure from many grandees for us not to – and the party voted (for the first time) to look into decriminalising cannabis, Paddy stomped off the stage and was heard to suggest that when I appeared in The Guardian and on air quoting his instruction to us to prove that it was us, in fact, who were the party loyalists and doing what the Leader told us, he didn’t think it was particularly funny (one BBC radio interviewer did, though; that line made him corpse in mid-broadcast. I can’t imagine why).

Who Needs Teaching A Lesson?

Today, it seems, the Liberal Democrat Federal Conference Committee are avoiding the awkwardness of people standing up in Conference and quoting the standing orders by allowing the police to break the Liberal Democrat Constitution that puts the so-called Conference Committee in authority in the first place and stop ‘troublemakers’ from coming in at all. Even people arbitrarily prevented from exercising their democratic rights in person, of course, should still receive their ballot papers when it comes time to rightly vote out of office every single cowardly illiberal spineless quisling craven renegade gutless undemocratic pathetic unconstitutional pusillanimous police state member of Conference Committee. As the elections are biennial and this is the ‘off’ year (in so many ways), I wonder if an emergency motion of no confidence could be moved in the lot of them*? Just a thought.

I wonder if Paddy would have something to say about that? I know a lot of other people do.


Oh, and – particularly if you’re a member of Liberal Youth – remember those wise words of Party Leaders gone by, never officially rescinded, and make sure that you obey the Leadership and never, ever give Nick Clegg cause to complain that you’re not causing enough trouble. 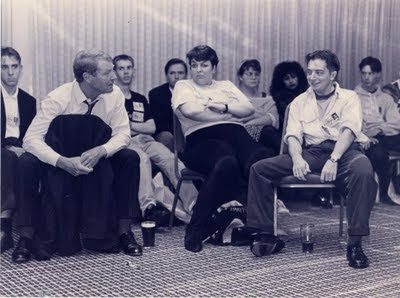 *Update: Excepting Justine McGuinness, who I am reliably informed was the only member of Conference Committee who voted against kowtowing to the police demands.

I may be old enough to remember Paddy Ashdown and (according to the pictorial evidence) when the world was in black and white, apparently, but I can't remember Max Boyce ;)

Fab photo. Fun trying to name all the people in the back row...