A Liberal Britain. A Brighter Future. My Hope.


I’m a Liberal and I want a brighter future.

This General Election hasn’t been about that. I’m sick at heart of the Theresa May—Jeremy Corbyn—Brexit bad trip to a meaner past.

But the hope of a Liberal future keeps me going.

My vote on Thursday will not be just to stop the Conservatives / stop Labour because though both are s**t I’m marginally more afraid of one than the other. I can’t vote to make Britain just a bit worse.

Here’s my hope of a future worth voting for.

Do you want a brighter future?

Because if you do, then I should warn you – it’s going to take all sorts of things. Making society be for everyone, so everyone can be free. Finding long-term funding for the NHS and schools. And not being afraid to reconsider when things go wrong.

It won’t be easy answers, fear and blame.

But I’ll tell you what it could be…

Britain, 2030. A Liberal Democrat government, and a decade since Britain voted against the mayhem of a disastrous bad Brexit deal and changed Britain’s future.

The biggest change was the one no-one expected. It was Brexit that broke Westminster. The Prime Minister no-one elected ordered everyone to obey. The government without a plan grabbed for more power than ever. But the more they tightened their grip, the more people slipped through their fingers. Their extreme Brexit mess brought Britain to the brink of disaster, yet they never took responsibility for their own incompetence and they still tried to stop anyone having a say. Labour just split four ways and fought each other. But with popular pressure (and all those Lib Dem gains), even MPs rebelled. A new hope. When Britain had another choice, we threw out the idea of government control too.

The Liberal Democrat government came to power to bring everyone together, admitting they wouldn’t always know best and promising to listen all the way. Principles first, then consulting people, testing plans out to make sure they work, building consensus – that’s how changes happen now. The age of imposition leading to massive screw-ups is over.

It’s much easier to be heard and make a difference. Britain’s nations, regions, cities and counties took back control from one-size-fits-all Westminster. With real power distributed, economies across the country are stronger. Fair votes mean you get what you vote for and can hold them to account. With the end of safe seats, some Labour and Tory MPs gave up, but now all parties have to work harder and listen more. And whether the best place to use power is locally, nationally or internationally, the most important place to take decisions is you taking power over your own life.

The NHS has the money it needs and now treats mental health as urgently as physical, but it’s also helped by preventative health and reducing pollution.

Schools have the money they need, but they’re also helped by tackling child poverty. Better education, training and apprenticeships enables everyone to have opportunity to realise their potential, whatever their background, whatever their choices.

At last there’s a government willing to tell it like it is. That people want to come to Britain because it’s a brilliant country with British values of tolerance, freedom and standing up for the underdog. That there’s no way to stop that without tearing down so much that’s good about Britain. And why should we want to? Openness and compassion have always made Britain a brighter country for everyone. And for the people for who still want Britain smaller and meaner, if you want the economy to thrive to support our NHS and schools – if you want the people to work in our NHS and schools – then we have to welcome migrants too.

At last Britain’s leaders are in tune with Britain’s bigger values. It’s made such a difference to have a government valuing diversity and inclusion, refusing to find groups to blame. The Liberal Democrats set their mission as freedom for everyone from poverty, ignorance and conformity. They tackled inequality and prejudice, saying whatever your sex, race, class, sexuality, gender identity, disability, belief or background, you were part of society, the barriers stopping you getting on must go, and we should all look out for each other when we need it. That was the turning point against the rise in hate crime a decade ago.

There’s more freedom and less crime. Everyone has the liberty to live their lives as they choose (without harming others) after scrapping victimless crimes that waste people’s lives, waste public money and waste police time. Now police get to chase the real crooks, far fewer young and ethnic minority people get criminalised, and the Cornish economy’s booming on the cannabis crop.

Remember when governments always acted like people were simple and taxes had to be complicated? That was the wrong way round. Now everyone pays their fair share and can see where the money comes from, and small businesses flourish because the wealthiest can’t find loopholes.

Britain is becoming more respected again in the world. It’s been hard work. After decades of shouting insults instead of wanting to make Europe work, a lot of our European partners were just fed up with us. But it helped that there was relief all round when Britain voted not to keep trying for a much worse deal than we had to start with by leaving, and instead at last to get stuck in and change the EU for the better. Making it more democratic, decentralised and open. Encouraging both free and fairer trade in and beyond the biggest single market in the history of the world. Standing up against racism and intolerance. And young people feel like they’ve got their future back.

Above all, Liberal Britain has turned to the future. Innovation and enterprise are getting results. Green jobs are leading the economic revival as internationalist Britain becomes a leader in zero-carbon technology to tackle climate change. With environmental and economic responsibility at home, we’ve stopped leaving problems for the next generation to tackle, and started addressing intergenerational equality.

Not everyone’s happy. For bullies, busybodies and bigots it’s much harder to push others around. But life’s better for most people who want control over their own lives, not control over everyone else’s.

A Liberal Britain by 2030 isn’t a certainty. It’s a choice. And you always have more choices. You can stay back and let things happen. You can complain there isn’t a better yesterday. Or, every new day, you can decide to get stuck in and help make a better future. 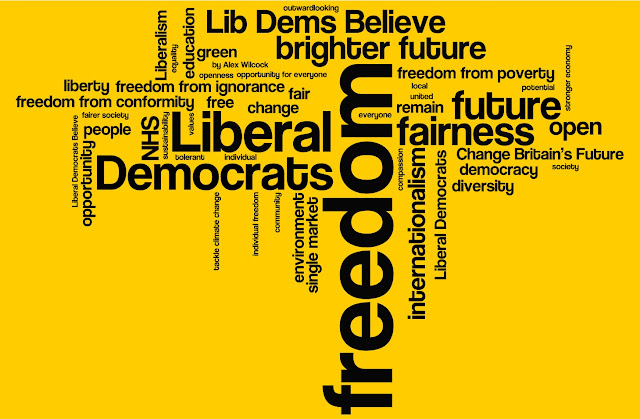 Why I’m Looking Forward To Britain In 2030

My health has been almost as crappy as the election campaign and I’ve not been able to do much. And the election’s not cheered me up, to put it mildly. I’ve not had the mojo to write.

But this January the inspiring people at Your Liberal Britain ran a competition to imagine what a Liberal Britain might look like by 2030, and I wrote something for them then. Here it is.

I hadn’t been expecting a General Election, either.

You might have recognised some of the words, some from unexpected places, but not from our Manifesto. The way I’m most on-message, it turns out, is that the Lib Dem Manifesto is Change Britain’s Future and the party’s been campaigning for a Brighter Future. What I’ve published above was almost all written in January, but after using “better future” a lot in mine I’ve decided that I like “brighter” better. So I changed a few of those.

The Your Liberal Britain competition asked for 500 words. I wrote nearly a thousand in one big rush and, having left it until the deadline, was hacking bits out all evening to try and reduce my word count. I remember deleting one paragraph at five to midnight just because it was the right length. I didn’t much like what I slashed down to 500 words, and I didn’t win with my 500 words. Now I come to share my words, I’ve kept the ones I liked. 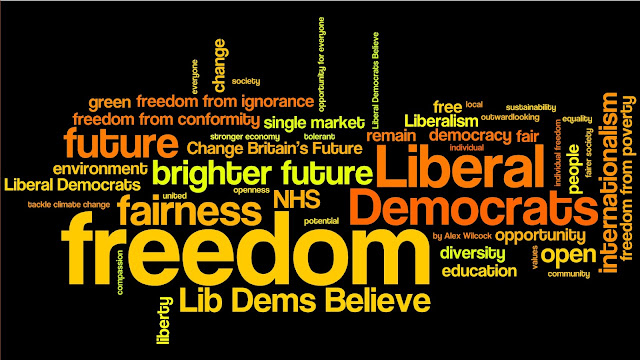 Every day in the 2015 General Election, I chose an inspiring Liberal quote from a wide range of people. You can see all the variety of Lib Dems Believe here.


Me on video in 2015: Liberal Democrats Believe

Me on video this year: Another Vote – Another Disappointment?

Your Liberal Britain: all sorts of goodies, and worth coming back to after the election for more inspiration and more consultation. I’ve not had the spoons to do all the Lib Dem philosophy I want to over the last couple of years. I’m thrilled these new members have been doing way more than I ever could.


And of course the official version – the 2017 Lib Dem Manifesto Change Britain’s Future, free to download in a range of accessible formats.


Now, please, if you found any of this moving, or inspiring, or just some hope, go out and vote for it.