The Liberal Democrats are in the middle of our most exciting (and certainly our most positive) Leadership election in over a decade. I’ve not been well enough to make it to the hustings, but I also have questions I would like to ask the contenders. So I’ve sent three questions to Jo Swinson and Ed Davey, each question framed by a contentious scene-setter, starting with the one I’ve asked as many Lib Dem candidates as I can for about twenty years. Thank you to Jo: here are her answers. 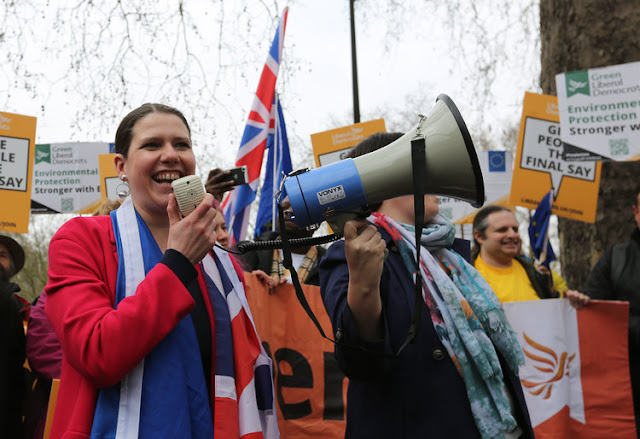 
Question One:
People say all politicians are the same. Lib Dems have often seen moderation, working with others and compromise as virtues, to the point of the caricature that a Liberal is someone so fair they don’t take their own side in an argument. So what really motivates you?
When someone asks you on the doorstep, the hustings or on TV to sum up in one or two sentences what the Lib Dems, uniquely, stand for – and why anyone should vote for us – what do you answer?

“Jo believes that people should vote for the Lib Dems because we are the only party who are campaigning to truly improve the things that are most important to them – building an economy that puts people and the planet first, targeting rising inequality, the climate emergency, and fixing the broken social safety net; harnessing the technological revolution for Britain’s future, making sure that the benefits of automation and technological change aren’t just felt by the richest but by the people whose jobs and lives are set to change; and fixing our broken politics by working together, reaching beyond tribal politics and the damaging rhetoric being espoused by populists and nationalists, building a co-operative democracy that works not for our own successes but to improve the lives of our citizens.”


Question Two:
Nancy Seear’s answer to how the Liberals survived near-extinction in the 1950s was: “We didn’t like the Tories and we didn’t trust the state.”
The Lib Dems seem to be emerging at last from another extinction-level period.
What two ideals made us survive this time, and what can we learn from that?

“What we’ve seen since 2010 is an astonishing tenacity of people who have always been liberals, and an openness to new members and new ideas. This combination has seen our membership grow to its largest number ever – filled with people who have never joined a political party before and who have been welcomed into the Liberal Democrats. These members have helped to make us relevant again and their enthusiasm is what pushes us to win.”


Question Three:
The Tory Leadership contest went up in smoke over what drugs they’ve all used that they say should be illegal for *everyone else*.
When it comes not just to drug use but to any ‘victimless crimes’ that a lot of people disapprove of but which don’t harm others, should ordinary non-MP adults giving their informed consent be criminalised?

“Lib Dems have been clear over a long time that criminalising people for drug possession and consumption is counter-productive and should be stopped. Our policies in general shy away from any unwarranted criminalisation – focusing on the harm principle that if your actions harm someone else, they should be stopped, but that anything else needs serious consideration and debate before we look to involve the criminal law.”


I sent Jo and Ed these questions three weeks ago, followed by reminders. Jo’s team replied one week ago with a very reasonable apology – unsurprisingly, people have been asking Jo a lot of questions. I was in the middle of drafting an article to go with the questions and was going to publish Jo’s answers as soon as I’d finished it… But, finding it harder and harder to write these days, I’m still very slowly chiselling my thoughts and have only managed a paragraph or two each day of a rather difficult week.

Having sent me her answers, it’s unfair on Jo and her team for me to keep delaying. So it’s my turn to apologise to Jo and publish. And if I can finish writing something before the Leadership election actually closes…