Doctor Who – The Leisure Hive: A Perfect Holiday Moment


On this day in 1980, Doctor Who returned for its Eighteenth Season with a blaze of sound and colour in The Leisure Hive. The Season is the ultimate in Who ‘concept albums’ and its opening story is a bold statement, the director’s ambitious visuals, faster edits and movie-style camerawork revolutionising the show’s look (and breaking its budget). Yet the story opens with a shot so infamous that almost everyone calls it a disaster. For me, it’s a truly great moment and Doctor Who’s most sublime comment on Summer Holidays. 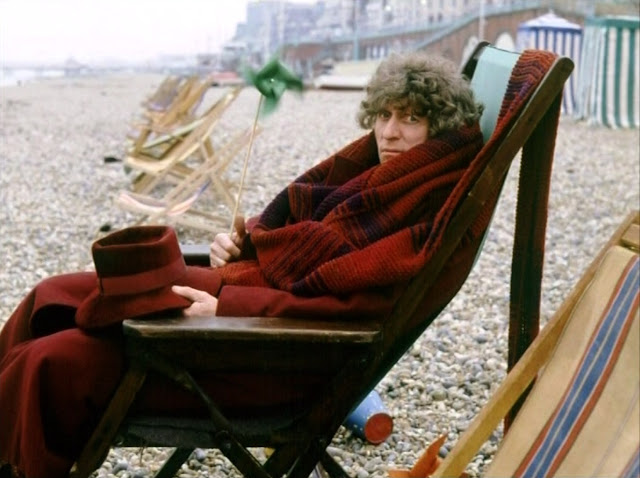 “I don’t think much of this Earth idea of recreation.”

When I was a boy, this time of year meant two things – going back to school, and the return of Doctor Who to our screens to sweeten the pill. It wasn’t just Doctor Who’s scariness that made it ideal viewing as the nights started drawing in. It was that the new Autumn Season often opened with stories that deliberately reflected that ‘end of Summer holidays’ feel on screen. Terror of the Zygons and The Masque of Mandragora combined holiday destinations with putting shivers up my spine in Bob Holmes’ mission to “frighten the little buggers to death”. The Ribos Operation opened with the Doctor about to go on holiday, at which point the light fails and it ends up snowing, which seemed like half my Dad’s travel plans. Or what could be more ‘British Summer’ than a trip to the seaside when the weather’s horrible and the driver’s telling you you ought to be enjoying it and it’s not his fault about the cold or the wind or getting lost in the fog…? That was Horror of Fang Rock (the first episode of which I missed because, inevitably, we were stuck in traffic jams and complaining all the way back from the sea). But no story ever evoked the end of the Summer holidays more perfectly than The Leisure Hive. 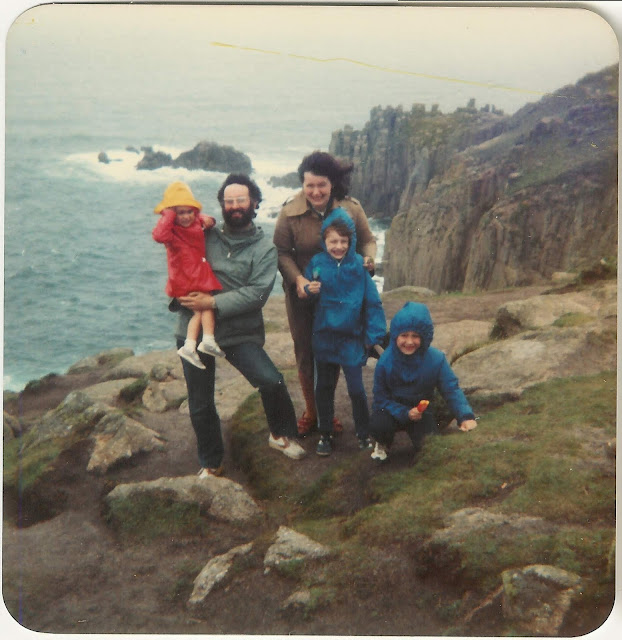 There is a Wilcock family photo taken at Land’s End in Summer 1980, mere weeks before The Leisure Hive Part One first aired. My Dad is beaming defiantly, brandishing my clearly unhappy little sister; my Mum bracing little me to try and stop us both being blown over the cliffs; my little brother sensibly crouching against the ground so that, if we all went, he wouldn’t be going over with us. But in the driving rain and bitter wind, in flapping kagouls, my brother and I are holding ice lollies in our numb fingers. The things you remember: mine was a blue Star Trek – The Motion Picture tie-in ice (probably chosen more so it would turn my tongue blue rather than to accessorise with the fingers holding it, but it worked for both). You’ll goggle at that photo and wonder, what were we thinking? The day was grim, the rain was slicing through us, the wind was chill and threatening to whip the lollies from our stiff little fingers if it couldn’t bowl us to our doom, and yet there we were, clutching things that could only make us colder. Why? Because it was Summer, damn it, and we’d been told we were going to ‘enjoy ourselves’ on pain of frostbite and smile for the camera. 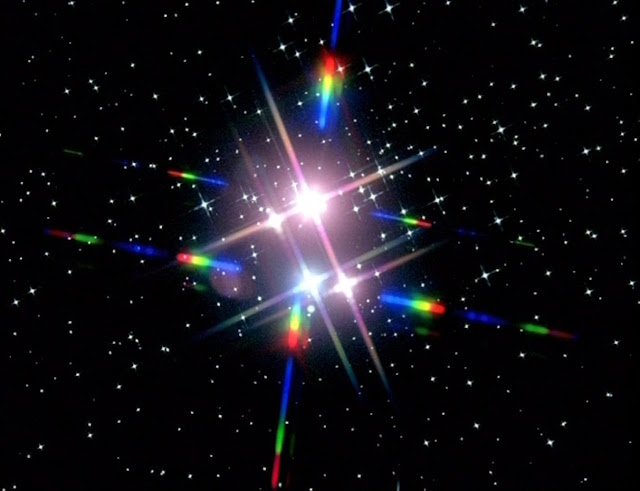 “You’ve got the century wrong, you’ve got the season wrong, and you’ve got K9’s seawater defences wrong.”
“Well, I can’t get everything right.”
“Just something would be a help.”


A summary of The Leisure Hive’s opening scene might be that the Doctor has taken Romana and K9 to Brighton, where his holiday plans go awry. He’s missed the opening of the Pavilion – again – and is sitting in a sulk. Romana chucks a beach-ball in the sea for K9 to fetch, only to find that the Doctor’s not sea-proofed him. She heaves the exploded robot up the beach to the Doctor, complains, then suggests they go on an improving trip to an alien resort instead. So they do. That’s what happens in theory, but it misses what’s entertaining about it almost as much as – to pick one review among many – Tat Wood’s livid screed in About Time 5 that “they wantonly began the season with the dullest one-hundred seconds of Doctor Who ever”. 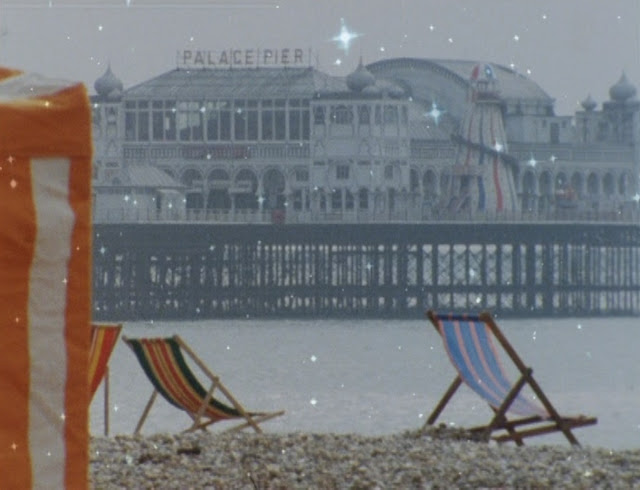 After six years of Tom Baker as the Doctor with every episode opening through a swirling blue time tunnel and an only slightly remixed version of the Doctor Who Theme used since 1963, The Leisure Hive blasts into life and into the ’80s with blazing, bright stars streaking across space and a WHOOOM! howling new electric version of the theme. Most of the story will be set on the alien world of Argolis, a holiday bursting with fabulous colours, arresting angles and rapid edits, a glorious electronica score from Peter Howell to build on his new theme arrangement, three utterly stunning cliffhangers in a row, magnificent vistas, war, money, science and murder. 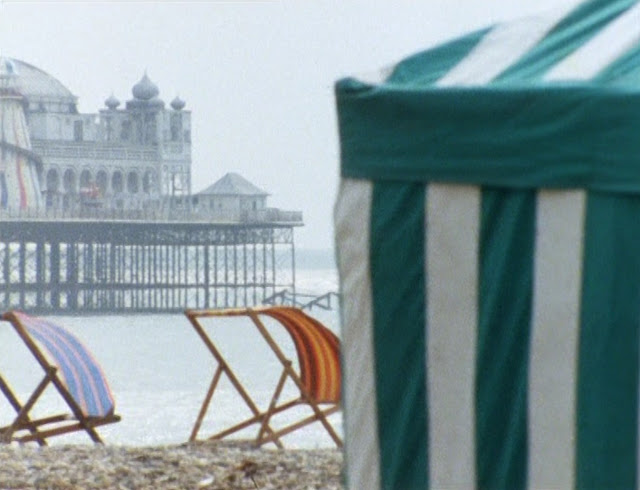 But first, it makes you wait. 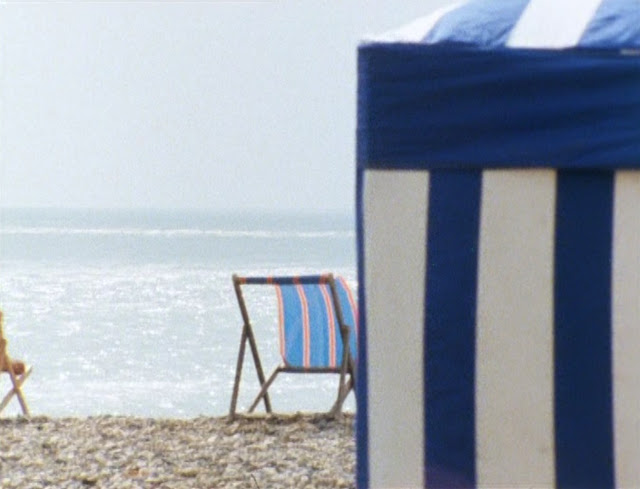 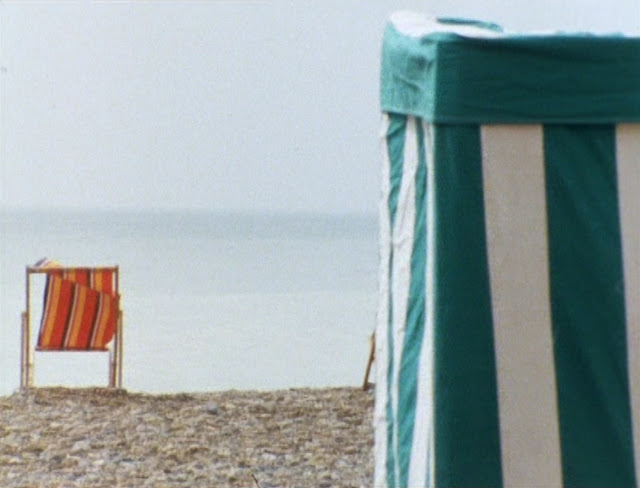 The Doctor wrapped up against the biting wind but still sitting on the beach anyway was something a British audience would instantly recognise and enjoy. 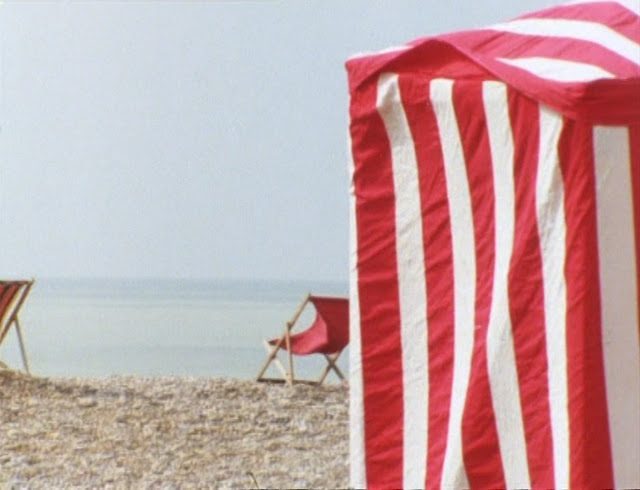 It’s still a brilliantly – almost absurdly – audacious move to start with an unbelievably long panning shot, and I still love it. Yes, it makes you wait, but only after it’s grabbed your attention with an explosive new title sequence and theme that nobody was expecting, which is a big tease. It’s not ‘padding’ or ‘longueurs’, but – with the first few minutes and those few minutes only set for Brighton beach – very much planned, and brave, and stylish, and though as with many brave and stylish things not everyone would get it, it’s also very funny, and fantastic in context. 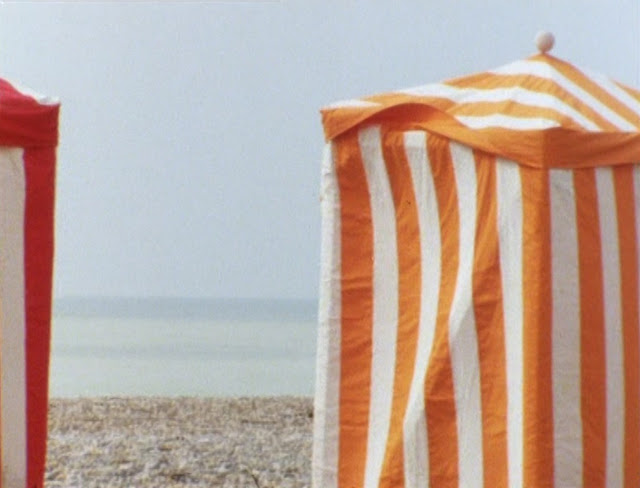 To complain about the ‘dreary’ beach is to entirely miss the point of it being broadcast on August 30th. Everyone who’s just got back from a dreary British holiday when it rained in the cold will cheer when they see the Doctor wrapped up on the beach, determined to stick it out like everyone’s Dad, and young Romana saying ‘But can’t we go somewhere more exotic and exciting?’ like all the kids. And then they do! And everyone who’s just been somewhere exotic and exciting will feel smug to start with, confirmed in their view that they made the right decision, then realise that however exotic and exciting their locale, the Doctor can still go somewhere that beats it, and be drawn in. For me, it’s a stylish opening on its own, but in context it’s a perfect one. 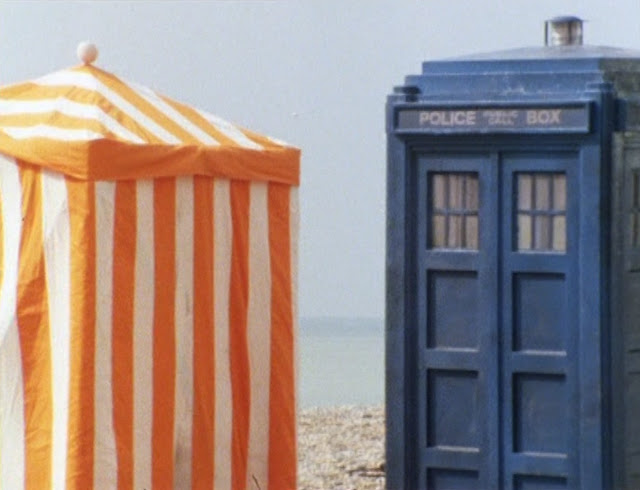 Given a very short scene to open the story and a filming allocation for it on Brighton beach, what else would you do with it? The director succeeds in being witty, stylish and creative, and – not something for which he was famed – definitely getting his money’s worth. I suspect that as well as being a signature for new Producer John Nathan-Turner, the Brighton scene was planned as somewhere striking for all those photo-shoots of Tom’s new costume and Lalla in a bathing outfit while getting some filming in too, to visually establish the story’s holiday theme, and perhaps simply to give viewers something reassuringly ‘normal’ to lure them in before soaring off somewhere amazing. 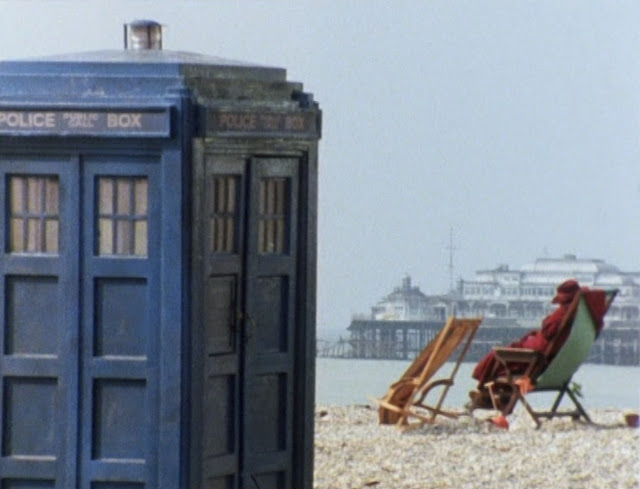 The DVD (and now Blu-ray) commentary mixes Director Lovett Bickford, Script Editor Christopher H Bidmead and Romana Lalla Ward, and while each are excellent separately, together they wind each other up so much that you have to take turns finding each of them unbearable. But this moment starts as they’ll go on: Chris pans the minute and a half pan. Lovett superbly responds with “It’s the perfect length.” And Lalla says it makes a change from being in the TARDIS “with that thing going up and down” (Tom Baker, as we call him). Chris and Lalla agree it looks like an Italian art film, which Lovett is very happy with, though I’m not certain either of them intended it as a compliment. But Lalla is spot-on for me, sighing, “God, it’s so like the kind of British holidays, this set-up, that one dreaded so much as a child.” The one thing about the panning shot where the director missed a trick: the camera pulls past a blue and white-striped beach hut… Which for an instant makes you think of the TARDIS. But there are several more colours to come before the suggestion’s realised. The TARDIS should have been the next one after the blue. 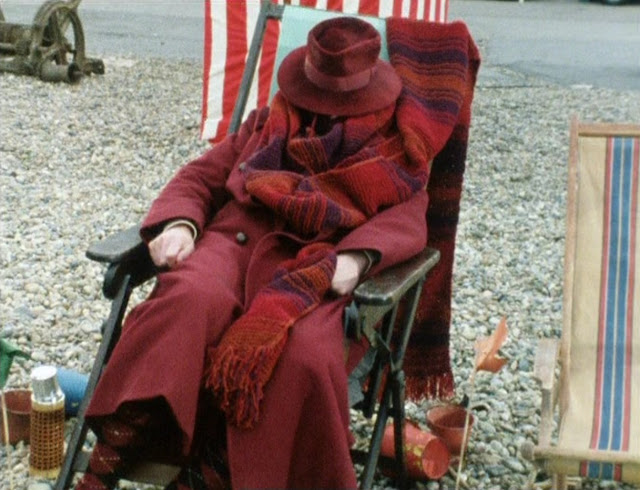 “Well, I can’t spend the rest of my life running away from the Black Guardian.”
“We should be safe here. I shouldn’t think even he fancies freezing to death on Brighton beach.”

Romana arguing with the Doctor is shot as beautifully as medieval monarchs issuing challenges on the field of battle, framed by what seem to be pennants fluttering in the wind. And then you realise, gloriously, that the camera’s filming them through the seats of deckchairs. As in any family bickering, Romana first tells the Doctor off for bypassing the Randomiser – previously crucial to stop them being found by a terrible enemy – merely because he fancies going to Brighton, and then about-faces her complaint to say that she wanted to choose a deliberate destination, too, but not one as rubbish as this. And on the Blu-ray, you can see that it really is cold enough that their breath is steaming as they speak. Naturally, while she’d sulked at K9 when he was bobbling endearingly over the shingle prattling of holiday resorts, it doesn’t stop her doing the same to the Doctor once the two of them between them have managed to put K9 out of action. That, too, is a brilliant gag, played absolutely straight – the press had already reported that the tin dog was to be written out in a few stories’ time, so his trundling from a “DANGER” sign in the background down into the sea is hilariously shot from the floating beach ball’s perspective as ominously as Jaws, with peril-zooms before they shock-comedy blow him up in the Season’s very first scene. 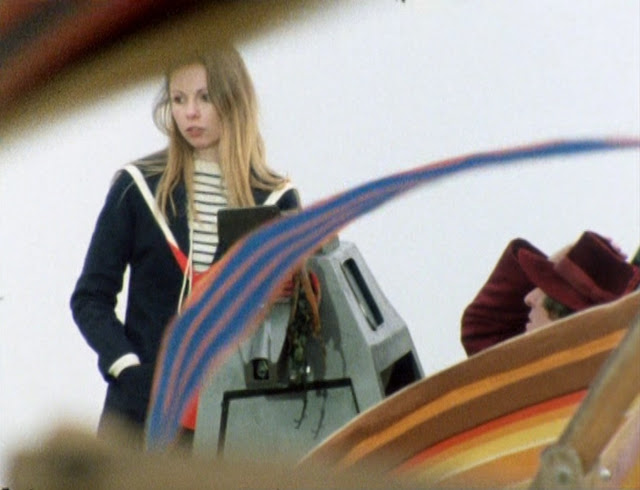 The mix of stylish and send-up in the direction ends the scene, too: the Doctor goes back to sleep as Romana tries to interest him in the planet they’re going to head for; but an absolutely gorgeous pull out takes us to the whole beach and then out to space as Peter Howell’s music takes us into Argolis. It’s another fantastic shot, and the real story’s only just about to begin. 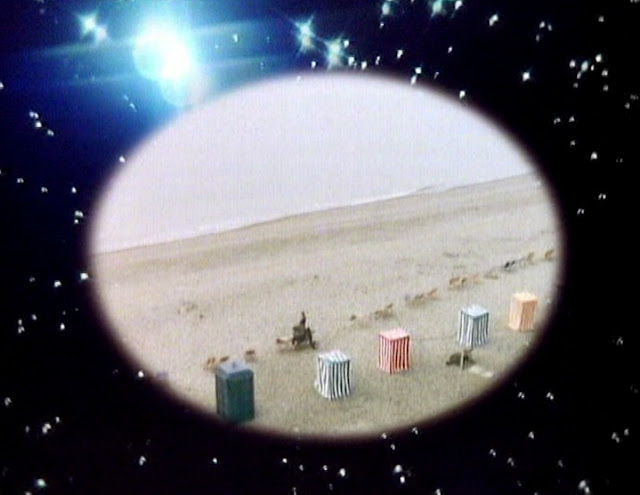 When the Doctor and Romana get to Argolis, they find that the people are obsessed with a War which was over decades ago, that the place has been reduced to one big tourist attraction, that it’s run out of money and is falling apart partly because of greedy chancers deliberately running the place down so they can make a killing, and then that a pathetic wannabe who wasn’t even born when the War happened is so thirsty to do it all over again he mounts a fascist coup.

Which just shows how exotic travel destinations date, because now we can get all that at home. 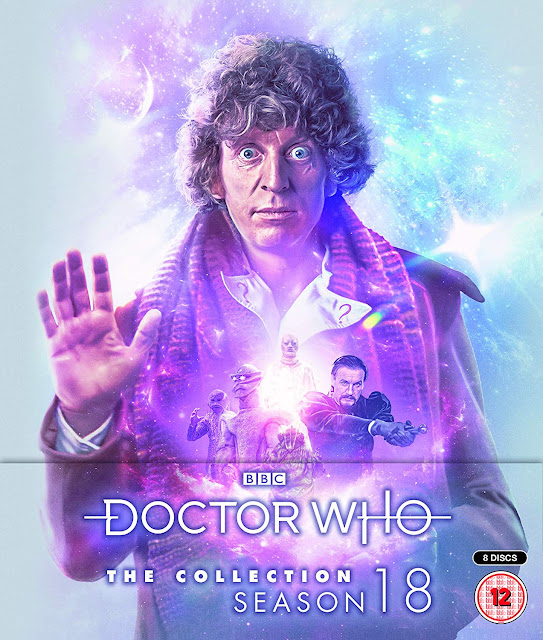 This has been much more about the director than the script, but The Leisure Hive is the final script by David Fisher, for me the finest Doctor Who scriptwriter of the late ’70s and possibly the most underrated Who writer on TV. He brought not just intriguing stories but a light touch and more than a hint of sex (which you can find in The Leisure Hive, too, if you look for it). His earlier The Androids of Tara is even more delightfully Summery both in look and tone, despite having been transmitted through November and December. Having spent all day composing two thousand words about the first five minutes, I might be able to write about just why I love the story proper by about 2029…