I like Bourbon Creams. I’d not baked since school. In 2015 someone sent me a recipe for home-made bourbons. I don’t know where they found it, but it worked for me. I’ve baked them four times, and not only were none of them disasters, I thought they all tasted great (presentation could be better).

If you want to try them, here is the recipe for your baking / eating pleasure. 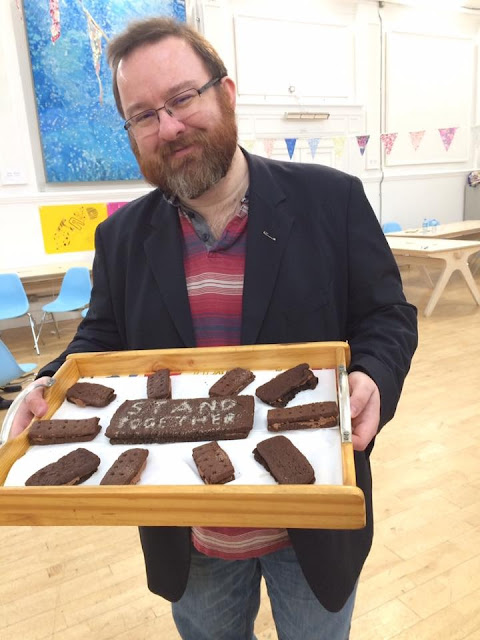 Alex and the Giant Bourbons – Me at a Tower Hamlets Stand Together Community Feast in 2017, holding a tray of my bourbon creams arranged in a starburst with a giant “STAND TOGETHER” biscuit in the middle

[Blasted Blogger is still not letting me upload pictures from my PC and I’ve had to faff around with my phone again. Grrr]


I’ve not baked these biscuits for a couple of years and, while enjoying polishing off some ASDA home-brand, regretted that I could do with some of the more special bourbon creams, but lacked the ingredients, willpower, ingredients, time, sweat and swearing to hand. Actually, no, I have enough of the swearing in stock, but despite TV chefs that’s not enough to create food on its own. But I mentioned this on Twitter this afternoon, and a friend asked about the recipe, so I thought – why not share it? That’s how I got it. I briefly considered a Twitter thread, but decided that if I were attempting to follow a recipe on a Twitter thread I would rapidly become frustrated and ask, ‘Why didn’t the silly sod just put it in a blog post?’

I very rarely cook from recipes, which is probably one of the reasons I don’t bake, because I’m aware enough that bodging something up with meat and veg to taste is qualitatively different from shoving ingredients in the oven and trusting to magic. But five years ago, in one of the periodic national baking fervours, I slightly regretted not being a baker but lacked the confidence to start. One kindly friend asked what sort of biscuits I liked, and sent me a fairly simple bourbons recipe. I’ve not baked it much, and I’ve not baked anything else, but these biscuits suited me.

A friend sent me this recipe, having found it somewhere else, so I can take no credit even on their behalf. That means this is not a story of a brilliant invention inspired by a life-changing event or an old family secret. There are no more anecdotes to get in the way of getting to the recipe. The only things of mine are a few notes you’ll see as you go along, because although whoever the recipe’s original author was wrote fairly straightforward instructions, I am the definition of an inexperienced baker and made several mistakes and discoveries which I hope will be useful to share.

Now to the useful bits!


Alex Note: This makes 20ish biscuits, depending on your rolling and slicing.

Top tips – I found that the whole process always took at least twice as long as I expected, and that the biscuits had to be rolled thinner and cut narrower than I expected. Every time. You will also find that your kitchen and potentially entire home will be covered in a delicious but choking patina of icing sugar.


Ingredients For the Bourbon Biscuits


Ingredients For the Bourbon [Butter-]Cream

Preparing and Baking the Bourbon Biscuits

Cream together the butter and the muscovado and caster sugars for 2-3 minutes, until pale and fluffy.

Beat in the golden syrup.

Then sift in the flour, cocoa, bicarbonate of soda and salt, and beat together.

Add the milk, a little at a time, to make a smooth dough.

Place the dough between two large pieces of clingfilm and roll out to a large rectangle, 3-4mm thick.

Alex Note: I recommend closer to 6cm by 2cm for the ‘proper Bourbon’ proportions. They expand, so find your preference by trial and error.

If you’re after neat, ideal bourbons with a biscuit snap, always roll them thinner and cut them narrower than you expect, then put them on the trays with plenty of space about them.

If you prefer a thicker, less shaped, more cookie style of biscuit, roll them slightly thicker and cut them slightly wider (or prepare with a little more bicarb), and don’t worry about them rising into one another.

Then transfer to the baking trays.

Use a wooden skewer to mark out rows of dots along the length of each biscuit.

Alex Note: This is of course only for presentation. But just so you know, the ‘proper Bourbon’ is two neat rows of five dots. If you’ve cut them shorter, the five will cram together and merge on baking, so do four dots and no-one will notice even if you’re aiming for super-regular bourbon creams.

I used the round base of the wooden skewer, as that makes nice regular dots like Lego, which keeps the shape much better than a sharp pin-prick.

Also sprinkle sugar – bigger crystals look better – lightly across the top, as the embedded crystals look impressive when cooked in.

If, on the other hand, you’re just going to eat them rather than them show them, don’t bother as it’s a bit of a faff. And – full disclosure – I’ve never bothered carving “BOURBON” into the surface of each one, so all my biscuits will have been failed as proper Bourbons.

Bake for 10 minutes, then remove from the oven.

Leave to cool on the tray for five minutes.

Alex Note: I recommend carefully sliding them – still on the parchment so as not to disturb them – onto a cooler surface, as the tray will still be very hot and if you start moving them onto the wire rack while they’re still too warm and soft they often tear apart.

Then transfer to a wire rack to cool completely.

Cream the butter for two minutes until fluffy.

Sift in the icing sugar and cocoa and beat slowly until combined.

Add the vanilla extract and beat until smooth.


The Miraculous Alchemy that is the Complete Bourbon Cream Biscuit

Spoon or pipe a thick line of buttercream down the middle of one biscuit.

Alex Note: Or just spread a load with a knife. I’m no good at neat thick lines, so this gives more control.

The quantities specified make quite a bit of buttercream, so you can be quite generous with it. Sometimes I’ve worried I might run out and been left with lots of buttercream at the end. Re-opening the biscuits to add more tends to break them (whatever filling is in there will be quite an effective adhesive once set), so what to do if you have too much spare buttercream and someone might walk into the kitchen and catch you just eating it by the spoonful?

My recommendation is to roll the spare buttercream into little balls, roll your balls in the muscovado sugar to cover them lightly, and tell everyone you absolutely meant to make little truffles too and it was in no way a mistake.

Sandwich together with a second biscuit.

Repeat until all the biscuits are filled.

The biscuits will keep in an airtight container for 3-4 days.

Alex Note: Yeah, right. Only if you padlock it and give someone else the key.

I hope you enjoy the biscuits, and if you wish to know where to send me some in an airtight container for express delivery within 2-3 days, please use the email address in the sidebar.