Some days I’m just in the mood for James Bond. A couple of weeks ago, I marked the Double Seven (7th July) with a More! More! Moore! The Spy Who Loved Me – For Your Eyes Only double bill review. But back in April, I Tweeted along with the 007 25-Day Challenge in the absence of the delayed #Bond25, picking my favourite of many different aspects of the Bond films. Today I’m writing an article that’s not going to be a cheering read. So for this morning’s displacement activity, I’ve re-edited all 25 Bond Favourites into one punchy collection. And they won’t all be Goldfinger… 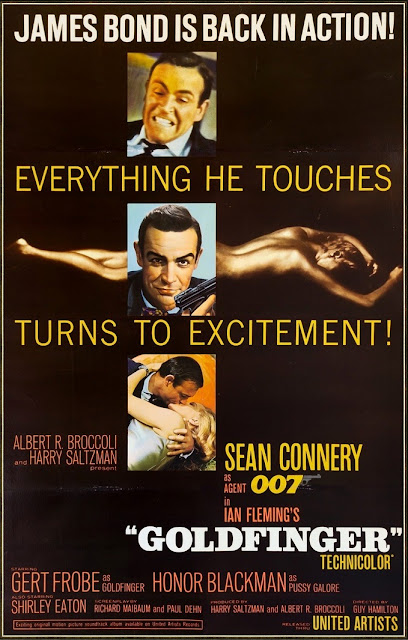 Goldfinger film poster – Sean Connery as Agent 007 in Ian Fleming’s Goldfinger, starring Gert Fröbe as Goldfinger and Honor Blackman as Pussy Galore (pictures of Connery and the golden girl):
“JAMES BOND IS BACK IN ACTION!
EVERYTHING HE TOUCHES
TURNS TO EXCITEMENT!”

If I’m watching him in the right film (or making the right innuendo), it’s Connery, Moore or Craig at the time.
Brain and lower brain say Craig, but ingrained instinct remains Sean Connery.

Goldfinger
Refines and perfects, fabulously quotable, looks and sounds fantastic.
Bond himself is more cool than effective, but so what?

I wanted to pick something less obvious, but my runners-up would be Casino Royale and You Only Live Twice…
I bloody love Octopussy, too, though.

Pussy Galore
These won’t all be Goldfinger, but the magnificent Honor Blackman played still the greatest ever Bond woman (incredibly effective, but even more cool).
She was the only person in history able to say

“My name is Pussy Galore”

with a straight face.

This might be the hardest: I love villains.
Anti-Bonds Grant, Trevelyan, Silva are great, but it’s got to be a diabolical mastermind for me.
A Blofeld? Drax, Orlov, Klebb? No?

These won’t all be Goldfinger, but I enjoy him so much.


Day 5 – Favourite ‘Henchman’ (not all Henches are men)

Hmm.
Oddjob or Onatopp? Volpe or Jaws? Even Mr Wint & Mr Kidd, though they’re very, very wrong.
Baron Samedi would be in the running, but he’s a loa just henching for a laugh (but what a laugh).

Donald Pleasence
So memorable, so imitable, so quotable.

I enjoy the voice / hand / cat / table presence; Charles Gray is a great Bond villain (rather than Blofeld); but no-one else glares or enunciates “annihilate” like Pleasence. 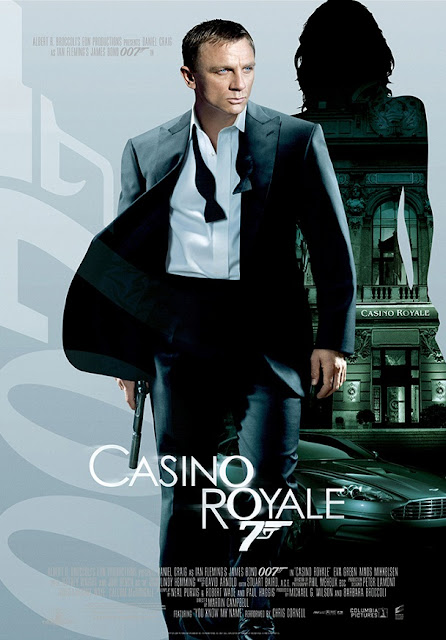 Judi Dench.
Bernard Lee’s instantly perfect. No-one could beat him until, wow. She arrives.
Then extra depth and even more acid with Craig.


“In the old days, if an agent did something that embarrassing he’d have the good sense to defect! Christ, I miss the Cold War.”

Lois Maxwell.
Perfect chemistry first time, then keeps sight of the character through more inconsistencies and indignities than anyone else in Bond.

Though favourite actor who happens to have played the role is Pamela Salem, because Pamela Salem.

Jeffrey Wright.
He’s just got what Sir Humphrey would call ‘bottom’.
(Though I do have a soft spot for David Hedison’s snark.) 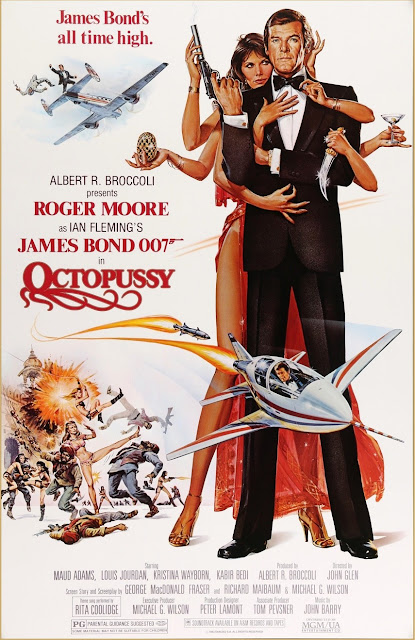 Octopussy film poster – Roger Moore with gun, dinner jacket and very long legs. So does Octopussy herself, standing behind him, but she has a lot more arms (holding a Fabergé Egg, a dagger, a champagne glass, and, mostly, Bond). With guest action sequence paintings including Bond in a miniature plane, Bond kicking a hench out of a larger plane, and women kicking more henches.
“James Bond’s all time high.”

That car in Skyfall!
…M’s racing green Jaguar XF, of course.
Oh, spaceships, Oh, that interesting car of yours, the toys.
But we saw Skyfall on opening night, our anniversary, and were the only people in the cinema who cheered when M’s car appeared – just for us.
One week earlier, Richard had picked up Redvers, his new racing green Jaguar XF.
My favourite.

*Technically it could take you up to whichever number is individually appropriate, but numbered as issued because Q is very serious about these things being properly catalogued.

Goldfinger.
Shocking not to.

So many fantastic runners-up, though. Goldeneye, You Only Live Twice, Octopussy, The Spy Who Loved Me, Live and Let Die, the original headf— of From Russia With Love, The World Is Not Enough (despite warping our local geography)…

How could it be anything but the ur-titles, Goldfinger…?
…But it isn’t.

Casino Royale’s title sequence blew me away.
It’s incredibly stylish and thrilling – Bond’s “007 status confirmed” still makes the hairs on my neck stand up.
Then Bond basically materialises as a Shayde!

Goldfinger!
No bluff this time. As The Spy Who Loved Me Bond composer Marvin Hamlisch put it,

I love so many terrific Bond themes to bits, but I can’t pick a ‘runner-up’ when they’re all too far behind Dame Shirley to see in the DB5 rear view.

Blunt Instrument (David Arnold, Casino Royale)
The films have many of my most-loved scores (not least a John Barry ‘What a magnificent vista’), but when 007’s arrival in Nassau accelerates from tense swagger to driving brass, it’s concentrated essence of Bond.

Too many to consider, so closed my eyes, and:
The twins chase 009 (Octopussy)
Gripping tension, superb action, fabulous score. Like The Avengers doing John le Carré, but so Bond.
007 disarming the bomb later in the same film, too. 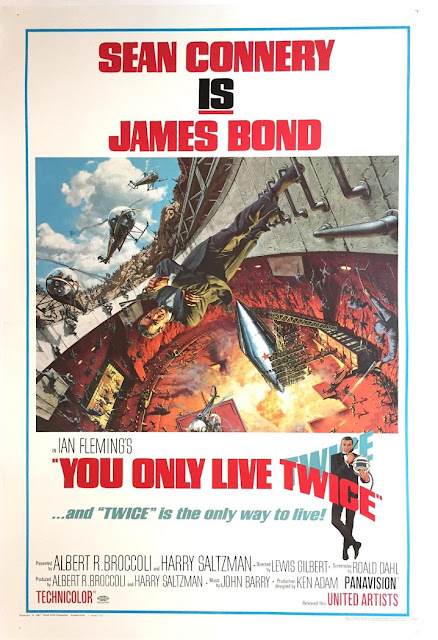 You Only Live Twice film poster – Volcano base! Helicopters! Rocket! Ninjas! Gravity-defying Sean Connery with gun and dinner jacket!
“SEAN CONNERY IS JAMES BOND
IN IAN FLEMING’S ‘YOU ONLY LIVE TWICE’
…AND ‘TWICE’ IS THE ONLY WAY TO LIVE!”

The volcano! (KEN ADAM, You Only Live Twice)
Size isn’t everything. But…

Runners-up: Goldfinger’s viewing room and General Orlov’s Kremlin viewing table.
I love the subtext that even the cinema you’re in is more thrilling in Bond’s world!

Daniel Craig’s blue trunks (Casino Royale)
The easy choice, because there are too many fabulously villainous Nehru jackets in too many films to sort through and pick just one of them. Unlike the trunks, I’d wear it, though.

Isle of Dogs, London (The World Is Not Enough)
…Despite scrambling our neighbourhood, it’s ours.

Or, for perhaps most magnificent of all the John Barry ‘What a magnificent vistas’:
The Swiss Alps (On Her Majesty’s Secret Service)

Baron Samedi (Live and Let Die)
Because he keeps coming back!

Runners-up Alec Trevelyan, for the ludicrous overkill, and Elliot Carver, partly for the quip but mainly for M’s smirk as she writes the cover story.

Connery positively mastered the “Shocking” death-quip, but Moore is more is most for the innuendo.
And the death-quip.

Makes me laugh most, but he loses that quip.

“What makes you think this is my first time?”

“Just a slight stiffness coming on… in the shoulder.”
“—Bezants.”

Confession: I read them all in my teens, but recoiled from the second and stopped when I tried a re-read after Casino Royale in 2006. So I’m not sure which Ian Fleming novel I’d go for (just which I wouldn’t)…

Problematic as hell, too, but I loved the thrilling ride of John Gardner’s For Special Services. I should write about that one sometime.


Day 25 – Kindest Member(s) of the Fanbase That You Follow

You know his name: Dome, @MillenniumDome

Plus the lovely @BrandyBongos, and @The_Cybermatt for bringing this 25 to my attention.

Is it over already? That sped by! 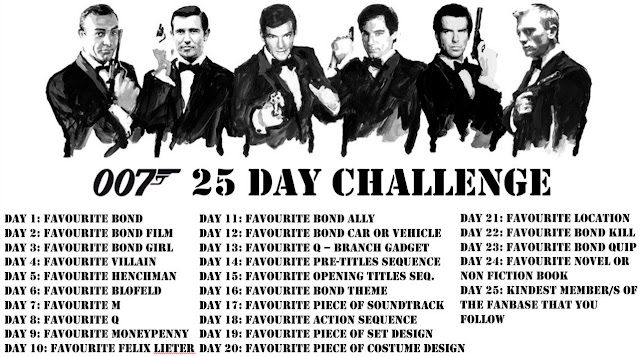 This is the fifth of what might be a series of Fragments – not-quite-finished, not-quite-polished, from ideas I’ve written up over time and maybe I’ll share some of them anyway. If you’d like more, please let me know, and if you’d like to help, please ask me, ‘Have you at some point written something intriguing about Story / Series X, and could you find it, consider it and post it?’ You might suggest one that I can (TS;RM [Too Short; Read More]? Here). This one’s for Millennium.