The Avengers – The Lost Episodes: The Springers #Fragments


Julian Wadham is John Steed. Anthony Howell is Dr Keel. It’s not The Avengers as you know it. The Springers was broadcast on May 13th 1961 and no longer exists to watch – but as an audio drama, it’s now very satisfying. To break a prison-breaking gang, one Avenger goes undercover deadly seriously while the other goes undercover outrageously. You can guess which. And you can see (or hear) just how The Avengers was on its way…

“The Avengers is about a man in a bowler hat and a woman who flings men over her shoulders.”

…said Patrick Macnee, John Steed. Except that right at the start, it took Mr Macnee a little while to find his bowler, and the lead was another man – Ian Hendry as Dr David Keel. Steed is a shady arm’s-length government agent. Keel is a doctor whose fiancée was murdered by a drugs gang, and who joined up with Steed to avenge her. Together, they fight increasingly weird crime. Early publicity photos, before they’d got the hang of the weirdness, sell the show as mean, moody and chain smoking. This probably didn’t last long, but it’s hard to tell; only three and a third of the first year’s twenty-six episodes survive. For the second year, Ian Hendry leaves, Honor Blackman arrives and television gains a woman lead like no-one ever before, so it’s easy to forget the originals. But now Big Finish have completely remade the first season as audio dramas, so I was able to find out what I was missing: adapted by John Dorney, The Springers opens The Avengers – The Lost Episodes Volume 3), and this is what I thought of it… 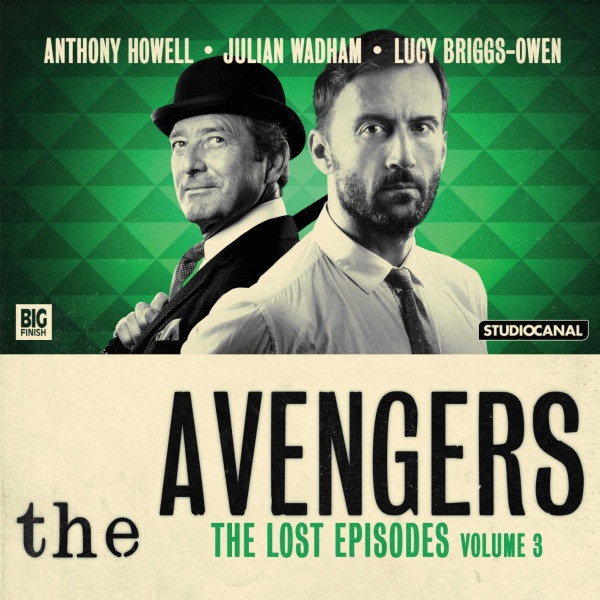 The Avengers – The Lost Episodes Volume 3: Anthony Howell intense as Dr Keel; Julian Wadham amused over his shoulder as Steed (with a brolly over his own shoulder to go with his bowler)

“If you are going to handcuff me to a chair, is it too much to ask that it’s a comfortable one? These wicker seats are murder on the back.”

Seeing The Avengers When Hearing The Lost Episodes

You know those perception trick pictures, where some people see a vase and others two faces? I’d always imagined The Avengers’ first year as a completely different show. Gritty, macho, and rather mundane (at least by comparison to what came after). Protection rackets, vice rings, drug deals? All a bit grubby. And sometimes it is. Even on audio, the publicity photos didn’t lie: this story is wreathed in smoke. Several of these Big Finish versions have featured smoking, but here it’s everywhere – from snout inside the nick, to Steed’s fictitious seaman’s pipe being a plot point, to a packet of cigarettes for ‘Dr Fenton’ (in truth Dr Keel) now he’s out, but still locked up and gasping. And yet, the more of Big Finish Lost Episodes I hear, the more I glimpse The Avengers as it will be instead. Patrick Macnee was always the constant through the series on TV, and Julian Wadham is Steed, too. Slightly dull plots are enlivened by sparkling dialogue and suddenly offbeat characters like, say, an undertaker-taxidermist introduced when all you need is anyone with a phone. Some stories leap into technicolour as you listen: Ashes of Roses with its gossip, single entendres and Steed going way beyond louche; Kill the King’s intricate assassination plot and very Avengers creations; most of all, Dead of Winter. I gasped hearing that one – opening on frozen beef, it accelerates into a plot that had it been done at the height of colour Mrs Peel, you’d say, ‘Well, that was pretty ambitious to get away with.’

The Springers is right on the borderline here: the picture keeps changing shape in my head. Serious criminals are being spring from prison, and Dr Keel is put inside as a ringer for crooked Dr Fenton, to be sent down the escape line. The cells are quite gritty, but this end is mostly a bit pedestrian (no kidding). You can sort of see the seeds of Escape In Time (one of the most fabulous Avengers of all), but the actual escape plan isn’t all that exciting or interesting despite Dan Starkey’s One-Ten trying to make it seem important – and does the same screw ‘get clobbered’ every time? Or are they all on the take? One of several shoes that doesn’t drop (like the real Fenton never turning up, an idea followed through later with Mrs Gale in Intercrime).

Then half-way through it does something many later Avengers will (The Hidden Tiger springs to mind) and, having established guest characters and setting, abruptly drops them all for a complete change of faces, places and pace. It’s well-balanced for both the leads – focusing on Keel early on, then having much more fun with more Steed. The plot springs from vicious crooks and Keel threatening each other in their cell to Steed not taking remotely seriously his attempt to infiltrate the Belport College for Young Ladies with a suddenly striking pre-echo of The Avengers to come. 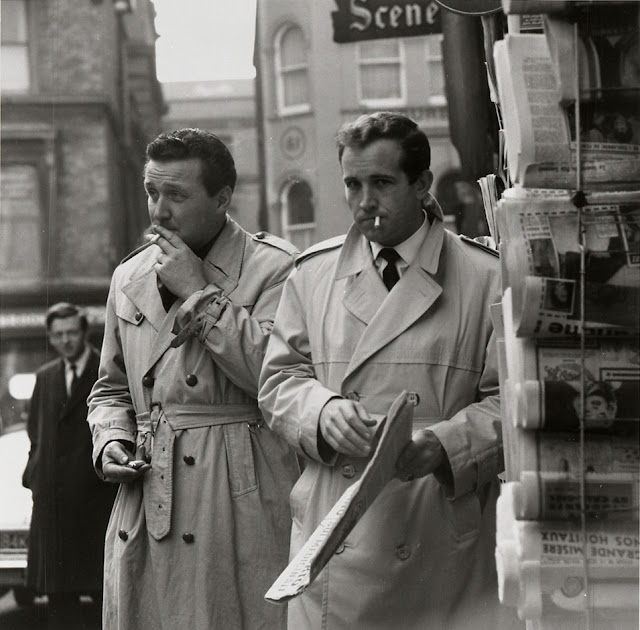 I absolutely love Julian Wadham’s John Steed. I never thought anyone else could be the character, but he won me over in his very first episode. This is absolutely the same person as Patrick Macnee, and yet definitively his own take, too, which is remarkably hard to do. Suave (you might say louche), witty, slightly harder yet rather naughty, he’s a charismatic star lead. Anthony Howell’s Dr Keel has a very different approach, but is just as successful. I’m not sure whether Keel is a harder or an easier role? Steed gets all the best lines but has over a decade of fabulous Mr Macnee to be measured against; Keel is less showy but with Ian Hendry’s part much less well-known, there’s more of an opportunity to make it your own. And unlike Wadham, Howell seems to have made a deliberate choice to do that with an interpretation that’s little like the screen version. Keel has a lot in common with Cathy Gale, especially – unsurprising, given that several of her early scripts were initially written for him and the production team made the magnificent decision not to write them down to a ‘woman’s role – something of her rectitude; Steed is playful and mischievous, but the only rule Cathy breaks is gender. As scripted, Keel is moral to the point of priggish, evolves camaraderie with Steed but doesn’t quite trust him and is rigid where Steed’s mercurial. From what we can see, Hendry plays against the lines with an unexpectedly relaxed performance shot with occasional bursts of anger. Howell leans into the lines instead, not just upright but uptight, intense, even obsessive. He relaxes a bit when doctoring, but with this Keel, despite pangs that he may not be being entirely ethical and resentment that Steed enjoys it, there’s always a kernel at the core of his playing that never lets go of, ‘Bastards like these killed the woman I love’, and he’s driven to keep Avenging her.

There’s a lovely moment for both of them where an exceedingly grumpy convict Keel is called to the prison governor’s office, only to find Steed lounging there swapping old school tie stories. When the doctor snipes to Steed that it’s all right for him because he’s never been inside, he’s airily contradicted and, audibly shocked, tells Steed that one day they’ll have to tell each other about their pasts.

If you think of this as an Avengers story from the point of view of the future series, the prison escapes and the crooks involved in them seem very small-time. But from the point of view of Dr Keel’s Avenging, it really clicks into place. Fenton isn’t just a doctor gone wrong, appealing to Keel’s moral sense, but a drug dealer – which sparked the outrage that set Keel on his mission to begin with. Though he’s given much more to do in the first half, Keel’s most electric moment here is close to the end. Having gone through the pipeline, he’s kept locked up again while the Springers wait to verify his identity: when the doctor channels his actual pissed-off-ness with the situation into naturalistically grabbing a gun and threatening the escape-enablers who’ve become his second-jailers, he gains a very dangerous edge.

Steed, on the other hand, is at his best with a comedy scene, a risk that doesn’t quite come off, and an unexpected woman.

It’s not full-on Avengerland camp, but when Steed arrives at a College For Young Ladies, I held my breath at just how awkwardly 1961 this was going to be only to get something much funnier. Thank goodness! It’s between terms, so rather than perving over ‘kinky’ schoolgirls all but one of the young ladies are out of season (a bit at Matron, inevitably) and the episode’s real eye-opener – while Keel’s banged up, Steed’s brought along a young woman agent for the first time. Melanie gets less agency than I’d like (she seems to enter without introduction and leave without sendoff), but it’s a pretty good part raised to a vivid guest star by Miranda Raison, and her proto-Tara is very much a sign of things to come. She even gets champagne. But, best of all, Steed turns up as a Navy man, hilariously overplaying his cover story of needing somewhere to look after his ‘daughter’ while he’s away, like putting his hound into kennels. Then he introduces himself as “Commander Kennelworthy” and I laughed more than was strictly decent. That’s very Steed. So, later, is his dialogue when tied up, baiting Neame first as “diabolically clever” then taunting him for being a third-rate opponent, trying any angle to get his captor off-guard much as you picture him physically wriggling while he does it.


This is the second of what might be a series of Fragments – not-quite-finished, not-quite-polished (I polished it a bit, but the end dangles), from ideas I’ve written up over time and maybe I’ll share some of them anyway. If you’d like more, please let me know, and if you’d like to help, please ask me, ‘Have you at some point written something intriguing about Story / Series X, and could you post it?’ You might pick one that I can (TS;RM [Too Short; Read More]? Here).