Sometimes you have to take your fun where you can. Eagle-eyed viewers will have noticed I’ve not blogged much in recent weeks; I’ve been rather more ill than usual and, just as I seemed to be getting over it, was re-flattened yesterday by something nasty, this time with extra helpings of guilt for giving it to my firmer-constitutioned beloved too. So when we struggled over to ASDA to dance through enough different aisles to pick up sufficient paracetamol so as not to have to go out again for a week (adults now not being trusted to be ill without lashings of exercise, by law), suspicious sausages made us smile. 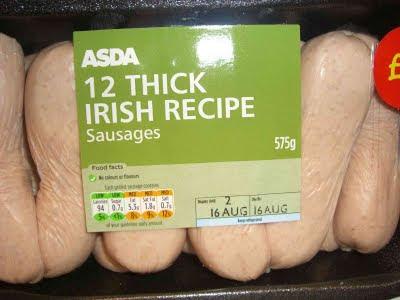 Well, made me smile. Richard just rolled his eyes. And the worst of it is, they’re not even very good bangers. Cheap and largely tasteless. On the other hand, their Extra Special Pork and Apple and their Pork, Parma Ham, Garlic and Red Wine sausages are excellent, and the sweet chilli ones aren't bad either.

I’ve just woken after a broken and fevered sleep which took me a good hour to stop coughing my guts out and settle into, and feel like some healthy, reviving bangers. And chocolate. Obviously.

Have also just had an entertaining text from a friend who, switching on his mobile on holiday, discovered fifty e-mail messages from Lib Dem bloggers. Apparently there may have been some exciting new round-robin service while I’ve been in my pit for the past few weeks, and I may have missed my chance to sign up to unlimited Lib Dem spam. I feel so deprived!

Comments:
Turns out the email address for you I had on record was old and they bounced. All I can say is lucky you. (That's with the emails and not the illness).

Sorry for the gentle piss-take (I should have realised it was you and been kinder). Have now read a few other posts about it all...

Thanks for the luck ;-) Best e-mail to get me on is the one under the 'Contact Alex' at the side.