Why Daniel Radcliffe Is A Liberal

It’s not often you get posters stuck all over the place putting the clearest of Liberal messages. Still less, when it’s an advert for a shop and a big-budget movie. Yet that’s exactly what this Daniel Radcliffe poster (advertising HMV and Harry Potter) did. After publishing the London Mayoral hopefuls’ answers to ‘What the Liberal Democrats stand for’ on Friday and with today Harry Potter’s birthday (a week after Mr Radcliffe’s), this poster sprang to mind – with its admirable quotation chosen by Mr Radcliffe as his inspiration and as blatant a statement I’ve ever seen that ‘I’m a Liberal!’ 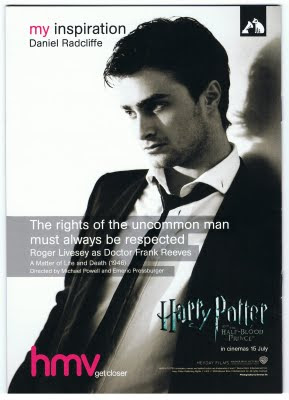 Daniel Radcliffe Is A Liberal

You may remember Daniel Radcliffe backing the Liberal Democrats in the election last year. Unlike some celebrity backers – who you may or may not consider spineless fairweather friends who threw their toys out of the pram at the first opportunity – I believe that Mr Radcliffe is still a Lib Dem supporter. Whether I’m right about that or not, it’s not difficult to see why he was drawn to the Lib Dems, and it wasn’t a single issue: I can’t think imagine anyone but an instinctive, conviction Liberal picking that one line as their inspiration. Whatever his party, there’s no doubt of his philosophy.

And, really, have you seen some of the other lines famous actors and musicians have come up with? Walk into your local HMV (if there still is one; sorry, they’ve gone a bit downhill from putting up those posters in July 2009 to July 2011) and wince at some of the choices other people made.

“The rights of the uncommon man must always be respected,”

a line defending someone who sticks out a bit from Roger Livesey’s character Dr Frank Reeves in Powell and Pressburger’s 1946 classic A Matter of Life and Death shows that, as well as being an instinctive Liberal, Daniel Radcliffe also has excellent taste (not seen it? Go on, do).

So yay for Mr Radcliffe for picking a quote that meant something to him and probably had tabloids fuming. And yay for him, too, for putting his money where his mouth is and not just supporting the Lib Dems but standing up for the rights of the uncommon man and woman through the Trevor Project. If anything, he seems more consistently and intelligently Liberal than the messages of the part and films for which he’s famous – not qualities with which most actors and massive film franchises are usually associated.

And finally, hurrah for his being quite comfortable taking his clothes off. Is it just for the roles, or is he on course to become a celebrity nudist? Hurrah, anyway (and for getting quite handsome with it. If he’s still doing it in a decade or two’s time when he’s filled out a bit, I might quite fancy him myself). In the meantime, well done for helping cast a Liberal spell over the young folks (whether they fancy the Lib Dems or not).


Update: I’ve been reminded of this on the politics of Harry Potter, too.

Comments:
I seem to recall that he no longer supports the Lib Dems because of their U turn on tuition fees.
In fact a Google Search shows this to be the case.
http://www.atvtoday.co.uk/index.php?option=com_content&view=article&id=376:daniel-radcliffe-regrets-lib-dem-backing&catid=1:tv-media&Itemid=3

My main point was about his philosophy - which I notice you don't engage with at all.

However, as to his party loyalties or not, I was aware of that reported story, hence my qualifications. The reason I didn't mention it is that I don't share your remarkable faith in a story that involves an anonymous source and the Daily Hate Mail. I'd rather trust the entrails of a goat. You snidely use the words "fact" and "shows this to be the case". None of those words are true, and I'm amazed that after all the recent revelations about the press that someone styling themselves a "Left Liberal" should still believe every word from Britain's nastiest newspaper (and probably the Lib Dems' most vicious opponent in the media, which is saying a lot).

As my caveats implied, though, it's possible that he no longer supports the party - even though, if you've read the (true? Made up? Who can say) quote you linked to, even that doesn't actually say he's dropped the Lib Dems, just that he's unhappy (which wouldn't put him out of line with a fair few members) - but there's no reliable evidence to that effect (such as, for example, his saying so), and in any case, whether or not he's a Liberal Democrat, the man's clearly a Liberal. Which brings me back to the poster that was the point of this.