Counting down towards the fiftieth birthday of Doctor Who with Fifty great scenes… This one’s the newest entry in the Fifty and, improbably, from the first in the current TV season. That’s because Doctor Who returned last night for the second half of its thirty-third season (having skipped a few years along the way). It was broadcast last Autumn, and though that was the first time since 2005 that a new season hadn’t premiered at Easter, looking back at it now, what could be more festive than… 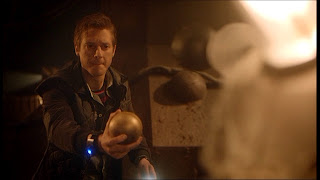 Doctor Who 50 – Asylum of the Daleks
OK, I’ll confess: Doctor Who may have been forced to skip a few years of its fifty when it came to TV, but with less of an excuse I’ve skipped a few of my Fifty to get to this one – and while most will be renumbered, I’d already published the “Next Time…” for Number 39, so that’s a piece of rescheduling that can’t hide. It’ll be along soon. But meanwhile, a happy Easter to all of you at home!

The Doctor (Matt Smith) has been lured and captured by the Daleks, who are using human corpses as part of their evil scheme. To save the Daleks – perhaps, though read Richard’s review on Millennium’s Fluffy Diary for an idea of what they might really be after – the Doctor and his companions are sent down to the planet where the Daleks seal away their mad (madder). Strange things happen: the dead rise; Carmen plays; a young woman called Oswin makes soufflés, but – spoilers – it’s obvious by the end of the episode that she’s not going to be significant. While the Doctor and Amy wander the planet’s surface, Rory has fallen right through to the decaying chambers below, where the Daleks’ unloved ones sleep the sleep of the rusted…

Rory’s unnerved wandering the dim-lit deep, Daleks all around him. Many Daleks. All, we hear, deranged. Most damaged – burned, battered, balls missing. Daleks of all designs and varieties, ancient Skaro to Special Weapons Abomination to bronze-studded Russell T Dalek, almost to a mutant more popular than certain later models a celebration of the best of Doctor Who shouldn’t mention. But his fear mixes with fascination and a nurse’s care for the injured – which leads him to examine one with his pen-torch, as if testing for common eye problems. The Dalek’s eye lights up. That’s a problem. It starts, stutteringly, to speak.

Rory finds bronze spheres in the dust. The Dalek’s missing some of its globes. He picks one up and offers it.

The others’ eyes are beginning to glow, too. They’re starting to fidget, as they come out of their long sleep. Rory thinks they want a fry-up for breakfast. What do you think, boys and girls?

It’s that word again. The first energy blast comes close to frying Rory. Then his legs stir, as fast as they can carry him.


Bonus Great Doctor Who Quotation – Revelation of the Daleks

The Doctor (Colin Baker) has been lured and captured by… The Daleks’ creator Davros (Terry Molloy), this time, but also exploiting human corpses, and even more thoroughly, in another jolly food-related moment. It’s the ’80s – first broadcast 28 years ago last night – so Davros, short of a Dalek army for a while, has set up on his own in a very profitable business: his genius for science offers the promise of making death just a temporary condition for the galaxy’s rich “resting ones” flocking to his graveyard planet of Necros. This ferocious black comedy isn’t just writer Eric Saward being the Robert Holmes Tribute Band, but Davros styling himself after the Doctor – “the Great Healer”, in fact, borrowing from his enemy but unable not to make himself just that bit bigger (and there’ll be another of those in the missing Number 39 when that turns up). But, being the ’80s, there’s not much altruism in this promise of resurrection. The Great Healer charges a very high price while the hopeful dead await medical breakthroughs in their frozen tombs, but that’s not the half of it. The families are happier spending their inheritances than having them returned to life and control, so it’s in their interests for them to stay on ice, while Davros has his own plans for the loved ones – especially the Yuppies. What are the two popular ideas of immortality? Being born again, or living on through those you leave behind? Be careful what you wish for…

“Do you never do anything but kill?”
“There you are mistaken, Doctor. I am known as ‘the Great Healer’. A somewhat flippant title, perhaps – but not without foundation. I have conquered the diseases that brought their victims here. In every way, I have complied with the wishes of those who came in anticipation of one day being returned to life.”
“But never, in their worst nightmares, did any of them expect to come back as Daleks.”
“All the resting ones I have used were people of status. Ambition. They would understand – especially as I have given them the opportunity to become masters of the Universe!”
“With you as their emperor. But what of the lesser intellects? Or will they be left to rot?”
“Ahhh. You should know me better than that, Doctor. I never waste a valuable commodity. The humanoid form makes an excellent concentrated protein. This part of the galaxy is developing quickly. Famine was one of its major problems.”
“You’ve turned them into food?”
“A scheme that has earned me great acclaim!”
“But did you bother to tell anyone they might be eating their own relatives?”
“Certainly not. That would have created what I believe is termed – consumer resistance.”

Colin’s Doctor and Davros make a terrific pairing, and this deliciously horrible bit of dialogue (sponsored by the Soylent Corporation) never fails to make me laugh.


As this one’s jumped ahead, its “Next Time…” would just have been “Happy Easter!” – and it’s once again:

Next Time… Hiding behind… Oh, no, hiding from…