It’s finally come: the official end of the 2010 Parliament, and the official start of the campaign (“Not ’til now?” said Tegan, dismayed). And though you might think Doctor Who is all about the Liberal philosophy and not pounding the streets with Focus leaflets, I’ve found evidence of one of the Doctor’s companions standing for election is just the way Lib Dems do.

By chance, the Doctor Who story starting today on the Horror Channel is Snakedance. And there’s a photo-op from that story that shows exactly what I’m talking about. The Doctor tends to be a bit rough and ready in sorting out the big problems and then leaving before he has to do the clearing-up, but Nyssa, one of his friends from the time, was raised in a tradition of public service and proper tidying up (Cleaning up the Mara’s Mess! After Cleaning up the Melkur’s Mess! A Record of Sweeping, A Promise of More!).

We don’t see the TARDIS leave at the end of Snakedance, but you can bet the Doctor goes and hides in it while Nyssa takes over doing her thing. Or, at least, campaigning to be put in charge in the proper #LibDemsPointing way. 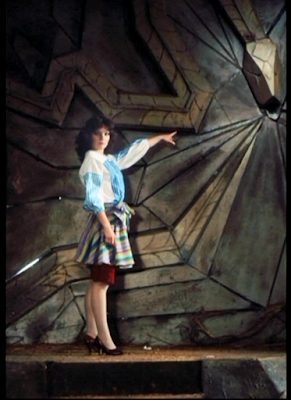 What Have the Federation Ever Done For Us?

Nyssa of Traken [pictured, pointing] is standing for Market Ward, Manussa, and campaigning for a new deal for the Scrampus System.

“The Federation have been in charge round here for five hundred years – today! And what have they done since ridding Manussa of the Mara? Nothing but lounged around fondling suggestive antiques on expenses. Market taxpayers have had enough.

“It’s time for a change. We can start by cleaning up this unsightly graffiti that’s all over Manussa’s ancient monuments.”