The first story in my idiosyncratic fifty-two-week Doctor Who selection… And what a mighty first this story brings! Launching the 1975* season, this stars Tom Baker as the Doctor (and he’s not the only first).

There’s a trail of mysterious break-ins and deaths and only the footprints of a giant robot left behind – what could it be? Well, obviously, yes, but there are more secret weapons and a fascist coup to deal with too. Can the Doctor, Sarah Jane Smith, Harry and the Brigadier stop them? And how much fun will we have watching?

This Monday, November 23rd, will be Doctor Who’s fifty-second anniversary. My celebration is a story every week. You can read what this Doctor Who 52 is all about here. But I’d just read on, then press Play on the DVD. 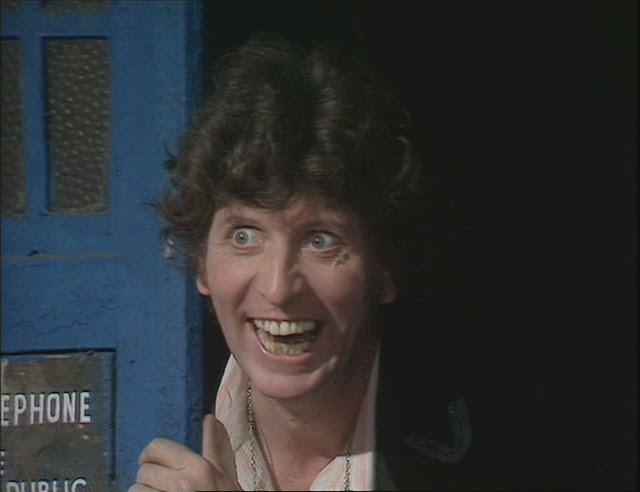 Robot – Tom Baker is the Doctor


“You may be a doctor, but I am the Doctor. The definite article, you might say.”

He grabs the role with astonishing energy, bewildering his friends and simply sweeping his foes before him, not just physically but with a firecracker intelligence, both mind and body in constant motion. No-one has any idea how to deal with him – except Sarah Jane – but he gets away with it all with simply blazing charisma. And he’s already wearing that scarf and that grin. Nothing will ever be the same again.


2 – The Time Tunnel. The most iconic of all Doctors gets the most iconic of all title sequences, perfected by Bernard Lodge into the TARDIS rushing through a fabulous swirl that’s been the inspiration for most of the post-2005 titles. It’s paired with, for me, still the best version of the Doctor Who Theme, now with looping echoes into the episode and cliffhanger scream out of it. 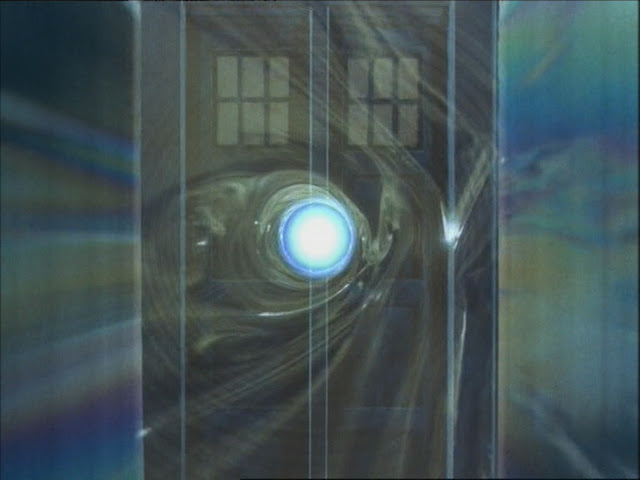 
“There’s no point in being grown up if you can’t be childish sometimes.”

The coda is gorgeous, the Doctor and Sarah Jane (Elisabeth Sladen) making up with each other after the climax, Harry (Ian Marter) endearingly trying to make sense of it all, and finally Brigadier Lethbridge-Stewart (Nicholas Courtney) accepting the inevitable. It’s hard to think of two of the Doctor’s friends more iconic than journalist Sarah Jane Smith, who came back so many years later and starred in her own show, or the Brigadier, who the now liberated Doctor had worked with advising UNIT throughout his time exiled to Earth and whose daughter Kate is a mainstay of the series today. And it’s hard to think of a team that makes me smile so delightedly as the Doctor, Sarah Jane and Harry. Here those three come together as a proper TARDIS crew, with new recruit (though not militarily; a Surgeon-Lieutenant from UNIT and the Navy) Harry Sullivan taken for a ride, the fourth Doctor offering his first jelly baby, and Sarah Jane standing up to the Doctor when he’s gone too far but then, the grown-up of the three, making a deliberate choice to be child-like and fly off into time and space to have what you know are going to be the scariest, and most fun, and most marvellous adventures anyone could ever imagine. I’ve previously written about it as one of my favourite ever scenes in more detail. It’s adorable.


“The trouble with computers, of course, is that they’re very sophisticated idiots. They do exactly what you tell them at amazing speed, even if you order them to kill you. So if you do happen to change your mind, it’s very difficult to stop them obeying the original order! But… not impossible.”

Before my failing health stopped me working, I spent some years as an IT tutor. Hardly a day went by without my at some stage reassuring a student with a version of that line. Usually alluding more to saving before you close than impending Armageddon, though.


5 – Surprising thematic consistency. No, no, wake up at the back! Season Twelve of Doctor Who introduced not just Tom Baker, the time tunnel and Harry Sullivan, but awesome new Script Editor (a similar role to today’s lead writer) Robert Holmes and Producer Philip Hinchcliffe. So some people write this story off as the last produced by Barry Letts, and authored by just-going Script Editor Terrance Dicks. But Holmes clearly had a hand in it too, as Robot introduces the fascinating themes that will dominate the season: scientific survival and rebirth by fascistic elites; shattered worlds (before, during and after); alien / machine logic and intelligence against human instinct, free will and compassion… Which isn’t necessarily found among the humans-by-birth. And spot-your-own 1930s horror film motifs.


6 – The Robot. It looks fantastic (at least until Part Four). Probably still my favourite robot design in all of Doctor Who, a towering, powerful but still stylish creation accompanied by a low, grating ‘machine’ sound that makes you think the robot’s like a fork-lift truck. But its character is compelling, too – not just Michael Kilgarriff’s acting, but a creature that is often more human than its masters (the novelisation emphasises its tenderness in unexpected moments). I took that to heart at a very young age; it may even have started me off on empathising with the ‘other’, and is probably at the root of my always flinching at the Doctor being beastly in other stories to patently sentient AIs, especially when they’re having existential crises. 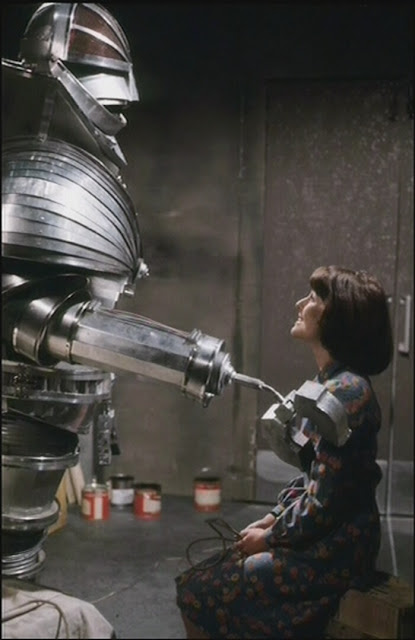 Sarah Jane and the Robot

7 – Sarah Jane Smith is magnificent. With a new Doctor, a new companion and so much else to compete with, this is still one of her strongest stories. She’s the intrepid reporter who tracks down the mystery; she’s brave and saves the world facing down the villain when even the Brigadier can’t; then her empathy and compassion even for the unforgivable shines through. And Elisabeth Sladen’s wonderful performance ties all of her character together. She’s a big influence on companions after 2005 in being the Doctor’s heart – but also in doing what has to be done, not ruthlessly, but showing determination when no-one else will.


8 – There’s a brilliant way round the Three Laws of Robotics. Brilliant, but fatal. Reminiscent of all so-called utopian societies, in which the individual is disposable for the greater good (even if that comes to mean most individuals in the world). Terrance Dicks wrote this ten years before Isaac Asimov introduced his ‘Zeroth Law’, and that’s not the end of the cleverness in his writing: watch carefully, and you’ll find that the Robot, Russian doll-like, is only the first of three nested ‘ultimate weapons’… Yes, this is ‘Doctor Who – Age of Ultron’.

Fascist leader Hilda Winters (Patricia Maynard) is a great villain, calculating in private, demagogue in public, but this infamous sentence from Terrance Dicks’ novelisation underlines how easy it is to be authoritarian just so long as it’s what you’re sure is for everyone’s good… The Brigadier’s retort there to Sarah Jane’s wish to bang up all the baddies because we know they’re baddies is that Britain’s not a military dictatorship. Which on balance, the story suggests, is a good thing.

It’s difficult to work out how much I was instinctively a Liberal and liked Doctor Who because it was the ‘odd one out’ show, and how much I liked Doctor Who and so took its lessons to heart. But though I think of certain other stories as more obvious influences on my politics, there are definite seeds here. Free will versus dictatorship; empathy with the different; Sarah Jane’s first reaction to power being that it might be misused, her second to ask questions, her third compassion; green energy being a really good thing but enforcing it by authoritarianism and viewing people as disposable is a really bad thing. A green Liberal in the making, aged three, thanks to that most Doctor Who of simple homilies, that “the end never justifies the means.” Aged three? Well, yes. The moral here wasn’t the only influence this story had on me… 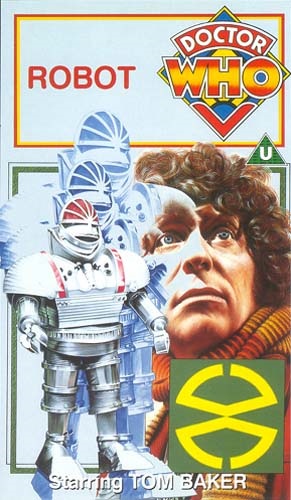 What Else Should I Tell You About Robot?

This isn’t just where Tom started. It’s where I started.

Of course I can have two hearts.

Many more stories than you’d expect are someone’s favourite, but every story is someone’s first. This was designed to be a new start (and so was the next one), and when three-year-old me starting watching half-way through Robot, I was hooked.

Thinking critically, it’s a good story, but it’s not the very best. Its liberal heart is in the right place (opposing the far-right place) but its grasp of international politics is a bit shaky. And though as Robot comes into the final episode it builds several climaxes on top of each other, it’s also where a few things fall down a bit, not least the special effects. Gigantically. Even Sarah Jane has her ups and downs there.

So where many fans, if you asked them where to start on Doctor Who, would pick an action-packed, fun, familiar-but-different story set in more or less our modern world, one that gives a central role to the woman companion while introducing a new Doctor and a hugely successful era, and has the single-word title “Ro—”… It’s probably true that it wouldn’t be this one unless the fan is me (I love that other one too, by the way, but more on that story later).

But none of that matters to me. Because it was my first. And forty years later, I’m still watching Doctor Who because of it. What better recommendation could there be?

*Technically this started in the last week of 1974, but as it was launching a new season for the New Year and the first Saturday after Christmas was when they did that – and as I didn’t start watching until the second week of January – I always say it’s 1975. Because it belongs there. And, anyway, it’s from 1980.

Usually this will be a simple mark out of ten, the crudest possible metric of how good I think a story is. Some weeks there will be exceptions. 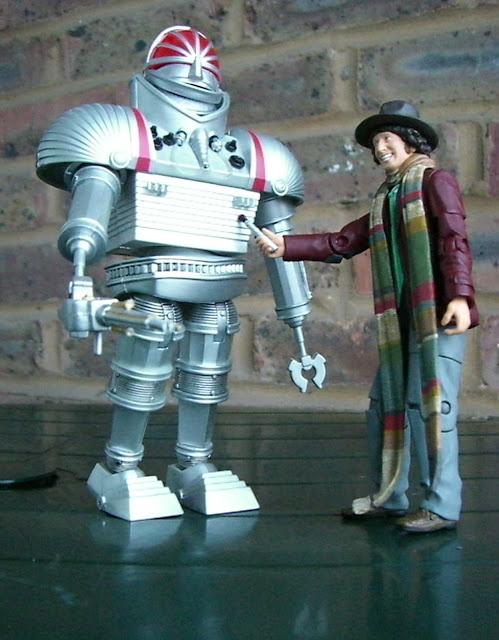 The Doctor and the Robot toys

Everything! I did. But perhaps saying ‘now watch all two-hundred-and-fifty-odd stories before next week’ would be overdoing things.

Then try the whole of Tom Baker as the Doctor? I did. But it did take me the next six years, as they went out on BBC1.

So if you liked Robot, why not try The Ark In Space? Because it was Tom’s second story as the Doctor, and because, though most weeks I’ll probably choose a story that’s quite like the one I’ve just watched, The Ark In Space takes the new but already perfect team of the Doctor, Sarah Jane and Harry away from the comfort of Earth and throws them into stark outer space horror. It’s a brilliant story, it has another of Tom’s best performances and one of his most iconic speeches, it’s a bold statement of where new producer Philip Hinchcliffe and lead writer Robert Holmes were to take the series, and it became a huge influence – probably on the film Alien, certainly on Doctor Who’s return to TV forty years later, with both Russell T Davies and Steven Moffat claiming it as favourites.

But most of all, try The Ark In Space because one of the things I most love about Doctor Who is that, whatever you think of the story you’ve just watched, the next one will probably be completely different. 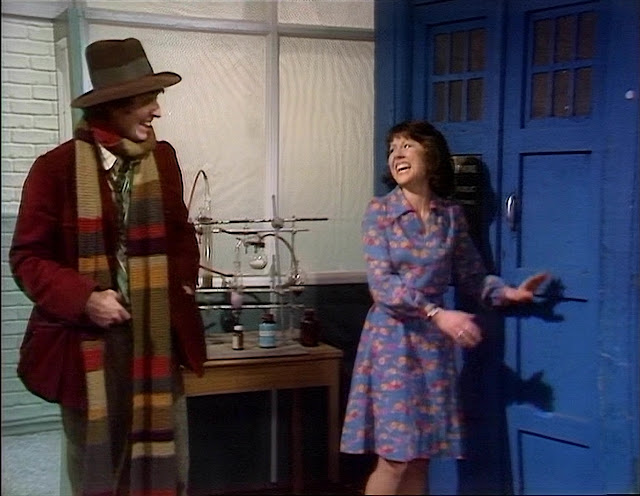 Robot – The Doctor, Sarah Jane and the TARDIS

Meanwhile, On the Other Side…

My beloved husband Richard is watching… Why, look! The Ark In Space.

Always start at the beginning. I have. But Doctor Who has more beginnings than the Doctor has lives…