The Weirdstone of Brisingamen

Tomorrow sees the publication of Boneland, Alan Garner’s second sequel to The Weirdstone of Brisingamen, a novel that puts “long-awaited” into perspective: half a century. Of the many fantasy books I loved as a boy, the Weirdstone perhaps always felt closest to home, and in the last year I’ve found myself rediscovering it – as has our friend Nick, who’s encouraged several of his friends (including author Paul Magrs) to re-read the originals in preparation for tomorrow. He interwove our views last week, including a few of mine, and this is the full stream of consciousness that I sent him. Nick’s is rather a lovely piece – as is his new one returning the favour for our Time’s Champions blog this morning – and Paul Magrs’ thoughts on Atlendor and Durathror’s Capulets and Montagues (or is it Sharks and Jets?) relationship are particularly enlightening. Look out, though; if you’ve not read the Weirdstone, there are spoilers below, even if only about the end itself and not how to get there… 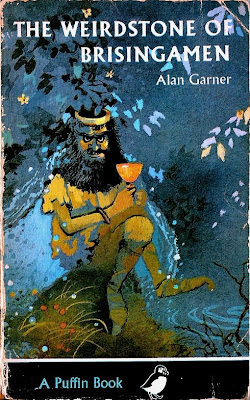 The Weirdstone of Brisingamen

I grew up with several fantasy books – first my Dad reading them to us, then reading them for myself – but I think The Weirdstone of Brisingamen was the one that felt most personal. I was born about ten years after it was written, and raised about ten miles from where it was set, in a town at the top of Cheshire or the bottom of Manchester… So more than any other story I knew, this one seemed to have an immediacy, one that was almost familiar, only just out of reach in space and time. There’s something about a lot of adventure stories that grab you as a child, the feeling that it could happen to you, in a place you know – one of the reasons I have a soft spot for little-loved Doctor Who story The Android Invasion is that it felt, watching it, like the sort of village Mum and Dad might drive us to on a Sunday – but this was different. I think we only actually went to the Edge a few times when I was a child, but knowing that it was there, and real, almost close enough to touch, gave this tale a special magic. So many of the stories I loved, even if they were set in our world, seemed distant from us: the mystic fringes of Wales, Scotland or Cornwall; England always somehow meaning ‘South-East England’ on the page or on TV. But no legend was as powerfully evocative as that of King Arthur (greatest of our four great national myths), and to find that he was buried not at the other end of the country somewhere but in our own North West, now, that was marvellous.

For Richard, who I met in London and fell in love with half my life ago and only then found he’d gone to school not much of a walk from my parents’ and grown up almost on the edge of the Edge, the book is even more powerful. As a boy, he’d lived not ten miles away (close, but beyond the travelling power if not the imagination of a child), close to Lindow, not quite in one of those “mean dwellings” that Cadellin disparages but only just up the road. So if it was special to me, it was literally close to home for him – and, building on that strange coincidence into sheer improbability, for the lovely Nick’s other half Jon, who Richard knew as a boy and who Londoner Nick met quite separately long after we had, in turn, become friends.

I read The Weirdstone of Brisingamen many times when I was a boy, and it stayed part of me – instinctively, getting the train up north to see family I always look out for Shuttlingslow as I get towards the end of my journey – but I’d not thought consciously of it for some years, despite having discovered Mr Garner’s Red Shift in a peculiarly vivid way in the early ’90s as a relationship of mine was nearing its end (with his even, improbably, taking me to visit Mow Cop for the only time in my life). Then, in the last year, it’s strange – first I felt the Weirdstone pressing on my mind, with details suddenly flashing back to me, and then almost as if it was intruding insistently into reality. For the first time in decades, I re-read it and its first sequel, The Moon of Gomrath, last September, a little before turning 40, still thrilled.

Then I discovered CDs of both books read by Philip Madoc, always a favourite actor of mine, and gave them to Richard for his birthday early this year. I’d not anticipated just how thrilled he would be, and we listened to them swiftly, enraptured at Madoc’s marvellous voice telling such marvellous tales (and, after a lifetime for each of us pronouncing “Gowther” with a hard ‘th’, changing our minds).

And then, astonishingly, after so many years, Alan Garner announced that he was writing the third – and not just that, but around Jodrell Bank. Alderley Edge was a magical place from Richard’s childhood; both of us had always admired Jodrell, a marvellous scientific achievement of the area; but even more, over the last couple of decades my Dad’s worked there, deploying his natural charisma in public speaking (something I’ve always had to work at) in enthusing and informing people at the Planetarium. Last month I visited my parents; my Dad had just glimpsed an old gentleman who he thought was Alan Garner being shown around, ready for a big event there on the release of Boneland. I found a picture online: “Oh, yes, that was him.” It was all I could do not to squee. And “Do you know the Wizard?” asked my Mum just last Monday. They’d just been to the Inn for a wedding reception at the weekend, for an old college friend of mine for whom Richard and I had attended a very different dedication ceremony some years ago. So it’s as if the trilogy is closing in around me, slipping through the interstices of folk memory to press on my reality.

I’m hugely excited by the looming Boneland. My one regret is that poor old Philip Madoc passed away this Spring, and will never be able to gift it his marvellous voice.

I’d meant to write about The Weirdstone of Brisingamen itself. I haven’t. I’ve always been one for plot, but somehow this book’s always been most present for me in feelings, in moods and mental images. Just as I felt on the edge of its world, it feels between ours and somewhere else, and not just because of its plot, that like much of the best of Doctor Who it’s not about a great event but on the fringes of it, seeing the knights of one war and preserving them for the next. Think of Selina Place, both something like the Cailleach of legend and a modern woman using the highest technology in the novel – a car – and at the heart of a witch brood that’s also a conspiracy of ordinary blokes you might meet down the pub (or be listening in one as the local gossip gives you away). Think of Gowther and Bess, earthy, reassuring, thoroughly normal… But, into the ’60s, almost the last time you can imagine it in ordinary life (I can just, just remember a rag and bone man calling at our road when I was very small), still driving a horse and cart, as if for all their ordinariness they’re half in a time of legend and not awake to the fact.

And the moods and images are because the story deliberately takes you into fears and places that a child could or would get into, of course. The cause of a Wizard’s sorrow may impress itself into ordinary people naming it a “Tear,” and the hooded one in his mist may be right out of a horror film and a pleasurable thrill of fear – with what’s under the hood always staying with you as worse than all the horrors you imagined, because you imagine your own – but it’s the fears of things that could get you playing out in the woods, or the mud, or in caves, even under skies of birds, that strike at the familiar and make your own life feel claustrophobic. Though almost everyone feels utterly claustrophobic after Plankshaft. Throughout my childhood, I loved, but also somehow felt threatened by, winding my way through tiny caves and passages. I’ve been a fat man for a long time, but I was a very thin and gawky boy, and I found a strange satisfaction in twisting my way through places that I couldn’t really twist through. I still have vivid memories of trying to get around a ‘chimney’ in an educational museum that I was really too tall for, or my parents wearily calling me to give up as I forced myself around tiny, chilly cracks between caves in the Peak District. I suspect all that, both fun and fearful, something I enjoyed but dreaded, was a child’s way of dealing with that extraordinarily long, unforgiving account of Colin trying to make it through the dwarves’ improbably horrible tunnels Where no Svart will ever tread.

Coming back to the book as an adult, many of the people and images are still as powerful as ever – putting your trust in Cadellin, being unable to forget being part of his world, the black and terrible storm of the climax as the Morthbrood fly from something greater that we only have a whisper of. I can also feel things to kick against, and wonder if I’m meant to, torn between agreeing with the condemnation both spoken and metaphorical of pollution, and thinking that if elves and dwarves shut us off from magic and then slag us off when we find other ways to live, aren’t they just insufferably up themselves (oh, just wait ’til the sequel)? And the most distinctive, most jarring thing structurally about Alan Garner’s writing, that you’ll find here and throughout his early children’s books: where you might expect a moment to catch your breath after the climax, a coda, some resolution that takes in the aftermath of the grand adventure and adjusting back to our world, for both the children taking part and the children reading… None of that. Every time, within a few short lines of the big finish, the book simply stops – the wrath of Nastrond is coming, it’s coming, it’s nearly here… Firefrost withstands it, it blows itself out, and seventy words later all the bodies have been swirled away,


“And this tale is called the Weirdstone of Brisingamen. And here is an end of it.”

I’ve never known if that abruptness was a deliberate choice, an unpolished craft before books on storytelling structure abounded, or a sign of an author exhausting himself. To me, such Garner books feel like they finish before their time, almost a slap in the face, yet it’s that very incompleteness – a sense of certainty about the big things, and merciless uncertainty about everything else going back into ordinary life – that’s a strangely powerful signature, telling us that, no, people don’t live happily ever after, or if they do, it’s no business of ours, and not easy to find out. The end of the book, like Colin and Susan being separated from the magic, feels like loss rather than comfort in victory. And if anything I’ve heard about Boneland is true, it sounds like Colin’s felt as unresolved for several decades as the readers.