Doctor Who 50 Great Scenes – 48: The Greatest Show In the Galaxy

Counting down towards the fiftieth birthday of Doctor Who with Fifty great scenes… It’s not a Saturday this time, but after a washout of a weekend, why not end the year with a blow-out? This is possibly Sylvester McCoy’s coolest moment as the Doctor – while at the same time almost certainly his hottest. And, as there’s not a lot of dialogue in it, I’m breaking my usual rule (it’s what rules are for) and illustrating this very dynamic scene with not one but three photos. Here comes Sylv’s hot arse to make the year go out with a… 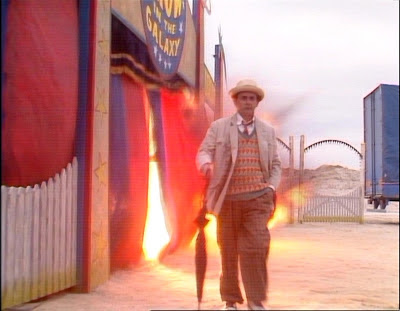 Doctor Who 50 – The Greatest Show In the Galaxy: Flame
With my Fifty restricted to TV Doctor Who, there are sadly no New Adventures – but there is Sylv. And he doesn’t get much more televisual than this moment. At the climax of The Greatest Show in the Galaxy, the Doctor (Sylvester McCoy) has faced down gods, and as things start blowing up and falling apart he walks out of their little world, through the main doorway of a circus marquee. And then a rather small-looking climax becomes something much bigger.

As Sylvester turns and strolls away, a picture of calm and cool, there’s a sheet of flame from the circus entrance that becomes a vast explosion of smoke, sand and debris in a firestorm just behind him. It’s something they could only do in one take, and to his credit, he gives just the tiniest of blinks but not the slightest wobble in his saunter as all hell breaks loose in the background. Despite, as he’s said later, not knowing if there were any clothes left on his back or, indeed, if he still had a bum once he felt the blast hit him. 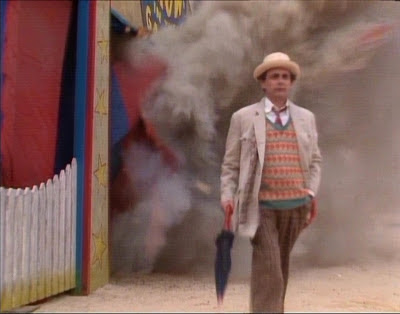 Doctor Who 50 – The Greatest Show In the Galaxy: Blast
For a story that’s been all about Doctor Who, how more perfect an ending could there be than this? Sylvester McCoy’s time as the Doctor is when the BBC’s pyromaniacs explosives experts reached their peak, achieving the firepower and enthusiasm to make explosions very, very much bigger than they were supposed to, but just before the BBC’s health and safety people started really meaning it. The seventh Doctor’s on-screen adventures had spaceships blowing up excitingly in space or still more excitingly on the ground, and out on the streets even Daleks blasting the hell out of each other (as I featured a few weeks ago). But it’s this that’s the biggest, most absurdly dangerous bang of them all, showing just how much they could get away with by shooting on location – and even followed by stallholder Peggy Mount postmodernly complaining to her horse that they’ve got “no consideration for those of us that live ’ere!”

This is the Doctor’s attitude to cleaning up the mess after each adventure summarised in one perfect shot of him sauntering off without a backward glance as everything goes to blazes behind him. 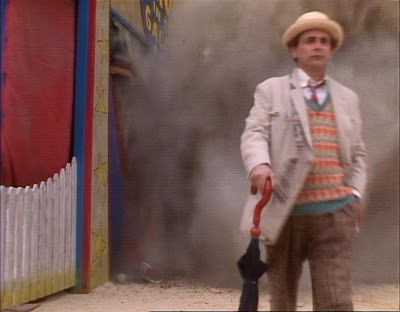 Doctor Who 50 – The Greatest Show In the Galaxy: Cool

Another brilliant example of what happens after the Doctor (Colin Baker) wins – funny, hopeful and downbeat all at the same time. The planet of Varos will no longer be exploited, probably, and no longer placate its citizens and export markets with murderous reality TV, probably. At least, that’s what the planet’s Governor says, and it’s a good job he’s sounding kindly and vowing “justice and peace and tolerance” to the viewers at home now, because it looks like he’ll no longer have to face deadly vote-ins now, so there’s no way to get rid of him now, probably. Throughout the story, two of those viewers at home have been passively following events, and now Arak (Stephen Yardley) – grim – and Etta (Sheila Reid) – wondering – have to work out, for the first time in their lives, what they’ll do when they have a choice.

Because for the first time in their lives, there’s nothing on the empty screen to tell them. It’s a great coda to a story about television, beautifully played, and a satire on the old ‘moral to camera’ as epilogue. As well as anticipating by twenty years Russell T Davies’ Doctor Who in not just his love of reality TV, but ending where he started by asking, “Why Don’t You…?” No comfy New Year’s Resolutions here – just the chilly freedom of the future.


Next Time… One day he’ll come back… But what happened next?

Labels: Colin Baker, Doctor Who, Doctor Who 50, Pictures, Sylvester McCoy, The Greatest Show In the Galaxy

Comments:
I'm glad we got another year of McCoy, but I do think that would have made a perfect scene for a regeneration - the Doctor in the collapsing arena, raising his hat and literally taking a final bow, before sauntering out and being caught in the explosion as the circus dies. Then, as the smoke and flame clear, the new man appears, born in flame, walking towards the camera as if he hadn't so much as broken stride while being reborn.

That's a fabulous idea. Though I think I still prefer Sylv and his mighty arse!