Counting down towards the fiftieth birthday of Doctor Who with Fifty great scenes… This time it’s a brilliantly inventive mix of comedy and horror, taken from a 1987 story that brought the Doctor not to a shiny spaceship or a stylised English village but to a run-down tower block – run by Richard Briers. Paradise Towers is a grossly underappreciated story, and this scene would have been higher still in my Fifty were it not that I wanted to skip forward in order to give my own little tribute to Mr Briers. 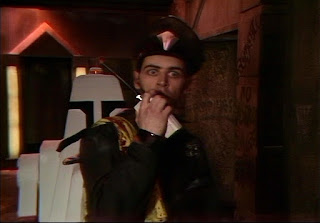 Doctor Who 50 – Paradise Towers
I gave Paradise Towers a rave review when it came out on DVD, so I’ve already gone over it in some detail and even, for the first time in my Fifty, already celebrated this particular scene as a Golden Moment. So for added value for long-term readers, this version’s different. As with much great Doctor Who, there’s always something new to get out of it, and only a week or so ago, when already thinking about this entry, I realised there was another blatant source for the story that I’d previously not connected with it. Seeing some barking libertarian talking head on the telly, Richard’s and my mature response was to cast Carry On Up The Fountainhead (‘How d’you know she is?’ ‘What?’ ‘Randy!’). The Fountainhead word-associated to Fountain of Happiness Square, where the Doctor (Sylvester McCoy) and Mel first step out into dilapidated architectural marvel Paradise Towers. Something suddenly clicked in my head, and I suddenly realised that this tale of a solipsistic architect arrogantly careless of the people who might get in the way of his grand designs was more than a touch Carry On Ayn Rand already, cocking a snook at the ‘superior’. It was some time after that point that I realised the Great Architect Kroagnon’s name is half-derived from the grating architect Roark. Oh well. So much for brilliantly detailed analysis.

Anyway, arriving to see the sights of the acclaimed architectural triumph Paradise Towers, the Doctor and Mel find it’s a right old sight. The Doctor finds things to delight in, but Mel’s been listening to the fans:


“Just rubbish!”
“Nothing’s just rubbish if you have an enquiring mind.”

Their reactions are similarly divided on running into a gang of girls who’ve created names, crossbows and a culture from their surroundings: “Bin Liner,” declaims one as she sashays menacingly forward to introduce herself our heroes. The Doctor’s soon reciprocated and is caught up in a joyous dance with these Kangs… Mel stands grimly at the back. At crossbow-point. I always laugh at the exuberant wordplay, but in a more disturbing set of scenes in another part of the graffiti-covered, litter-strewn Towers cross-cut with these playful ones, we can see it’s not all fun and games.

A Caretaker is moving nervously along a darkened corridor, walkie-talkie in hand, as much to seek reassurance as to make his report to his Chief (Richard Briers, at this stage only heard). I loved the dirty set design, the low lighting, the sinister silhouette against the window – in a properly crapulent ’80s tower block, it always felt like Doctor Who had finally landed somewhere close to home, both bringing the series up to date and making it that much more unsettling. And, of course, like so many blocks of flats, the Caretakers are bugger all use. Is he fixing the lights, cleaning the wall-scrawl, offering help and advice to visitors? No. He’s as scared as the rest of us. And it’s the running commentary of his fear that really makes this scene, with Joseph Young’s captivating performance of a minor authority figure out of his depth as he finds mounting evidence of murder, even as his boss’ voice keeps crackling testily back at him that nothing’s the matter. Even the sinister bass of the music adds to the atmosphere.

But if it’s not the Kangs fighting among themselves, what could have killed the young woman we saw scream her last in the episode’s opening moments? What should be on the side of the Caretakers, under their control, but have become a law to themselves and almost a mythical sight? Surely not the Mark 7 Megapodic Cleaners? And while in many Doctor Who stories the sight of them might have been saved for the cliffhanger, and in many Doctor Who stories that take themselves more seriously the sight of such an unconvincing robot might wound the story terribly, the essential absurdity that these are the cosy cleaners that have gone on the rampage prepares you for what is, basically, a very unthreatening hoover with ideas above its station. And when Mr Briers at last sounds sympathetic, his punchline – exactly on the line between horror and comedy – is pitch-perfect.


Bonus Great Doctor Who Quotation – The Face of Evil

It’s six minutes into Part Four: there’s a mad computer in denial; two tribes of believers on the point of losing faith; and the Doctor wisecracking while his new companion the local freethinker tries to kill him. Unusually, it’s not just because of his sense of humour. But never mind all that. This time, the quote really speaks for itself…


“You know, the very powerful and the very stupid have one thing in common… They don’t alter their views to fit the facts; they alter the facts to fit their views. Which can be uncomfortable, if you happen to be one of the facts that needs altering.”

Next Time… It’s about timey-wimey (oh, just shoot me for typing that).

“I have played straight drama, which I love, but I eventually miss doing comedy because we are in such miserable times. And I do feel that my purpose in life is to cheer people up.” 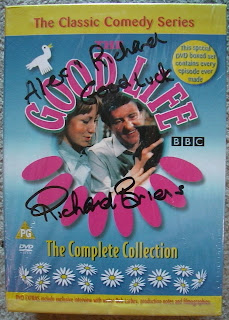 The Good Life
Richard Briers was a figure from as far back as I can remember. Not always a comforting figure – even Tom Good had something slightly unhinged about him. I was most fond of him for Roobarb, who was just barking (and it’s sad to read that Bob Godfrey, the brilliant animator of those vibrating lines of Roobarb and Custard and all, has died in the last week, too). Grown up, I can still cackle at his drunken flirting with Margo, and came to appreciate his Martin in Ever Decreasing Circles – who I’d never warmed to when I was younger, but now see as a searing docu-drama about a typical Lib Dem local party committee member [in the commentary on a Christmas episode, the cast are asked about their most unusual roles. Richard Briers: “Mine was Doctor Who, a long, long time ago, when I played Hitler.” Peter Egan cuts in as Paul-to-Martin: “Oh, I don’t think you’d be miscast as Hitler… In fact, I think he’s a bit left-wing for you.” Richard-as-Martin: “I wish I’d never said anything now.” They fall about… The interviewer, of course, excitedly remembers Paradise Towers. Penelope Wilton modestly adds “I’ve been the Prime Minister,” which Mr Briers watched, and both her co-stars impressively get the literary reference to Sycorax. But I digress].

Mr Briers gave many brilliant straight drama performances, too – by one of those horrible coincidences that meant we’d never have put it on the following day, the night he died we were watching him in Midsomer Murders – Death’s Shadow. But he’s rather fine, and rather sad, in that, too; it’s a murder mystery, and a good one, so I shan’t tell you what he’s reacting to, but (my) Richard and I were each gripped by one particularly well-played reaction from him (17.20 and 1.34.58 in respectively, if you have it). And then there’s Paradise Towers.

Oh well. He’s not all bad in it – he is absolutely perfect as the foil nagging at the young Caretaker over the comms, then that moment of belated, inappropriate tenderness. He’s almost forced to be great when he and Sylvester swap roles as the Chief interrogates the Doctor. And he’s suddenly touching in peril at the end of Part Three. But, for the most part, he was ever after refreshingly candid that he ignored the producer and just wanted to have fun with it, so for much of it he is blankwallandcleaneringly terrible, albeit abetted by the designers festooning him as Hitler On Ice (in the words of some infamous review that escapes me). And yet, after two decades of fans glowering at him, he was a guest at the first convention I ever attended and brought the house down within seconds of coming on stage – by apologising for underplaying. I’ve never seen such instantaneous forgiveness.

So I want to say two things about Richard Briers in person. I met him twice, each time at the end of hours’-long autograph queues where most actors inevitably get tired and testy, yet he was never anything other than charming, enthusiastic and interested. The second time was an appearance at the Stamp Centre on the Strand, with his wife Ann Davies (who’s also lovely) and Tom Baker, where Tom was an old hand at these things while Richard was not only being the straight man to Tom’s booming rudery, but constantly looking about him with a delighted smile as if he couldn’t believe he’d got to his seventies without discovering such utter joy as being in a cramped shop packed with a never-ending queue for which he wasn’t even the main attraction. Was he a genuinely lovely man who really was personally interested and delighted in every single person he met? Or was he a brilliant actor who was able to fake it and extemporise interested things to say for four hours non-stop just because that would give all the queuers a happy experience to take home with them – which would also make him a genuinely lovely man?

One of the things I asked Tom (Tom Bad, perhaps I should call him, to make a distinction from the man signing my The Good Life set) to autograph that day was a photo I rather liked of him as the Doctor, with K9, from the 1980 story Full Circle. Unusually for a Doctor Who location shoot, the sun was blazing, and Tom’s rich red coat set among suddenly vibrant green leaves looked stunning, the whole image far more exotic than it had any right to be. He took it, and sat back.

Richard Briers leant over, fascinated, his eyes lighting up.


“You went all over the world in your show!” 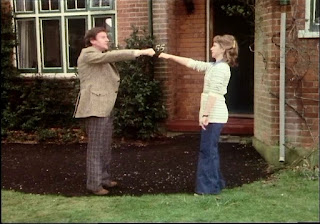 Tom and Barbara – Daleks
Not all actors – particularly ex-famous ones – took so well to being surrounded by people to whom they weren’t the lead. Back at that very first convention I attended, one actor – let’s call him Mr G— – had been a big soap star but had played only one minor character in Doctor Who, and was volubly aggrieved that his queue was much, much shorter than those for people he’d never heard of. Visibly more and more sour with the people he was signing for, when he stomped off at the end of his session Mr G— let rip in the green room, embarrassing most of his fellow guests with a tirade against “bloody anoraks” (that is, fans who didn’t properly appreciate him as the most important person in the hall, or perhaps the world). By contrast, I also once met Mr G—’s on-screen soap wife after she’d much later taken a role in an audio Doctor Who and, like Mr Briers, she came across as delighted and delightful in a similar setting. But back in that green room with Mr G—, for a few seconds there was silence. Then Richard Briers took a sip of tea, and looked up, with a mild but firm tone, to tell him:


“Those ‘anoraks’ are paying your wages.”

So, farewell, Richard Briers. You’ll be missed. My condolences to Ann and the rest of your family and friends. And thank you for being a genuinely lovely man.