Counting down towards the fiftieth birthday of Doctor Who with Fifty great scenes… Tonight’s is an especially fine cliffhanger moment, so if you’ve never experienced Enlightenment, meditate. Or, to remain unspoilered, pop in the third DVD from Doctor Who – The Black Guardian Trilogy and play Part One. Now you can safely look at the screenshot and the snippet of script below, and read just what captivates me aboard a mysterious Edwardian clipper. It’s from an eerie 1983 tale, Doctor Who’s first to be both written and directed by women, visually and emotionally unsettling, and the most striking revelation is…


“Electronics – on an Edwardian racing yacht?”
“Look at the screen. We’re not on a yacht – we’re on a ship. A spaceship.” 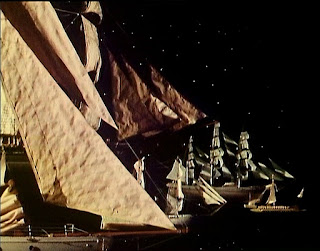 Doctor Who 50 – Enlightenment
There’s no way to conceal that reveal in any meaningful picture or quote, but I hope you’ll still enjoy with me how the puzzle builds up. It’s an old-fashioned Part One were the mystery slowly develops as our heroes explore, though introduced by a more unusual raising of the stakes.

The TARDIS has been caught in mid-flight by mixed signals from god and the devil – more or less, but certainly among the more blatant authorial voices to introduce a story – and the Doctor (Peter Davison) charged with intervening in a race that no-one must win. They materialise unexpectedly on an Edwardian racing clipper where what seems a perfectly ordinary crew are kept below, matey enough but strangely ignorant of the object of the race – while reading newspaper reports of the first British submarine launch to keep themselves occupied. Can this be the right place? They’re hardly a threat to the peace and harmony of the Universe. And surely neither are the officers, even if they seem to be taking the Edwardian upper class to extremes, stiff-faced, clipped-voiced and not the mingling type. The Captain (Keith Barron) seems to take a cold interest in the Doctor; the First Mate, Mr Marriner, an unnerving one in Tegan; and bluff old hand Jackson (Tony Caunter, Eastenders’ Roy) a protective one in Turlough.

The men are whistled aloft, and Turlough ducks out of following them on deck and up the rigging – you can’t blame him, as a crewman’s scream of terror echoes from above. Perhaps it’s just his first time. As Tegan’s taken to the wheelhouse, she sees what seem to be wetsuits hanging in the companionway. And why is it so dark outside? While the Captain and Mate attend to the race, the Doctor recognises the race marker buoys on the chart as something rather more significant… As Malcolm Clarke’s music plays a deceptively innocent watery dance, Marriner opens a lacquered wooden panel. Beneath, a decorously concealed set of controls and, with a touch and a proud fanfare, wooden shutters open to reveal a line of ‘sailing ships’ in the styles of different Earth historical periods all floating effortlessly in space, ready to sail round the planets of our solar system in a race to win… What?

Back when I reviewed this on the DVD’s release, I chose another, less spoilery golden moment to protect anyone who’d not seen it, but I still had to allude to this one – all three of Enlightenment’s cliffhangers are crackers, but the first is one of the most memorable cliffhangers of the ’80s. It’s a distinctive Doctor Who ‘What the hell’s going on?’ twist: not just a strange juxtaposition or something going wrong with time, but the revelation that what’s really going on in what looks like history is so weird that it’s beyond even time travel. Even Doctor Who offers just a handful of such stories, but they tend to be among its best. Enlightenment is, for me, certainly one of most interesting stories in Peter Davison’s time as the Doctor, and similar claims can be made for its two most notable predecessors.

The War Games apparently begins with the Doctor (Patrick Troughton) arriving in one of the most terrible times in Earth’s history, the trenches of the First World War – but, while mud, artillery barrages and an Adjutant shocked that soldiers fighting for their lives should fail to fill out forms keeping track of shovels are all present and correct, the General is not merely brutal but sinisterly hypnotic, and what’s that video screen, or strangely TARDIS-like machine? At the cliffhanger to Episode Two, our heroes team flee in an ambulance with an officer and a nurse who’ve sensed that something’s wrong – only to go literally off the edge of the map and find themselves, disorientatingly, attacked by a chariot and legionaries.


“Doctor, who were those people who attacked us just now?”
“Oh, they were Romans.”
“But that’s impossible!”
“Oh, lots of impossible things happen when you pass through time.”

Arguably stranger still is Carnival of Monsters, in which the Doctor (Jon Pertwee)… Well, the best way to introduce it is still with the book’s brilliant tagline:


“The Doctor and Jo land on a cargo ship crossing the Indian Ocean in the year 1926.
“Or so they think.”

And yet, for me, brilliant as both of those stories and their own bizarre cliffhangers are, for its perfectly building mystery and visual style, Enlightenment still beats both of them.


Bonus Great Doctor Who Quotation – The Curse of Fenric

A story that’s not just one of the best for its Doctor, but for any Doctor; a ship that’s not flying, but drowned; and a chilling build-up to a stunning cliffhanger moment. So why haven’t I picked this as one of the Fifty in its own right? Well… It has a stunning cliffhanger moment – but it’s not the cliffhanger. The Curse of Fenric is outstanding in so many ways – a complex drama, a horror story, a World War II and pre-emptively Cold War action thriller – but just about the only element it fumbles is the first cliffhanger, choosing instead the banal cliché of ‘Doctor and companion surrounded by men with guns who will predictably not kill them next week’. As a result, to reveal these lines as the Golden Moment they deserve to be would require excavation and careful archaeological reconstruction, sunken as they are around the end of Part One and the beginning of Part Two or deep in the murky structure of the Special Edition. One day, I’ll get hold of some DVD-editing software and hold up that marvellous cliffhanger (its climax some two and a half minutes into Part Two, or twenty-nine into the feature-length version) to the light. Until then, there’s the skein of a marvellously atmospheric narration running through it.

Strange happenings surround the secret base on the East Coast where Dr Judson toils over a thinking machine devised to unearth enemy cyphers. A crack force of Russian soldiers aims to steal the device, but too many of them are going missing in the sea mist, or found drained of blood. Obscenely warped metal-coral artefacts found on the shore are seized by obscenely warped claws from under the waves. And the Doctor (Sylvester McCoy) seems fascinated by the carvings made by doomed Viking pirates a thousand years ago. Judson, too, has his codebreaker’s curiosity stirred by the Ninth-Century runes in the old vaults beneath the parish church. Then the frightened vicar – a superbly underplayed Nicholas Parsons, already featured in my Eleven More Great Scenes – brings the Doctor his grandfather’s translation of the Viking inscriptions…

In a story bursting with memorable words and images, one of the most atmospheric sequences has – very rarely for Doctor Who – a voice-over, written by the long-dead, passed between different characters and all absolutely mesmerising. The Doctor begins the narration, sober but leaping into excitement; he passes the Victorian vicar’s work to Judson, who takes it up greedily, unable to resist the answer to the puzzle; the base commander speaks a few lines in sick dread; and Judson reads to the end as, all the while, cross-cutting images suggest that to excavate the words and speak them aloud is to resurrect the demonic enemy buried with them. Swimmers watched from under the water… The great old stone slabs carved with runes… The barnacled dragonship long sunken beneath the waves of Maidens’ Point, the fresh corpse of a Russian soldier ensnared by the weeds round the long dragon neck… The final stone slab left suggestively smooth… The bloated claw caressing the head of the dragon…

We hope to return to the North Way,
carrying home the Oriental treasures
from the Silk Lands in the East,
but the dark curse follows our dragonship.

Black fog turned day into night,
and the fingers of death
reached out from the waters
to reclaim the treasures we have stolen.

I carve these stones in memory of
Asmund, Grimvald, Torkal, Halfdan.
Brave Viking warriors slain by the curse.

We sought haven in Northumbria,
and took refuge at a place called Maidens’ Bay,
but the curse of the treasure
has followed us to this place.

Night is the time of the evil curse,
and no man is safe alone.
The waters are most dangerous.

The dark evil lies waiting in the sea.
It has followed the treasure we stole.
We cannot see it, but we know it is there,
beneath the surface,
beyond seeing,
but it is there.

And one by one,
our crew is being killed.

I warn of the day when the Earth shall fall asunder
and all of Heaven too.
The Wolves of Fenric shall return for their treasure
and then shall the dark evil rule eternally.

I am the only one left alive now.
I raise these stones to my wife Astrid.
May she forgive my sin.
The day grows dark and I sense
the evil curse rising from the sea.

I know now what the Curse of Fenric seeks.
The treasures from the Silk Lands in the East.

Tonight, I shall die.
And the words die with me.

And, beneath the waters of Maiden’s Point, the eyes of the drowned Russian commando suddenly spring open.


When I drew up the full Fifty, this entry was going to begin three weeks where, out of sheer perversity, I picked something strange happening with time. Well, I didn’t expect to get quite so far behind, so it won’t be three time in a row: the other two will come shortly, but for the next one I’m skipping straight to the scene I had planned for last weekend and Number 41…

Next Time… An unhelpful boss (but a genuinely lovely man).