How are you with Photoshop, flags and Batman?

Last night’s LBC debate between Nick Clegg and Nigel Farage saw one of the most telling clashes about crime. Nick said we were better off IN to fight crime and get better justice. Nigel said he was so hell-bent against any form of European co-operation that he’d rather see cross-border criminals go free on killing sprees and British tourists locked up without help.

So where is the Photoshopped poster of Nick Clegg as Batman (in half-EU stars, half-Union Jack Batsuit) vs Nigel Farage, the Joker, saying ‘Together, We Fight Crime’? Your turn! Can you take this opportunity to turn them into a colourful graphic before next week’s rematch? 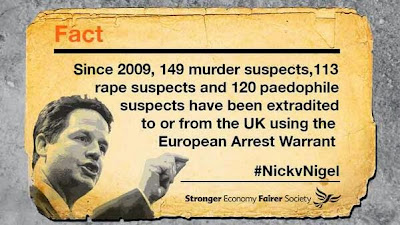 Here’s the Cast of Characters I’m Looking For

He won’t thank you, but I will.


Nigel Farage IS the Joker

UKIP’s colours already run to the purple suit, so that’s most of the work done already. Just change the sickly green highlights to sickly yellow, and you’re away. With an exaggerated downturned grimace of hatred for immigrants instead of a grin!

Yes, I know that the real Mr Farage’s face goes frothing-mad beetroot rather than deathly pale, but no fictional character could be as ludicrous as the real thing.


And if you’re up to a few minor supporting characters, even though they were too scared to appear in the story and bottled it…

Hinting at ‘OUT’ to his Conservative Party members, reassuring he’s ‘IN’ to the public at large!


Ed Miliband IS the Riddler

What will his policy be? Search for Labour’s deviously concealed and indecipherable off-the-record briefing clues to see if you can work it out!


Riddle me this: is Mr Miliband already regretting running away from the debate and leaving the leadership of the whole progressive side of British politics to Nick Clegg because Ed was terrified of losing the racist vote? This morning’s off-the-record Riddler clue says that next year, anyway, he’d be happy to debate Nigel Farage as well as Nick Clegg, and accuses Two-Face of being cowardly. Which makes cowardly Mr Miliband pretty two-faced himself.

But riddle me that: if all the other three Leaders are willing to debate each other before the 2015 General Election, and Mr Cameron tries to run away, will that any longer be enough to stop the debates happening? As of this week, the broadcasters – LBC, Sky and BBC all helping stage the two European debates – have accepted the precedent that if a Party Leader, even the Prime Minister, is invited to a debate but too frit to show up, they can go ahead anyway and just leave him looking like the cowardly bottler he is.

So if Mr Cameron thinks he’s got a veto on the Leaders’ Debates… Toss a coin. (Two-)Heads, it’s an empty chair for the frit PM.