Two Married Men Say Thank You to the Liberal Democrats


On Sunday, Richard and I celebrated six months of marriage. 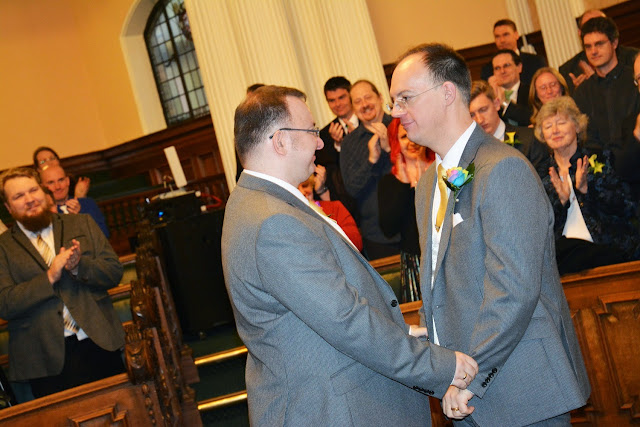 And two-hundred-and-forty-six months since we’ve been together. 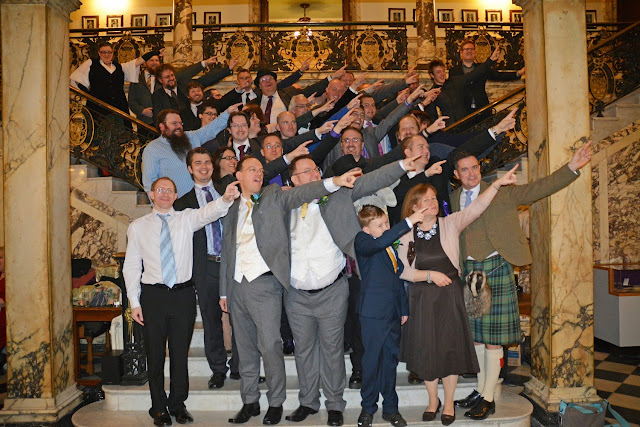 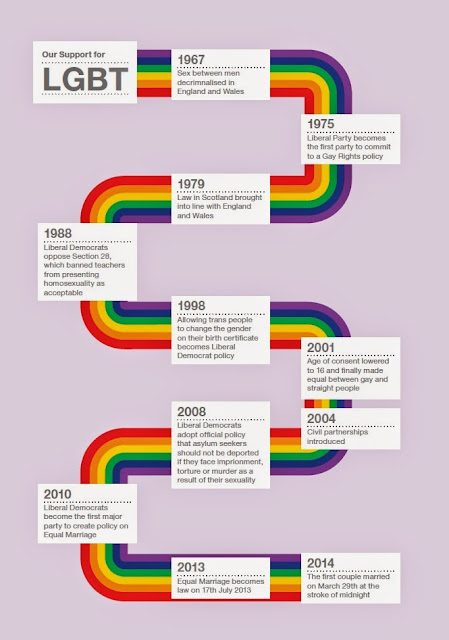 It was a fantastic day.

So many wonderful people celebrating with us.

And so much food.

We’ve been together a long time, and we’ve been to a lot of weddings, and there’s never enough food.

Trust us on this. If you ever get married –

– which is fantastic, by the way –

– then feed people and they’ll be happy enough that they listen to your speeches.

But the thing about us getting married is, we had to wait a long time.

It wasn’t that we had very strict parents.

You see, I met Alex

And I met Richard

And we fell in love.

And we got together twenty years and six months ago today.

So we got married six months ago today.

So it was a long wait.

In fact, we had to wait

Until the Liberal Democrats were in government.

In the ’70s, when we were born, only one party said as a matter of principle that they backed gay rights.

That was the Liberals.

In the ’80s, when we were at school, one party brought in Section 28, to put bashing the gays into law.

Only one party opposed Section 28 from the first.

Labour were in favour of it.

But they didn’t do anything about it when they had the power to in the ’90s.

In fact the bit of Britain that first got rid of it was Scotland, in the early 2000s.

When the Liberal Democrats were in coalition there.

Labour had absolute power in Westminster back then.

But they didn’t bother changing the law for the rest of us until much later.

I remember the 1992 election, when one of the three big extreme things Jeremy Paxman sneered at a party leader for was supporting gay rights.

That was Paddy Ashdown and the Liberal Democrats, and he stuck to his guns.

That was Paddy Ashdown.

I remember the 1997 election, when one of the three big things the Daily Telegraph said a party’s manifesto was dangerously extreme for was supporting lesbian and gay rights.

And eventually, in 2001, one party came up with the first ever Manifesto for Lesbian, Gay, Bisexual and Transgender People.

And all the promises in there were in their main manifesto too.

And they did the same thing again at the next election.

And meanwhile the other parties either kept on hating the gays

Or just didn’t have the balls to do anything in case it put people off.

Labour and the Tories voted them down. They were both against it before they were for it.

And even then the Liberal Democrats wanted civil partnerships as a choice for both same-sex and mixed-sex couples.

But both Labour and the Tories have always said those can only be a second-class option for the gays.

The government spent thousands and thousands of pounds of taxpayers’ money in court opposing an equal age of consent.

That was the Labour Government.

They lost. And the government spent thousands and thousands of pounds of taxpayers’ money in court defending the ban on gays in the military.

That was the Labour Government.

They lost that too.

Remember that they only did it because they lost in court and the court made them do it.

Remember that they only did it because they lost in court and the court made them do it.

The Labour Party’s boasts are like a burglar caught red-handed and then found guilty who then tries to claim credit for giving all your stolen stuff back.

When you know they’re the ones who nicked it in the first place and only the court made them do it.

And then when the Coalition was formed in 2010

Only one party leader had said he was in favour of equal marriage.

That was Nick Clegg for the Liberal Democrats.

And that year the first British party ever voted to back equal marriage.

And eventually the Lib Dems persuaded the leader of another party.

That was David Cameron for the Tories.

And later than that, another party said there was no need to have equal marriage – but in the end came in third to back it once it was already happening.

That was the Labour Party. They were against that before they were for it, too.

And one party was badly split about it.

And a lot of their MPs said they backed equal marriage because it was a “gesture” to “detoxify their brand”.

So as it was only a gesture, we can think of a few gestures to make in return.

But this isn’t tagged as an explicit video.

And another party didn’t care, and hadn’t bothered doing it when they had absolute power for thirteen whole years, but they jumped on the bandwagon last and then tried to claim all the credit.

That was the Labour Party.

But at least this time they didn’t oppose it tooth and nail until the courts made them do it.

No. So that’s something, I suppose.

But when one party said that to make it all properly equal, let’s make the law equal marriage for trans people too, and open up civil partnerships to mixed-sex couples so everyone has more choices

The other parties said

No thanks, you’ve had your gesture, that’s your lot.

That was Labour and the Tories.

So next time any important issue of lesbian, gay, bisexual and transgender rights comes up in Parliament…

Two parties will swing with the wind and just vote whichever way’s fashionable.

That will be Labour and the Tories.

Because they always have. So you’d better hope lesbian, gay, bisexual and transgender people happen to be popular that year.

Good luck with that.

And one party will vote for equality for everyone.

That’ll be the Liberal Democrats.

Because we always have.

Because Liberal Democrats believe in freedom and opportunity for everyone.

Freedom for every individual

For fairness and equality before the law

Thank you, the Liberal Democrats, for changing the law so we could get married.

We had to wait twenty years

Some of them Tory years

Some of them Labour years

Without the Liberal Democrats in Government, we’d still be waiting.

Comments:
If you’re wondering about the scarf – either the non-Doctor Who fans who don’t recognise it, or the Doctor Who fans who are thinking, ‘That’s an interesting version, where did they get it?’ – and why it makes us think of our wedding, here’s the full story from the lovely Holly, who knitted it for us. And more!