Moffat's Latest Knock-off Exposed – The Secret of Doctor Who

A Merry Doctor Who Special Day to you all, and there's just time, with Ronnie Corbett in full flow on TV and Richard coughing over his turkey at putting on some lederhosen, for me to spoiler an ultra-special Christmas secret. I've got to tell you: Doctor Who Supremo Steven Moffat very nearly pulled off a cracker of a con-job. You think, don't you, that tonight's story is going to be A Christmas Carol again? Honestly. As if the ever-inventive* Mr Moffat would give us such a Dickensian old chestnut that the series first did it more than twenty years ago! Why, just this afternoon we put on the Christmas turkey with killer sprouts**, and even I wrote an A Christmas Carol-referencing Doctor Who story for a friend over a decade ago (it's that obvious an idea. Come to think of it, even Blackadder did it, with the same Doctor Who companion that the Doctor did. And that's on again tonight, too). So it's a brilliant Yuletide prank, isn't it, that Mr Moffat's managed to convince everyone that he's just doing the same again.

So of course it's something much more original. Ignore the Continuity Errors. Yes, from the man who in 2007 brought a Doctor Who story to the screen that he'd first published in the Annual a couple of years earlier, and who this year commissioned Gareth Roberts to adapt a Doctor Who Magazine comic strip for TV, tonight I'm hugely excited to reveal he's got a special adaptation of one of the greatest of all Doctor Who stories, The Iron Legion. Oh, you were going to be so surprised! Which is why, amid all the fake "Dickens" clips (and to think everybody's fallen for it – biggest whopper printed in the Radio Times since Neil Toynay last guest-starred), when they accidentally let through a shot from the real Christmas special, Mr Moffat went hopping mad. Such incompetence! It's amazing so few people spotted it, but just before General Ironicus thrills and delights you by striding onto your screen at 6pm, here's the clip that let it slip, where the real Malevilus Temple was inadvertently revealed. 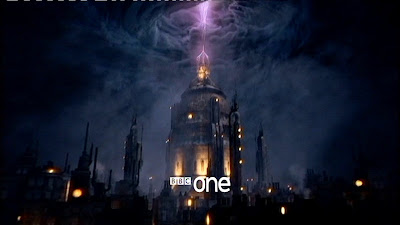 Temple of the Gods 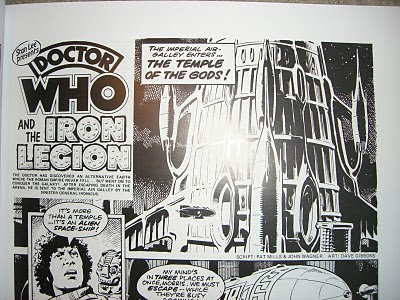 Sorry to spoil the surprise early.

Will there be any more blogs from me to mark the end of my least productive year yet? With a bit of luck, I might soon be publishing an arguably better-informed review of a spectacularly unChristmassy Doctor Who story. But, as is so often the way, I've got to the end with no problem, but am having difficulty with the start (and it's not even one of Mr Moffat's timey-wimeys).


Apologies, one and all, for my not having sent a single Christmas card. Well, that's not quite true (how unlike most of this post). I handed one to my beloved this morning in person, and I did post one to my Grandma in New Hampshire, as the alternative is execution (only joking). But having been distinctly ill and only out of the flat three times in three weeks, I'm afraid I've not done very much that's Christmassy for the people I love. Except the lovely one who made dinner for me this very afternoon and generally makes life worth living.


And finally, as my previous post was filled with rather unseasonable language, perhaps I could make up for it with a piece of festive opinion polling…

**Unlike most of this post, it is in fact true that while eating Christmas dinner we watched Doctor Who's The Trial of a Time Lord Part Eleven

Comments:
And after all that, it turned out to be The Glass Princess twinned with The Girl In the Cold Plaice! I'm shocked.

And I told you to ignore the Continuity Errors.