No Liberal Democrats on this evening’s Question Time doesn’t mean a lack of political balance, the BBC claimed tonight, pointing out that while the guests may all be authoritarian illiberal egomaniacs, they’re different colours (pictured). In previous years, the BBC justified multiple Labour panellists because they were the government. Now the Lib Dems are in government, 60% of tonight’s panel consists of a Labour MP, a Labour-supporting journalist and a trades union boss. Pressed, a spokesperson apologised:

‘When we said before that the Liberal Democrats were irrelevant and didn’t deserve representation because they’d never be in government, we were wrong.

‘We meant to say that the Liberal Democrats are irrelevant and don’t need representation because they are in government, and that people are much more interested in hearing what the Labour Party’s impotent position is. Unfortunately, with only three guests tonight from the Labour movement not all of their positions will be properly represented.

‘We apologise for this omission and will rectify it on next week’s show, when all five panellists will be Labourites and guaranteed to agree on absolutely nothing except that, whatever the problem is, it’s all the fault of the evil Tories who were in power for the last thirteen years and destroyed the economy. I’m sorry, what?’ 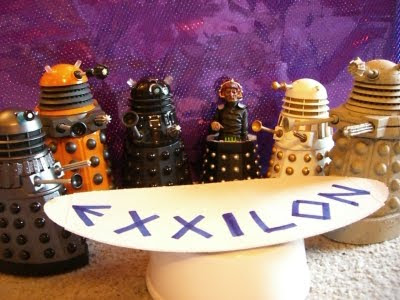 ‘Look, he may still be a Dalek, but to represent the Coalition, Travel Machine Secretary Philip Hammond has been painted orange. What more do you want?’

Of the other guests, rumours that Polly Toynbee is blatantly a fossilised relic of the ’80s have been strenuously denied confirmed. ‘It’s a fair cop,’ the BBC admitted.

The BBC complaints form can be found here.