Counting down on every Saturday towards the fiftieth birthday of Doctor Who with Fifty great scenes… For this week, what else could it be but Christmas? Though some swear by Dickens – Doctor Who having four Victorian Christmases in seven years, which might just be considered festive overindulgence – what could be more Christmassy than Bernard Cribbins, stained glass, a choir, nightmares, James Bond grimly predicting the end of the world and Bad Santa* with his beard laughing and laughing and laughing? So, as we wait for snow…

“Who knows? Perhaps he’s coming back.”
“Oh, that would make my Christmas.” 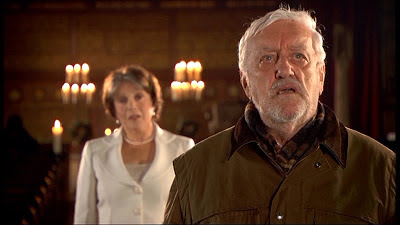 Doctor Who 50 – The End of Time
Russell T Davies’ ministry to us ended as it began: zooming in to Earth from space to London streets and the Doctor’s companion. But now, instead of young, excitable Billie Piper, it’s old, troubled Bernard Cribbins; not bright morning, but dark night; not Murray Gold’s upbeat music as the camera races around town, but a mournful old brass band playing Klokleda Partha Mennin Klatch as people slowly wander, alone. And across it all, the ominous voice of he-only-thinks-he’s-God telling us of a pagan rite to banish the cold and the dark, of nightmares of fire and war and insanity, and of the final days of planet Earth…

Stepping back one story from last week’s Number 50, Number 49 in the chart is from a story that made an appearance in one of my not-quite-in-the-Fifty posts three weeks ago, for its cliffhanger. Compiling the Fifty, I realised that I had many cliffhangers but was rather lacking in their modern little brothers, the pre-titles sequence, so I chose this one as particularly special to me. Bernard Cribbins’ Wilfred Mott is an utterly loveable character, both for his joy and sadness, his bravery and dread, and for simply being Bernard Cribbins. Not a churchgoer, the old man is drawn by singing and light to an old church one cold Winter’s night. He takes off his hat, framed against the war memorial at the back of the church, and looks in wonder down the nave towards the stained glass window, and something strangely familiar depicted in the corner of it.

It might be the woman in white, framed with her own halo, who appears behind Wilf; it might be the stained glass TARDIS, tonight on the brink of Doctor Who’s Fiftieth Anniversary recalling the finest story of the Fortieth, Rob Shearman’s Jubilee, which in turn influenced Russell T Davies’ Doctor Who; it might be The Legend of the Blue Box, in which long ago the Sainted Physician followed a demon down from the sky to this site, smote it and vanished, later immortalised in glass. It might even be the Master’s laughter echoing through poor Wilf’s head as the end tumbles closer, the Doctor (David Tennant)’s old friend seeing flashes of the Doctor’s much older friend as he throws back his head and cackles, the camera zooming into his eye as the titles cut in. But I think it’s just that yearning as Wilf looks toward the TARDIS and wishes with all his heart that it was there. We all have that.


I offered my choice of Seasonal songs a few weeks ago; for some strange reason, I didn’t include any of Bernard Cribbins’ hits. But you can. Or, if you want another friend of the Doctor’s singing, here are some brand new Songtaran Carols to tide you over ’til Tuesday.


Bonus Great Doctor Who Quotation – The Doctor, the Widow and the Wardrobe

“Lily and Cyril’s room. I’m going to be honest: masterpiece! The ultimate bedroom. A science-wiencey workbench – a jungle – a maze – a window disguised as a mirror – a mirror disguised as a window! Selection of torches, for midnight feasts and secret reading. Zen garden – mysterious cupboard – zone of tranquillity – rubber wall – dream tank – exact model of the rest of the house, not quite to scale, apologies – dolls with comical expressions – the Magna Carta – a foot spa – Cluedo – a yellow fort!”
“Where are the beds?”
“Well, I couldn’t fit everything in. There had to be sacrifices.”

Early in last year’s Christmas special, the Caretaker (the Doctor [Matt Smith]) introduces a war-torn, forlorn family to Uncle Digby’s house big old house, with its faulty door, less boring than it used to be smaller sitting room, triple-tippled-tapped kitchen, faulty stairs, possible panthers, boring Mum’s bedroom and, most importantly, the children’s room. It makes me laugh. Matt’s Doctor is just so infectiously Doctorish that I love this even with the words science-wiencey. And it’s good to know that, after having such fun decorating himself – fezzes are cool – he can apply himself to decorate something smaller, too.

How could I let Christmas pass by without the Doctor (William Hartnell) in the first of all his Christmas specials? In the middle of a massive Dalek epic, he takes the time out for – well, for all sorts of fun, but at the end of this episode, a drink. Come to think of it, last night I was listening to the series’ other great Dalek epic, The Evil of the Daleks, in which the Doctor takes a quiet moment for a not even festive drink (probably more wine, though it might be a brandy balloon) and tries to force it on someone who’s suspiciously more than teetotal. Then, infamously, he has more wine in the next Dalek story and his next body. Perhaps they drive him to drink? Back here, for once, it’s his own bottle, probably, with which he joyously toasts his companions before turning to the rest of us:

“And incidentally, a happy Christmas to all of you at home!”

And a very happy birthday to Sir Bernard of Cribbins next Saturday, too. But Wilf’s not in that one – so who is?

Next Time… The year ends with a bang.