Doctor Who 50 Great Scenes – 47: The Rescue – The Powerful Enemy

Counting down towards the fiftieth birthday of Doctor Who with Fifty great scenes… It’s my first choice of the fiftieth anniversary year itself, so it’s back to the beginning: today, William Hartnell would have been 105 years old. The Doctor – the original, you might say, and over the years he’s become my favourite. The Rescue is a great place to start for Mr Hartnell, a short adventure that nevertheless showcases his versatility – stern, kindly, vulnerable, intelligent, embarrassed, and often funny here, too. 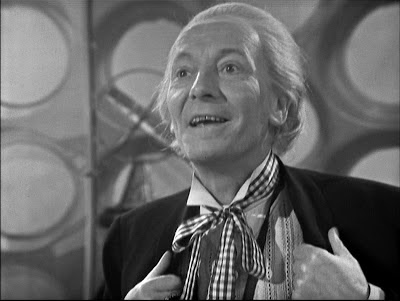 Doctor Who 50 – The Rescue
People often dismiss the youngest Doctor (William Hartnell) – the one looking like the oldest man – as a grumpy old thing, not least because when we first see him he’s terrific but not kind in running rings round his companions and takes a while to warm. Yet Mr Hartnell was an amazingly versatile actor and I can’t think of another Doctor with more facets. First broadcast at New Year 1965, The Rescue is in effect Doctor Who’s first relaunch, and some say it softens the Doctor’s character: well, only up to a point. What it really does, as a small character piece, is introduce a companion and reintroduce the Doctor by giving Billy a chance to shine in many different ways, not least as the only person who sees everything that’s going on in the story. And he’s fantastic.

I love Billy for his speeches and his passion, and there’s plenty of that here – at the climax of the story, he follows his previous ‘courtroom’ triumphs with a stunning confrontation in an awesome Hall of Judgement. He charms budding companion Vicki with his understanding when his other friends have been winding her up, then is chuffed to bits overhearing what she thinks of him, and at last, eyes full of wonder, promises her friendship and an abundance of adventure. He promises her he’ll be diplomatic… Which last about ten seconds before – though he’s the last Doctor of whom you’d expect it – he picks up a girder to use as a battering ram and determines on breaking a door down. William Hartnell turned presence learned as the stern sergeants and ruthless crooks of his film career into the perversely authoritative anti-establishment Doctor… But he was also a fine comic actor, as previously seen when the Doctor erupts in inappropriate giggles in Marco Polo, or coming in a string of comedy moments in the next story, The Romans (in a double-DVD set with The Rescue which ought to be called, but which you won’t find labelled as, ‘Veni, Vidi, Vicki’). And my favourite scene in The Rescue perfectly displays two of the elements of this Doctor that are most often forgotten: his talent for comedy, and his vulnerability…

The TARDIS has arrived on an alien world, literally a beacon of light in the dark, and on board the Doctor’s companions Barbara and Ian are a little worried: she’s noticed that the vibration of flight has ceased, and that means that for the first time, the Doctor’s slept through a landing. They rouse him and he comes to, embarrassed but charmingly tactile with his friends, pretty much giving each of them a hug, so when Barbara breaks his flow to try and tell him what’s happened, he gets entirely the wrong end of the stick and clasps her hand to his breast in concern and relief that she’s getting over it. Then’s more embarrassed when he realises what she actually meant.

Well, it always tickles me, anyway. He’s never seemed more naturalistic and like a kindly old grandfather than here – and yet (another scene I featured in December) he’s just had to say goodbye to his Granddaughter, something that suddenly hits him, and hurts him, as he starts to ask her to open the doors and falters. Barbara helps him over his abrupt vulnerability with kindness; Ian thinks he’s lost it and takes the piss, only to get caught by the Doctor, still as sharp as ever. And we’re shown that not just in his comic upbraiding of Ian, but in the beginning of the Doctor as the man who’s been everywhere and can apply his experiences: he recognises the planet by its smell, and when Ian encounters a threat, the Doctor knows more about it than his exasperated friend telling the tale (with more comic business in wondering if he can get away with pretending he landed there deliberately before remembering that he did it in his sleep, playfully undercutting the danger of his becoming a know-it-all). And that experience – and his continuing willingness to get stuck in – is crucial to the story… For all that the Doctor might seem very different at a glance today, watch a bit of The Rescue and you’ll realise exactly where he comes from.

Oh, and should you buy The Rescue / The Romans on DVD – you should – even more than for most of the range, hit “Play All” before you watch the menus. Many of the Doctor Who DVD menus conspire to pack as many spoilers into as few seconds as possible, but the clips played across the Special Features menu here win a special ‘What were they thinking?!’ prize. Watch this story without spoilers.

As if to prove that the Doctor – and the TARDIS – could seem almost unrecognisable after so long, here’s a jump from less than two years into the series to less than two years away from its Fiftieth Anniversary. In The Rescue, the Doctor was deep in the arms of Morpheus; now he’s written by Neil Gaiman. Here’s the Doctor (Matt Smith), excited then hurt and vulnerable; here’s an alien planet in the dark; here’s the TARDIS, in a junkyard. Completely different, then. All right, so the TARDIS looks a bit different this week: she’s a mad woman out of her box, and even the Doctor takes a minute to recognise her as the one who wanted to see the universe, stole a Time Lord and ran away.


Next Time… Time for a scary bit – the skull beneath the skin.