It’s about time. Forty-nine weeks from today will be the fiftieth birthday of Doctor Who, the greatest TV series ever made. Starting today, every Saturday I’m counting down fifty great scenes – and where else to start but the Doctor? Plus something else you might think of when you mention him… So I’ve chosen one word that may just sum each of them up. Tonight, eleven Doctors (though one in particular) and a great many monsters (though one in particular). And if you know nothing about Doctor Who (why? How?), where to start. 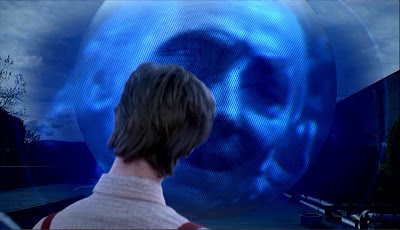 Doctor Who 50 – The Eleventh Hour
Matt Smith’s time as the Doctor started, appropriately, in 2010’s The Eleventh Hour. The alien Atraxi have come to Earth to find a criminal, then threatened to blow it up (with all its non-criminals). The Doctor thinks this is a bit rude, and – so they don’t come back – gives them a dressing-down. First, he does some dressing down and up of his own: he pleases some fans by taking all his clothes off; he pleases many more by putting a bow tie on. And then he’s ready to face the threat to Earth, getting them to realise through the medium of clips show that they’re not the first, and to see what happened to the rest. Giant holograms of the Doctor (William Hartnell, Patrick Troughton, Jon Pertwee, Tom Baker, Peter Davison, Colin Baker, Sylvester McCoy, Paul McGann, Christopher Eccleston, David Tennant) flicker in front of the Atraxi, the Doctor (Matt Smith) stepping through at the last, in person, to introduce himself and warn them off Earth. They get the message.

Though often packed with textual references, Doctor Who has largely been wary of displaying actual clips of itself throughout its long TV history (and, as I explained last week, I’m forced only to select from the TV series for my Fifty). Even with the vast majority of adventures now available on DVD, I still get a little thrill when such kisses to the past unexpectedly appear – first this century in, according to taste, the stories Last of the Time Lords or The Next Doctor, and the past most lovingly snogged in The Sarah Jane Adventures – Death of the Doctor. There’s something special about this one, though, joyously and powerfully reminding us of all the Doctors before the latest steps out on his own, each of the others backing him, to the triumphant strains of Murray’s Gold’s hummable if bombastic theme for the eleventh Doctor, I Am the Doctor (Every Star, Every Planet).

There’s something strange about this scene for Doctor Who, though. It’s the reverse of what you normally get – because, usually, it’s the Doctor who tells the goodies to run from the monsters until he can work out a way of stopping them. When the series magnificently returned in 2005, the first thing the dangerous new Doctor said to Rose after introducing himself was “Run for your life”; the most famous line of the first ‘new’ Doctor is “When I say run, run”; the very first time we meet the Doctor, he’s on the run from his own people (that’s how it all started). And when what looked like a monster momentarily entered the TARDIS, why did the Doctor’s apprentice Romana instinctively trust him? “Because he was running.” Doctor Who is on the side of those in flight from something nasty.

I’m not a huge fan of the ‘Don’t you know who I am?’ style of plot resolution, then, but if ever the Doctor’s earned a moment to trade on his reputation it’s in celebration as a new one is showing both us and the monsters that he’s the same man – and it helps, too, that doing this again at the end of that season comes back to bite him on the bum (after a splendid if hubristic speech at Stonehenge which Matt Smith delivers almost as thrillingly as the Sylvester McCoy original). And if you want another reason to cheer Great Scene Number 50, in these days when every new monster is an actor with make-up so intricate, mobile and marvellous to act through that they simply look human unless you look hard, the Atraxi suffer from no such condition. Hurrah for a giant flying crystal fried-egg eyeball jellyfish!


Bonus Great Doctor Who Quotation – Genesis of the Daleks (and on, across all time and space)

Every week I’ll also have a bonus quotation from across the fifty years of Doctor Who, which’ll mainly speak for itself. The first one’s different to all the others: it’s the shortest ‘line of dialogue’ I’ll feature, but surely the most often delivered and the most evocative; and, appropriately for just one word, this will be by far the longest entry for a bonus quote!

The Doctor – and the Daleks. It’s the first thing you think of when you think of the other. And the sound of the Daleks is inextricably bound up with what they look like and what they do, metallic, grating, but not robotic – full of hate. One word, so many associations, from the silence of space to shrieking cacophony… Whenever I hear it, I can see them. Perhaps it conjures up the same sort of visions for you, the most visual Dalek adventures mixing with the most memorable uses of the word: And there’s still more than one memorable variant of that same word coming up over the Fifty…


If you’re not familiar with Doctor Who… Well, watch one of them, and any of the stories I mention in my Fifty would be a good start. Or you can read So Who is This Doctor Bloke Anyway? – my short and simple and did I mention surprisingly short? guide to the basics of what you need to know. Which, it turns out, isn’t very much, and I reckon I’ve picked the important bit (and answered a handful of follow-up questions you might have). Alternatively, long ago writer Terrance Dicks wrote a description of the Doctor which many think still holds good today.

Today is, auspiciously, the thirty-ninth anniversary of the first appearance of the wonderful Sarah Jane Smith in Doctor Who; tomorrow would have been the birthday of the lovely Nick Courtney, most famous for playing the Brigadier; each has a good claim to being, quite simply, the Doctor’s best friend. As the Fifty unfold across the next year, there’ll be something for each of them…

Comments:
This was a great read! Do we have to guess next week's scene from the clue 'It's Christmas', though? Surely it has to be something from The Feast of Stephen...?

I enjoyed writing it... The quote and the scene won't always be so tied together. Though they may be next week too (and something will, indeed, be from The Feast of Steven [I think the V, punningly).

Thank you for having a guess, too! Does anyone else want to have a try? I shall enter you on my big scorecard to see who wins the prize next November...