Counting down on every Saturday* towards the fiftieth birthday of Doctor Who with Fifty great scenes… Tonight showcases another of the series’ defining features, with the scariest sequence from one of Doctor Who’s scariest stories. Image of the Fendahl stars the iconic team of the man in the scarf and the woman in the leather bikini and guest-stars the fabulous Wanda Ventham in a role building on those she and others took for Hammer and Tigon Films. For this triple-cliffhanger, night has fallen, and the only light is something you don’t want to see…


“Apparently it only works after dark.” 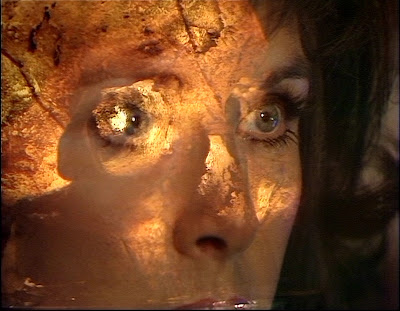 Doctor Who 50 – Image of the Fendahl
Image of the Fendahl was first broadcast over Halloween 1977, and – filmed largely at night, the action taking place largely on three nights with only fleeting snatches of day between them – still seems like the perfect Halloween story. Which might be a gag, as the script sets it at Lammas, the height of Summer (though there is maybe a reason for that, as I mention when reviewing a bit more of Image of the Fendahl). I said when I offered Eleven Great Cliffhangers in the run-up to the Fifty that there’d be more to come of those scary bits that get you coming back next week, and here’s the first of them – one that made a big impact on me as a boy. I was just turning six back then, and after nearly three years that had had me peeking, petrified but compelled, through the crack of the door this was effectively the last adventure in ‘Doctor Who – The Scary Years’. It’s one of three or four stories that might be the scariest of the lot for me, and Part One is its most brilliantly crafted stretch of horror, peaking in its cliffhanger ending.

The episode opens with a group of scientists working together on a project that somehow takes in everything from a human skull eight million years older than humanity to a mysterious hi-tech scanner and a hole in time. And the most obviously sensible, practical and technically competent of the team is Wanda Ventham’s Thea Ransome, who gets on with doing her job like a real person while the men establish themselves as the bitchy one, the sinister one, and the even more sinister one. I like her, and I’ve always liked Wanda – as did producers, who made her almost the only glamorous ’60s actress to get sex symbol roles while never being a stick insect. In dark wig and lab coat, she’s in a down-to-earth role here, her first after having her son (who’s now almost as impressive an actor as his mum but, strangely, turned out quite thin and more striking-looking than sexy, though I understand Benedict Cumberbatch does have a following). Clearly, she’s going to be the sensible one who helps the Doctor while we play ‘Spot the madman’ among her fellows. And that’s merely the first of many reversals of expectations (“This is not how it should be!”) that Image of the Fendahl is going to play on the audience…

Because not three minutes into the episode, the mysterious scanner is whining and throbbing as the two ostentatiously sinister blokes power it up, while in another part of the mansion the cracked, ancient skull starts to glow in pulsing time with the throb, giving it an unpleasantly organic appearance… And much more so as we see the skull and Thea’s suddenly-blank face merging in and out of each other, while out in the dark woods a hiker (not, in fact, Simon Williams, much as it looks like a famous cameo) is stalked by something horrible and finds himself rooted to the spot when he tries to run. The sound design, the eerie lighting in the night and the wordless cross-fading between Thea and the skull make it a hugely effective sequence – but it’s only an apéritif for the still more involved and tensely inter-cut build-up to the cliffhanger at the other end of Part One. Across the next day, the scientists find a dissolving corpse in the woods, we meet a cantankerous old cook from To The Manor Born and a private security guard from EastEnders, and the TARDIS lands, bringing the Doctor (Tom Baker) and Leela (Louise Jameson) in search of a threat to the World. Unfortunately, by the time they’re creeping round behind the big old house, night’s fallen again and Thea, intrigued, has gone to take a look at the mysterious scanner. This isn’t going to end well. But, as we’re headed to a cliffhanger, that means it’s going to end brilliantly.

Alone in the secret lab, Thea switches on the ‘Time Scanner’…

On the other side of the mansion, the darkened Palaeontology lab is suddenly lit by the glowing skull…

In the woods, Leela slips from the Doctor’s side to investigate a hooded figure stalking through the mist…

Thea stares blankly ahead, her hand operating the machine as something else operates her…

Leela follows the figure to a cottage, where it’s lying in wait with a shotgun and lets off both barrels…

And the Doctor stands, rigid, as something wicked approaches, the camera and us watching from its point of view, the Doctor’s frozen face an eerily blank echo of the opening titles as we slowly zoom towards him and into the scream of the closing music.

It’s hard to match the building terror of those last three minutes, with the voyeuristic camerawork in the dark and the horrible slobbering sound and eerie mechanical throb perfectly marrying technology and ancient horror. And there’s still the apotheosis of that most Doctor Who of all forms of death – when someone dies only to rise, hideously transformed – to come.


My brilliant Richard observes that my response to this is visceral rather than analytical, which mirrors what happens in the scene: it takes the rational scientist, Thea, and the instrument of inquiry, the scanner, and by-passes their purpose to pour horror straight through.

“Well, it’s just possible that you’ve been given a series of orders while you’ve been asleep. You know – ‘do this’, ‘do that’, ‘do the other thing’… My advice to you is: don’t do anything of the sort! Don’t just be obedient. Always make up your own mind.”

Arriving on an all-too friendly planet run like a holiday camp, the Doctor (Patrick Troughton) and his friends are given a great welcome. As long as they don’t ask any awkward questions. As long as they pull their weight. As long as they do as they’re told. In one of his most brilliant and most characteristically Liberal adventures, the Doctor senses an insidious influence while they’re sleeping. He blows a fuse. Then he goes into his friend Polly’s room and blows hers. And just wait until he gets into the boys’ bedroom…


Next Time… Right back to where I started, celebrating a birthday, an anniversary, a fabulous team, and more good advice to adults and children alike.


*Yes, I know this one’s a week late (having been more ill than usual), but at least it’s a Saturday. I hope to catch up before next week…

Comments:
I can't believe that “Apparently it only works after dark" is an actual quote. Fantastic!

I've only seen this once but it was recently, and I adored it (apart from the ending, but I rarely enjoy endings). You've made me want to watch it again.

Back to where you started? Not the Eleventh Hour with a 'fabulous team'. An anniversary - could Pertwee and Troughton be the fabulous team?

It is - I cheated, slightly, as it's Adam in the run-up, just before Thea goes off to the lab. But I always watch at least the scenes around the one I'm writing about, and that especially delighted me, too.

I adore it all bar the coda in the TARDIS console room, where I think everyone goes off the boil...

And thank you for guessing. Afraid not, though! You might take a look at my previous post. And the one before. Between them, they constitute A Big Clue.

I think my mention of the anniversary might have been misleading. There might be a scene with Pertwee and Troughton coming up later, though; I'd set the whole Fifty by the end of November, but there's one that's been nagging at me, so I'm thinking of dropping another scene in its favour... But that's some way off!