Dip Me in Gaiety and Throw Me To the Creationists

As the year closes, it seems appropriate to give a last hurrah to two great figures whose bicentennials have been celebrated in 2009: Charles Darwin, who changed the way we think about ourselves and opened the world to the wonders of evolution (and whose On the Origin of Species had its own one hundred and fiftieth anniversary); and William Ewart Gladstone, the Grand Old Man of British Liberalism, probably Britain’s greatest ever Prime Minister as well as perhaps the greatest polymath and possibly even the most insufferable human being – though with far greater competition – to hold that office.

People have written an enormous amount this year about Darwin and his work, and I’m not going to replicate it all. Not least because, like many other days this year, I’m tired, ill and grumpy, and I want to be nice to Richard before it turns midnight.

But I will say this. The theory of evolution is one of the greatest discoveries in human history. It’s sad that increasingly vociferous nutters still do their best to disbelieve all the evidence, but shocking that they pour money into teaching kids to stick their fingers in their ears and stop thinking. I’m aghast that these theocratic maniacs who think they know everything – and that everything was already known thousands of years ago – have been allowed by the Labour Government to peddle their lies in schools. And David Cameron’s wish to peddle out public services to dodgy “faith-based” clubs fills me with no more confidence. Schools should be places of enquiry; teaching the scientific method is teaching to question, and to look for evidence. Though polling evidence on how much the British public trust the evidence splits, as everything does, on how you ask the question (oh no! It’s a disaster! Oh, phew! It’s quite promising, except in the USA!), I know whose arguments I find more convincing: David Attenborough, or Sarah Palin? 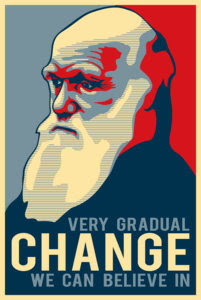 I’ll leave you with the above poster via Paul Belford, and many wise words from a certain elephant with a much better grasp of the science than I have.

When the rather fabulous Victorian werewolf story Tooth and Claw first aired as part of Doctor Who’s 2006 season, one of the many reasons I enjoyed it was that, contrary to my fears, Queen Victoria turned out to be a complete git. I’d recently read Roy Jenkins’ superb and startlingly readable biography of Mr Gladstone, and had strongly come to that conclusion about her myself; she didn’t like Mr Gladstone, understandably, but went to great lengths to frustrate him, undemocratically. She wasn’t a great one for listening to the People’s Will.

That’s probably Mr Gladstone’s best-known quotation, which I’ve seen recorded in several slightly different forms (for example, via the lovely Stephen Glenn) – I suspect the answer is that he uttered it several times. Despite Mr Gladstone being famous for his six-hour Budget speeches, I used the above version as one of a series of potential Tweets on what the Liberal Democrats stand for. Appropriately enough, I took it from the 1885 publication Why I Am A Liberal, via 1996’s Why I Am A Liberal Democrat. Perhaps more endearing is his account of his own personal evolution:

“I was brought up to hate and fear liberty. I came to love it. That is the secret of my whole career.”

I suspect that, were he Liberal Democrat Leader today, I’d be in constant conflict with him – though you never can tell, as not only did he believe in all his points of view with a zealous passion, he frequently changed them. It’s a sign of thinking about things that I can’t help admiring, though sometimes he’d think about them in public at such length that it makes me seem like I only ever communicate in txt spk. As his wife Catherine once put it:

“Oh, William dear, if you weren’t such a great man you would be a terrible bore.”

Mr Gladstone was born two hundred years ago this week, so here are a few of the best commemorations. Stephen Glenn refers us to several of his H2G2 articles; the marvellous Helen Duffett brings us the tail-end of the great man’s voice; and the Guardian an unusually to the point “In Praise of…” and a special comment piece. The most startling paeans, however, were found by Paul Walter in those most deeply Conservative periodicals, the Daily Mail – the paper that spits on dead people and refuses to apologise – and the Daily Torygraph. Like so many churches now shyly acceding to Darwin’s discoveries, it seems it takes a hundred years for Tory newspapers to recognise that Liberalism was the right choice after all.

My Night With Creationists (With Hilarious Results)

Finally, I thought you might be intrigued to learn that, despite going to a state-funded Catholic primary school, secondary school and sixth-form college, and attending two different churches – Catholic and Baptist – every Sunday until I was eighteen, and knowing much of the Bible very well indeed, picturebook-friendly Genesis more than most, I grew up not doubting for a moment that, with so much evidence in front of me, the theory of evolution was simply factual.

In part, I’m sure this was because I had two very religious and highly intelligent parents (my Dad in particular with an interest in science, having been a librarian back then and today working at Jodrell Bank). In part, it was that evolution was certainly presented as scientific fact even as early as primary school. And in part, of course, I learned to read on all those marvellous Target Doctor Who books, and Doctor Who and the Cave-Monsters in particular made it very clear that the Earth had been around for a while, and humanity considerably less so. Later evolutionary fables Full Circle and Ghost Light were even clearer: there might have been old religious authorities that were blind to the truth back in the past sometime, but like any species that couldn’t adapt, they’d long since died out.

Now, bear in mind that at the time I was less familiar with US politics than I am now, and that the religious right was both less powerful and less barking mad – and that the idea of theocratic millionaire ideologues being able to take state funding to indoctrinate children in any old shit was something not even Mrs Thatcher was backing.

So how was it that I came by the revelation that creationists were still going in the UK?

Hilariously, it was only when I went for a university interview that this ever came up. Being quite some way away, they’d put me up for the night with three other young men come for interview, and in the dorm room that night the four of us got talking. I can’t remember how the subject came up, but it turned out that not one but two of the others – all four of us from very different places – were of the creationist view. You wait eighteen years for a loony, then two of them come along at once. You may not be surprised to learn that we didn’t exactly get on. You may be more surprised to find out just what I did that really, really wound them up.

I roared. I pissed myself. Given all my life history thus far, I immediately leapt to the only plausible conclusion: it was a practical joke. They’d met up earlier that day and decided on a prank together, like university students are expected to do. And, of course, the longer I treated them as if they were trying to pull my leg in the most absurd way, the more furious they became, because they thought I was mocking their most deeply held beliefs. Which I was, of course, but only because I didn’t realise anyone could possibly still be that stupid in the late Twentieth Century, and that it must be a wind-up.

As I was a little over a year into being quite politically motivated and out, too, I then mentioned that I was gay at an appropriate point in the conversation. Of course, they immediately assumed that I was now pulling their legs, as they’d never (cough – bollocks) met any who was gay before and, obviously, it was exactly what I’d be expected to do on thinking they’d been taking the piss. It didn’t help my credibility that I laughed all the more at their reactions to my latest challenge to their worldview, but once they started believing me, the real arguments started. Ahhh, to this day it’s still my second-favourite coming out in bed.

The fourth guy in the dorm literally just kept his head down. Under his pillow, in fact, by the end of it. Or maybe he wanted to get some sleep before his interview for some bizarre reason.

Once I got back up north to my parents, I remember relating this story in tones of sheer incredulity, and being told in an embarrassed way by my Dad that there were a handful of people at Church he thought were probably creationists, but they didn’t talk about it. Oh well. Look, they hadn’t done any damage to me, so that was all right.

Of course, Stockport Baptist Church then turned out to have a pretty major problem with my sexuality too, but that’s another story…