Doctor Who Anniversary Special – An Interview With Martha Jones


Originally published in Wonderful Books’ The Doctor Who 8th Anniversary Special… To celebrate the tenth anniversary of Doctor Who’s return to our screens, and today the eighth anniversary of her first appearance in Smith and Jones, here’s my interview with the Doctor’s friend Martha Jones: 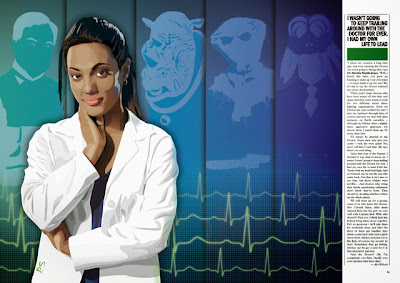 “I LEFT THE TARDIS WITH MY HEAD HELD HIGH!”

“I chose my vocation a long time ago, and even meeting the Doctor was never going to change that,” says Dr Martha Smith-Jones. “With a family like mine, you grew up learning to make your own mind up – or Mum made it up for you! But the Doctor certainly widened my career development, it’s fair to say.

“There aren’t many doctors who’ve been swept off into time and space and then come home to work for two different secret alien-fighting organisations. Even the Doctor’s only worked for one! I met my husband through him, of course, and now we deal with them ourselves. Though my Mickey has a slightly more aggressive approach. He shoots, I patch them up. Or him, more often.

“I’ll always be grateful to the Doctor. Some men only give you crabs – well, his were giant! No, no, don’t tell him I said that. He says they’re no such thing.

“After that year of the Master I just decided it was time to move on. I mean, I wasn’t going to keep trailing around with the Doctor for ever. I had my own life to lead. I left the TARDIS with my head held high! Of course, he was the one who came back. Not that it’s not nice to see him, but those Daleks were terrible… And doctors who wring their hands questioning euthanasia don’t know they’re born. They should try deciding whether to blow up the whole planet.

“We still meet up for a gossip, some of us who knew the Doctor. Not Colonel Mace, after Mum slapped him, but she gets on very well with Jack. Well, who doesn’t? Dad, too. I think he’s helped bring them closer. He’s so generous – he’ll take them for weekends away, and after the three of them get together they always come back with such a glow. Mickey pretends not to like him, of course, but secretly he does. Sometimes they go fishing. Mickey says he got a taste for it in that alternative Universe.

“And the Doctor? Oh, I’m completely over him. Hardly ever even mention him these days.” 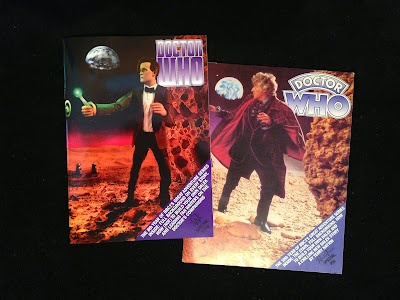 Matt’s Wonderful (and Jon’s Special Too)

Paul Smith has produced a fabulous array of Doctor Who publications, which you can find out more about at Wonderful Books (there’s a new one out this week). All of them look gorgeous and are immensely readable, but only some are completely factual – and I have to admit, the ones that most appeal to me are those with the most unfactual ‘facts’, the ones that are both deeply loving and taking the piss outrageously.

My Wonderful Books favourite is the one he didn’t write all himself, though it’s not because I’m one of the contributors. I’ve rhapsodised before about the Radio Times Doctor Who Tenth Anniversary Special, a treasured and tattered possession passed on to me when I was a boy and still perhaps the most thrilling Doctor Who magazine ever published. Before websites or guidebooks, this was the unique source of thrilling photos and details of stories all from before I started watching (that is, prehistory). So I was utterly thrilled when Paul asked me out of the blue to write a piece for his version in the fiftieth anniversary year.

Paul’s concept was to give it a similar feel and length to the original Radio Times Doctor Who Tenth Anniversary Special by recreating it as if celebrating not the fiftieth but the eighth anniversary of a Doctor Who series that started for the first time in 2005. And to give it the range of voices of the original’s interviews, he approached other fans to provide some of the artwork and comment pieces.

In the 1973 Special, double-page spreads about past stories alternated with newly shot double-page photo spreads and interview columns for past companions with pull-out quote headlines like “THE NUTCASE PROFESSOR SWEPT ME OFF MY FEET”. For a column like that, I was given only 350 words to play with – imagine – and a couple of other rules which I contrived to bend subtly (such as the ban on alluding to pre-2005 Who). I was asked which companion I’d like to write about, and though several tempted me – Rose and Jack were terrific in 2005, and I loved Jackie and Wilf – I instantly thought of Martha Jones, or rather Martha Smith-Jones as she is now. Had I written Mickey and Martha as a pair, obviously, he’d have mentioned Rose in every paragraph before saying he was completely over her (and had I written for Rory, it would have been a one-joke piece where he dies at the end of each paragraph and then gets better). 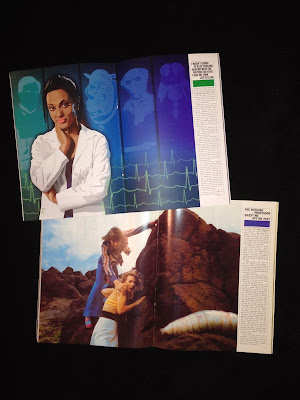 Martha Jones Vs Jo Jones
From her first appearance in Smith and Jones, eight years ago today – making it the most appropriate day to publish my own piece from the 8th Anniversary Special – Martha was a breath of fresh air for me. It wasn’t just Freema Agyeman’s performance and giving as good as she got to the Doctor (and him not being interested), nor just that she was the Doctor’s first full-time TV companion who was black (after Sharon, Roz and others elsewhere), but that she wasn’t going off with the Doctor only because her life was a bit rubbish. Martha is the only TV companion since Sarah Jane Smith with a decent, fulfilling, even exciting career – and for all of us who are so utterly gripped by the Doctor and his adventures, that’s a more inspiring example than the implicit suggestion that travelling in the TARDIS is only slightly better than being in a dead-end job you’re bored by or hate, or than having your parents killed in front of you (and going off with the first available surrogate dad). If you’re an achiever with a lot to give up, but the TARDIS is still so exciting you’d go off in it without a second thought – well, you would, wouldn’t you? And, for me, she has by far the most satisfying (and self-chosen) exit from the new TARDIS, too, again after impressive achievements in her own right.

Other contributors took their own approaches, writing critical assessments or celebrations of their chosen characters, but with the Radio Times Special so deeply ingrained in me, I knew immediately that I wanted to write an ‘After the Doctor’ interview in that style, for the character rather than the actor, and that though I was going to be tongue-in-cheek in several ways (her earnestness, the Doctor) as well, I was going to set out first to say ‘She’s a strong, brilliant character’. And while it may have taken some time to think of all the other words, then edit them all back down again, my starting point leapt into my head fully-formed on reading Paul’s initial email to me:

“I LEFT THE TARDIS WITH MY HEAD HELD HIGH.”

Though, as you can see from the interview as published, Paul picked a different pull-out quote, though with a very similar feel. 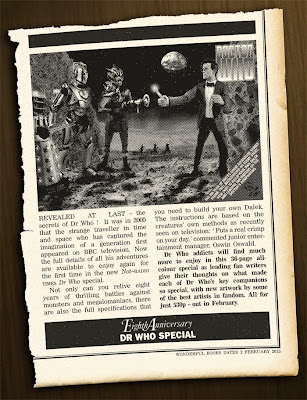 Doctor Who Anniversary Special Ad
As it turned out, Paul’s wickedly pointed ‘story summaries’ didn’t mention Martha at all, so mine was the only piece that featured her in the whole magazine, and I’m very happy to have done her justice (if thankfully not in an entirely strait-laced way). Happy anniversary, new Who and Martha Jones!