One newcomer writes mad messiah murder mystery The Robots of Death and the series’ finest ghost story, Image of the Fendahl; others include the woman in the leather bikini and the tin dog, who with the bloke in the scarf become Doctor Who’s most iconic silhouettes… I learn to read on books like The Dalek Invasion of Earth and the horror-and-ellipses-packed The Ark In Space… While in Victorian London…

The Talons of Weng-Chiang

“On my oath! You wouldn’t want that served with onions – never seen anything like it in all my puff. Urrhh, make an ’orse sick, that would. Oh!”

‘Doctor Who in the inner city: gangs, guns, stabbings and drugs’. Hurrah! Feast on the richest of dialogue, fruitiest of characters and vilest of villains, with one whole episode a brilliant conjuring trick. It’s one of the most utterly entertaining pieces of television ever made.


Second-hand shopping might turn up a novel with an hilarious cleaning-up of an obvious on-screen prostitute, a script book, an edited video… But you want the double-disc DVD, one of the best releases going and with some superb extras. For some, the height would be the 26 minutes of Blue Peter teaching you how to make a model theatre with Lesley Judd, but for me it’s something amazing: a special behind-the-scenes documentary on Doctor Who, with loads of clips of old stories to pack it out, and all from 1977, a year that also saw complaints about the BBC, the economy going bust and Doctor Who being incredibly popular – how times change, eh?

But that’s not all. This year, my inner gleefully bloodthirsty five-year-old self was overjoyed to see that The Talons of Weng-Chiang has now also inspired the most unsuitable toys for children ever to hit the supermarkets (well, the Slitheen dress-up skin suit comes close, but it doesn’t come in Slitheen size for me to wear it). Nearly two decades ago, I saw a boy in a video shop trying to decide between this and a Who story I don’t think much of (I only write nice things in these posts, so I won’t name it); I knelt and convinced him that this story was dark and scary, then stood and convinced his mum that it was half as long again for the same price. These new figures are much the same. Tell parents that you get a full-sized figure and a half-sized figure for the same price as the other single figures; tell kids that you get a knife-wielding psychopathic doll and a sex killer war criminal with interchangeably masked and hideously scarred heads. As I said, a fabulously unsuitable toy purchase, which I recommend to every household this Christmas.

Some months ago, incidentally, I wrote of a faulty component on assembling my ‘collect and build’ K1 Giant Robot, part of which comes with the unbeatably unsuitable Magnus Greel and Mr Sin. I’m delighted to report that Character Options’ customer service team got back to me within a week, and not only replaced the faulty part but sent me a complete, fully assembled Robot (so I now have some spare arms and legs. Sigh. If only I did). Here it is, looming in the background of those two psychotic star figures and an assortment from 1975 and 1977. 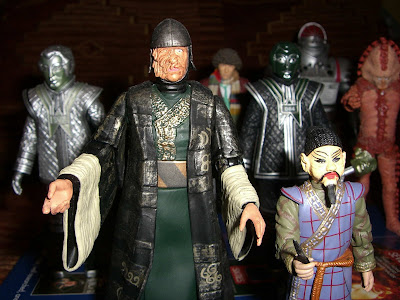 And finally… Eagle-eyed viewers may have spotted that my plan to write one of these every day through to the end of the year came to a grinding halt three weeks ago, when I got very ill for a week and very washed-out afterwards. Last week my embarrassing ailments scored a hit with a broken toe. Tonight, a little less grumpy, two toes strapped together and trying to catch up a bit, I’d like to say particular thank-yous to Neil Fawcett and the lovely Nick, who respectively posted an encouraging blog piece on why Doctor Who was brilliant in 1977 and wrote me a fantastic e-mail doing every year from 1963 to 2008 in one go. Both warmed the cockles of my heart, and both picked The Talons of Weng-Chiang as certainly as I did.

Comments:
I actually just read the novelisation of this for the first time last night (borrowed this, The Masque Of Mandragora, Earthshock and Day Of The Daleks from an old friend I visited who'd happened to find about thirty Targets at a second hand shop). It's... different... isn't it? ;)

Indeed! I loved it growing up – it tells the plot quite well, and has some nice turns of phrase – but the TV programme’s so many steps up (though, of the books you mention, I’d go for Day of the Daleks like a shot, which for me improves on the original)… You have to see it to get the atmosphere, the horror, the sense that they were doing a lot more than they could get away with, and above all how funny it is. The scene where Professor Litefoot has a culture clash with Leela over table manners, for example, is probably the scene that’s most made me laugh in the whole of Doctor Who.

Yeah, I thought Day Of The Daleks was the best of the bunch too. Earthshock was fun though just to see how many synonyms for 'said' Ian Marter could use on a page...

Oh, bollocks, now you've gone and made me want a model D84 that a minute ago I had no idea existed.

1977 was brilliant because I was born (Mat saw me typing this and told me to move over because my ego was taking up all the room in the bed LOL).

Still haven't got any of the doctors out of that set, but have all the monsters. I want a Sixie! I have told myself I'm not allowed to BUY one off ebay until I have sold some stuff, though. So the more I procrastinate, the more expensive they will get.

Ahh, Andrew, I used to avoid "said" in just the same way; to this day, Mr Marter's influence means I still use lots of ellipses (just open any of his books at random)...

((HUGS)) to Andy and to Jennie (which sounds fun). I only didn't put Sixie in the photo - a great figure - because he's a little late for the selection... Shop around, Andy, but if you take a look at my August post, of course, there's a 5% discount which is probably still going.

I went for Colin, the Zygon and Magnus and Sin first, btw. And the Daleks. Then the lot...

I'm just looking at the brightly coloured Colin up on my shelf and thinking (as well as 'why didn't I go to bed hours ago?'), truly, we live in a time of wonders. I never thought I'd see one! :D

You, me, and all the Sixfans on LJ. There was much squee thaqt he was not only made, but first wave...