Doctor Who 50 Great Scenes – 40: The Rebel Flesh / The Almost People


Counting down towards the fiftieth birthday of Doctor Who with Fifty great scenes… This one’s from 2011 and the Twenty-Second Century, and it’s one of my favourite moments for Matt Smith’s Doctor – an almost perfectly formed cliffhanger. So expect rather large spoilers, deep themes, and the enemy within…?


“This is insane. We’re fighting ourselves.”
“Yes, it’s insane, and it’s about to get even more insanerer. Is that a word? Show yourself, right now!”
“Doctor, we are trapped in here and Rory’s out there with them. Hello? We can’t get to the TARDIS and we can’t even leave the island!”
“Correct in every respect, Pond. It’s frightening, unexpected, frankly a total, utter splattering mess on the carpet, but I am certain, one hundred per cent certain, that we can work this out. Trust me. I’m the Doctor.” 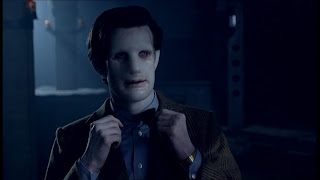 Doctor Who 50 – The Rebel Flesh: The Doctor
It’s the answer to accidents at work. Working in a dangerous environment? Worried you might fall into a pool of seething acid and bubble to a hideous dissolution? Robots too expensive and covered by pesky artificial intelligence regulations? Then meet the Flesh: reformable, reusable, disposable, and you. Just sit back in comfort and control your Flesh “Ganger” self through all the sticky bits, and if you’re a bit more careless than you would be with your usual body and it happens to die in screaming agony, just withdraw your consciousness from it and form another from the vat of gloop. It’s not as if anyone’s hurt, right? And if you get it wrong, you can just be born again. Again.

The Rebel Flesh / The Almost People is the 2011 Doctor Who story that felt most traditional to me – that is, of all the many, many thematic traditions of Doctor Who, this chimed with those that most deeply speak to me. Traditional, then, though not at all reassuring. The Flesh vat from which life can rise at will – eventually, its own, after a spark from the heavens – is only the font of the religious imagery, housed, of course, in the old Chapel. Free will and the created rebelling against the creator? Frankenstein is positively a modern influence in that context, here given a kick by a solar storm as its lightning. There are existential crises, cruelty begetting cruelty, conflicts between people who are basically (and never more so here) the same, all shot in dark, shadowy corridors. And with Matt Smith’s Doctor arriving to investigate and the actor’s love for Patrick Troughton’s time in the role, it’s not inappropriate that the story evolves into one of base under siege.

The cliffhanger brings all of this to a head in a way that’s predictable if you’ve been watching, yet deeply satisfying, a terrific ‘What’s going to happen next?’ moment of horror, revelation and just a little of challenging the viewer. On arrival, the Doctor (Matt Smith) scans the Flesh pool and finds himself disconcerted – as if it’s scanning him in return. It pulls his hand down to touch it, and they share a moment of understanding when

There’s no such awe for the creators. They simply don’t care. They pile their personalities and lives directly into it, yet they don’t expect it to be alive. Naturally, the Doctor’s feelings are with the exploited Flesh, urging one of the team whose face suddenly slides into incoherence – revealed as Ganger – to trust him, appealing to bridge the gap between natural and new human as the differences between the bodies and personalities of each become ever more indistinct, only for the ever-careless human team leader to do what she’s always done and ‘dispose’ of Gangers in her way… Prompting the Gangers to decide on the same strategy of “us or them”. Where once they touched, now he’s guilty by association of betrayal and death, how can even the Doctor become an intercessor between creators and created? Though, racing about the place as he does, he did pop back into the Chapel alone to scan – or prompt – the pool of Flesh once more, the vat forming lips in reaction, and practicing the words: “Trust me.”

Events approach crisis. The humans see the Gangers as nothing. The Flesh rebel. The TARDIS sinks beneath an acid mulch. The greatest solar storm of all is building to baptise all with fire. There’s a thrilling, throbbing, backwards pulse of music as people run down dark stone passageways. And a figure staggers from the vat, muttering “Trust me…” as its clammy hand holds itself up against the wall…

The TARDIS crew splits apart as Rory rushes out in concern for the team member-Ganger-person he’s been talking to – perhaps showing himself (while everyone here clearly passes the Turing Test) the only ‘human’ of either creation capable of passing a Voight-Kampff Test – while Amy’s left behind, fearing the unlike and the too-alike, shocked that Rory is with another woman. And the Doctor can’t hold her together now, because he’s heard a voice from the shadows of the Chapel, asking “Why?” “Show yourself!” the Doctor commands, but whose self is it (and hasn’t a son of the Doctor asked “Why?” before)? His face the bloated Flesh of a not-quite-controlled Ganger, the Doctor (Matt Smith) steps forward to reassure Amy just as he always does, characteristically straightening his bow tie and giving that crooked smile. Trust him. He’s the Doctor.

I did warn you there were spoilers, didn’t I? 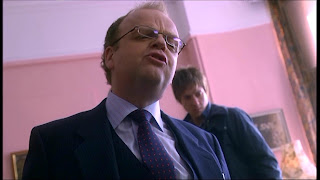 Doctor Who 50 – Amy’s Choice: The Doctor
In this especially fine sci-fi short story of a Doctor Who episode, the Doctor (Toby Jones) is much less friendly an other Doctor than the Doctor (Matt Smith) above is going to be to the Doctor (Matt Smith). Introducing himself as “the Dream Lord”, he flits between the Doctor, Amy and Rory’s confusing, conflicting realities of the happy, domestic life that Rory’s always wanted, settled as a doctor, or of the scary, exciting life in the TARDIS, settled with the Doctor. He tells them to pick the real one, or die. But which is Amy’s dream outcome? And what a sly other self the Doctor has – where Rory dreams of at last drawing equal as a proper doctor, this one promotes himself to Consultant to put him down again:

Toby Jones is deliciously bitchy as he sneers that he could always see through the Doctor; Matt Smith matches him secret smile for secret smile, knowing only one person could hate him that much. But is he a person in his own right, like both Doctors above? I think Richard’s talked me round, in his review for Millennium’s Fluffy Diary. And what about the next one…?

This is arguably the best Doctor Who story since it returned to TV in 2005, but not for John Smith (David Tennant). He spends the first half of it happy with his life as a teacher, his burgeoning relationship with Joan the Matron, and his exciting dreams of adventure, though his faithful maid Martha seems to be getting a little strange. But in his Journal of Impossible Things we see for the first time all his past selves, and everything turns inside-out when he finds those dreams are real and his life’s become a nightmare. The local dance ends in death. People he thought he knew become an uncanny Family led by a pupil with wild eyes now styling himself Son of Mine, and they want something from him he doesn’t know he has. Martha’s become an unsettling mixture of protector and threat, and she, too, wants something from him he doesn’t know he has. To him, he’s an ordinary man, with unreliable memories but real feelings. To both pursuers and protector, he’s a walking placeholder, not the Doctor but just an inferior mind and body walking around in exactly the form and place the Doctor would usually occupy, all of them for different reasons looking forward to his erasure. He despairs that even the woman he hoped to marry thinks he’s not enough – though she’s the only person who sees him for who he feels he is. At the story’s half-way point, as people suddenly demand the Doctor of him, there’s a “Next Time…” trailer in which he declares “I am not the Doctor.” It’s a sign of how little control he has of his life that he doesn’t get to say that in the second episode – even his denial just gets written out. And yet his plight prefigures not only the sinister echoes of his role (and Martha’s) in the three-part season finale, but the existential crises and self-loathing of the other Doctors above. 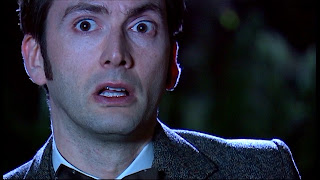 Doctor Who 50 – Human Nature: Not the Doctor
John Smith runs from the Family, but they call him back, holding the TARDIS the Doctor loves as hostage. Martha loves the Doctor and tries to wake him into his dream to save them – and doom him. Joan loves John Smith and tries to reassure – but can’t lie to him. And poor John breaks under the responsibility all of them put on his human shoulders.

And there might just be more dodgy Doctors to come (though another, much as I enjoy this scene half-way down, doesn’t quite make the Fifty). The next scene up’s not just a but the man who is not the Doctor, though…


Next Time… Hiding behind… Oh, no, hiding from…