Counting down towards the fiftieth birthday of Doctor Who with Fifty great scenes… This one’s from 1980, towards the end of three years starring Tom Baker, K9 and Romana. It’s a brilliantly designed, directed and scripted story, a fiercely intelligent evolutionary fable. The allegory of ‘revealed truth’ versus awkward questions and the morality of siding with the underdog are close to my heart. But for all the great dialogue, thought-provoking revelations and the Doctor’s moral passion, deep down the moment that most gets me is still the thrilling monster reveal. When Mistfall comes, the giants leave the swamp… 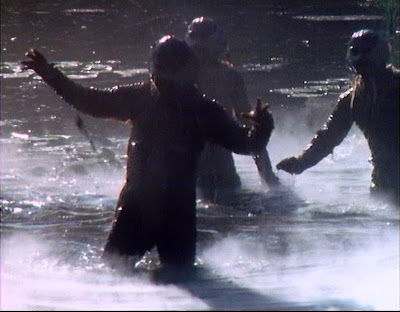 Doctor Who’s Eighteenth Season, broadcast from 1980 to 1981, has long been one of my favourites for its ideas and scientific fairy tales (in this case, great work from writer Andrew Smith and lead writer Christopher H Bidmead), as well as for suddenly stunning visuals and music. In the run-up to my Fifty, I selected Eleven Great Cliffhangers and wrote that this season has arguably Doctor Who’s most sustained run of terrific episode endings, with two stories in particular having outstanding cliffhangers every time. This is the other story for which that’s true: the climaxes to Parts Two and Three are brilliant as well, but you can’t beat a great monster moment.

Strange creatures rising from beneath the water are among Doctor Who’s most striking repeated cliffhanger images. First and perhaps most iconically, a Dalek emerging from the Thames in The Dalek Invasion of Earth; the Silurians’ amphibious cousins in The Sea Devils were excitingly captured for me in prose and photos on the page long before I saw their story; the Haemovores in the terrific The Curse of Fenric; if you’re unlucky, River Song. The Marshmen revealing themselves as they leave the water at the end of Full Circle Part One are for me the most memorable of the lot – perhaps because of the atmospheric direction, perhaps because of their monstrous design, perhaps because of the eerie spiralling music that accompanies them. Or perhaps simply because I was at the right age for this to be the first such scene I was able to see on TV.

For once, the sun came out for the location shoot, making the planet Alzarius seem much more alien – to British viewers – and the production much more lush. The Doctor’s vivid red outfit stands out so gorgeously against the vivid green that Richard Briers took this vibrantly exotic image for expensive tropical filming; the sudden murk of Mistfall becomes that much more of a contrast.

The citizens of the Starliner are used to gathering in food from around the great lake, but it’s the food itself that provides the first portent: strange tiny life growing within the marshfruit. Soon the lake itself is bubbling and something beneath the water is grabbing at the skinnydippers. Bearded patriarch Decider Draith announces the coming of Mistfall, the semicentennial Judgment Day during which his people are commanded to huddle within their centuries-broken spaceship, waiting for the deadly mists outside to pass over. Not all of these truths are true… And not everyone is following the commandments. Inquisitive strangers have arrived in a blue box from far further than the Starliner came before its crash on Alzarius, while teenage rebels define themselves by refusing shelter – “Outlers” – one of them even an Elite who ‘should’ be destined to be a Decider, Adric. Draith pursues his protégé, but rather than successfully bringing him back to the fold, the Decider is knocked into the lake and dragged under the water. Adric flees, taking with him Draith’s last warning, and collapses on running into the TARDIS. The Doctor (Tom Baker) and robot dog K9 (John Leeson) go out to the lake to investigate the legends…

The first major clue to the theme of the story – aside from Draith telling his head scientist that he has all the answers the other man seeks, but it would be blasphemy to divulge their ancestors’ secrets to him – is that after all we’ve heard about Mistfall, K9’s analysis instantly debunks it: the billowing fifty-year-recurring fog is non-toxic. So is this just propaganda to remind citizens never to stray from the Starliner? Or is there something else out there they shouldn’t mix with – and is it a physical, a moral or an existential threat?

As the Doctor kneels with K9 to study the marsh, the mist thickens and the lake heaves… K9 alerts the Doctor to potential danger, and the people of the marsh break the surface of the water, approaching the land. The slightly Creature From the Black Lagoon-ish Marshmen designs were one of the best-realised ‘monsters’ the series had created for some years, and Peter Grimwade’s direction gives them a magnificent introduction, swaying and dripping in slow motion in a great return to Doctor Who for scaring the kiddies.

The other contribution that really makes it for me is composer Paddy Kingsland, whose first full score for the series is a triumph, especially here when a spine-chilling motif builds the tension by circling higher and higher until the titles crash in to end the episode. The cliffhanger is cut at just the right moment to leave you wanting more, and if you follow through into the next episode, it offers more: rather than the howl of the Doctor Who Theme’s cliffhanger sting, as the Marshmen fully emerge from the swamp and stride onto land to open Part Two the eerie chiming music evolves into harsh electric guitar power chords for the developing peril.

As I’ve sometimes written, I enjoy film and TV scores but have no musical training and little musical vocabulary, which is why I think in metaphors such as “spiralling”; a person who does know a bit is John Toon, whose blog Doctor Who Electronica – 50 Scores in 50 Weeks for the 50th Anniversary is keeping up much better with its intentions than my own Fifty. He has this to say on that cliffhanger moment:

“A repeated seven note phrase plays over scenes that relate to Mistfall or that feature revelations about the Alzarian life cycle. The end of Part One, as the Marshmen emerge from the water, is a notable example. The notes rise and fall cyclically within the phrase, and the phrase itself rises across repetitions, as if emphasising the upward climb of Alzarius' super-evolving lifeforms. ‘The Ascent of Marshman’, we might call it.”

Bonus Great Doctor Who Quotation – The Power of Kroll

I wrote last time about the brilliance of Robert Holmes’ writing for Doctor Who. His last story in his ten years as a regular scriptwriter featured the same team of the Doctor, Romana and K9 – though a different Romana to the regenerated Time Lord seen in the other two stories I feature today. 1978’s The Power of Kroll doesn’t entirely play to Mr Holmes’ strengths: told to take out the jokes and put in a giant monster, he gives us an alien world whose green-skinned people show more buttocks than Torchwood and whose history of exploitation is a mash-up of Native Americans, Irish nationalism and, as you’re about to discover, the subtle tribal characterisation of King Kong. At least when Kroll the massive tentacled beastie does eventually rise from the depths he’s rather impressive (and has a well-conceived life cycle). Before he does, we’re given what looks like a traditional ‘monster reveal’ cliffhanger at the end of Part One, but is actually something stranger, cleverer, and at first glance a little disappointing: while several of Bob’s cliffhangers are stunning moments let down by lacklustre resolutions the following week, for this one time only it’s the reverse of instant gratification. As Romana (Mary Tamm) struggles on the Stone of Blood and the Doctor (Tom Baker) paddles through the swamp to find her, there’s memorable dialogue from the Tribe. This time with the actions. It’s no double act, and it may be memorable for all the wrong reasons, but I still can never help but sing along to The Kroll Song as the Tribe do aerobics with spears, stamping and thrusting and giving it some welly to summon their god. It’s a sort of ritual chant:

Repeat twenty-five times, or until cliffhanger.

Today’s other bonus was first broadcast back in 1979, in between the other two choices, and though technically it’s not a monster rising from the depths, here we have a villain from the depths of time, traced back to the ocean floor before it was ocean, and who looks very tentacular when not looking like the fabulous Julian Glover. So it counts. And while this story is another to feature marvellous images and marvellous music, this time I’ve picked a line of drawing-room comedy dialogue. The script is credited to “David Agnew” – in truth, a mixture of Graham Williams, David Fisher, the actors and perhaps most prominently Douglas Adams – and towards the end of Part Three, Romana (Lalla Ward) has escaped from the villainous Count Scarlioni – in truth, ancient alien Scaroth, last of the Jagaroth – but returns to his château to find out what he’s up to. She breaks in with the aid of an out-of-his-depth private detective, but they don’t break in terribly successfully. They’re dragged in at gunpoint by a sneering henchman, where Scaroth (Julian Glover) tosses an aside to them with a beautifully underplayed little laugh:

“As soon as the alarm sounded, Excellency – he was halfway through the window, and she was outside. I thought you might wish to speak to them, so I called off the dogs. They cannot be professionals.”
“My dear, it was not necessary for you to enter my house by – ah, we could hardly call it stealth – you had only to knock on the door…”

She’s so utterly impractical, he’s so urbanely villainous, and it always cracks me up.


Next Time… The scariest place for anyone